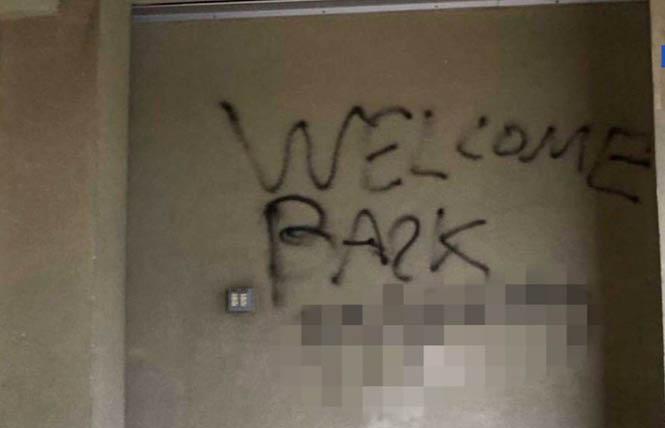 Offensive homophobic and racist language is blurred out from the Halloween graffiti and egging assault on Los Gatos High School. Photo: Courtesy of ABC7 News/Mandy Tu

Los Gatos High School's walls and windows were awash in homophobic and racist slurs as vandals allegedly attacked the school on Halloween night. The incident follows some heated Town Council meetings where the mayor was targeted by right-wing demonstrators.

In the Halloween incident, some of the hateful slurs targeted specific staff and teachers. The alleged vandals also threw eggs at the school's walls, the yolks and whites dripped down the side of the walls on nearly every building on the campus, said Los Gatos High School's new principal, Kevin Buchanan, reported ABC7 News. Buchanan started in the position July 1.

The alleged vandals even smashed a student's giant 529-pound Half Moon Bay Pumpkin Festival winner that was displayed next to the high school court entrance, he said. Buchanan was alerted by the custodial staff, who arrived at the school at 6 a.m. November 1.

Security video captured three separate groups of hooded and masked people in action between 7 and 8:30 p.m. October 31, reported KTVU News. They recorded the alleged vandalism on their smartphones, Buchanan told reporters. He believes the videos will appear on social media.

Buchanan believes at least 15 people, who might be current or former students based on their clothing and bodies in the video, were involved, he told the media outlet.

No arrests have been made in the incident, Sergeant Katherine Mann of the Los Gatos-Monte Sereno Police Department, wrote in an email to the Bay Area Reporter.

Los Gatos High School and the Los Gatos-Saratoga Union High School District turned over the security footage and are working closely with the town's police department.

The most disturbing moment came during the third wave of the attack on the school.

"They spray-painted racist and homophobic slurs across campus," Buchanan told ABC7 News. "And in some cases, targeted specific teachers by name on their classroom walls [and] windows."

Buchanan called it a "sinister element" on the school's campus and that it was "disheartening to our staff and students," in his public plea for help to catch the perpetrators in a YouTube video.

Still, the school's five full-time onsite social workers and therapists, along with virtual therapy provided by Talkspace, are available for staff and students, Grove said.

Possibly part of a larger problem
The attack on the local high school appears as though it might be a part of a string of hate-filled graffiti attacks on the town within the past eight weeks, said Grove.

Grove did not identify the staff member. He could not confirm if any of the high school's staff or faculty targeted in the incidents identify as LGBTQ.

Grove believed two suspects in earlier graffiti attacks in the town were given citations or arrested.

No arrests were made in these other incidents and it is not known if there is a connection.

"Regarding the connection to the other cases we have seen around town, we are looking for a nexus between them, but we cannot confirm that they are related at all," wrote Mann.

She wrote that the high school incident is currently "under investigation," along with other incidents in Los Gatos.

Shaken up
Los Gatos, which is nestled at the base of the Santa Cruz Mountains in Silicon Valley and is home to Netflix's headquarters, has a population of more than 30,700, according to the United States Census Bureau's most recent population count in 2019.

The charming postage-stamp town was shaken up in October. As the B.A.R. previously reported, when Mayor Marico Sayoc and her family were threatened by a vocal anti-vaccine and anti-LGBTQ group. Sayoc, who is an LGBTQ community ally and the only person of color on the council, reported ABC7 News, did not respond to the B.A.R.'s request for comment.

Grove stated that the Town Council has been tackling diversity, equity, and inclusion issues. Not everyone is happy about the council's initiatives, leading to some "very contentious" council meetings as diversity has been a "frequent" topic, Grove said.

The high school implemented a diversity awareness and sensitivity program in 2017, in response to two racist "promposals" and a swastika painted on a bathroom door in 2016, reported the Mercury News.

The program is ongoing, integrating diversity education throughout the school's curriculum and facilitating open dialogue "setting clear expectations to how we treat each other in the community as well as while they are at school," Grove said.

The school hadn't seen anything to the scale of the racist and homophobic vandalism on October 31, he said.

"There's a little bit of anger," Buchanan told KTVU News. "There's a great deal of sadness that this is still going on in this day and age."

Grove expressed that it "doesn't matter" which community you live in, "there are individuals who hold hateful views," and schools are a "microcosm of a broader community."

Grove told the B.A.R. that the hateful vandalism and other assaults are a community, as much as a national, issue.

"We ... can't hide from the fact that it does exist in our community," Grove said. "We need conversations and to address it when we have incidents like this."

The school district has worked with community leaders "who are influential in the lives of our young people" as well as area elementary and middle schools to set the community's expectations and values, he said.

"We are not going to be successful if this isn't a community-wide effort," Grove said.

California state Senator Dave Cortese (D-San Jose), told the B.A.R. that the situation in Los Gatos reflects the broader statewide and national partisan debate and contention. He called it a "reflection on democracy," that in recent years has escalated to being "violent or quasi-violent."

"I think that we all need to take a step back and say, 'We can't let the national political scene or the statewide political scene or any escalation of partisan debate on the national stage become an excuse locally for us and our citizens and children behaving in this way,'" Cortese said, expressing concern for students, residents, elected officials, and municipal employees. "It is misbehavior, and I don't say that in a paternalistic way, it is misbehavior relative to a civil society and what we expect of a civil society.

"The situation in Los Gatos has definitely tipped the scale toward enforcement and further articulation of the rules so we can prevent this from happening," he added.
Cortese said he and gay Assemblyman Evan Low (D-Campbell) are examining rules at public meetings to "tighten up" ambiguities for what is considered appropriate conduct at meetings.

Low, who serves as chair of the California Legislative LGBTQ Caucus, agreed with Buchanan in a statement to the B.A.R. Monday.

"We cannot sit back and let acts of vandalism, racism, and hate speech go unchallenged, especially when our schools are being targeted," stated Low, whose district includes Los Gatos. "This attack was designed to intimidate and inspire fear, but the truth is the perpetrators are the ones who are scared of us. They know our diversity and commitment to inclusion only make us stronger. I trust that the Los Gatos community will rally together and continue to stand in solidarity against all forms of hate."

Cortese said the state has a "zero tolerance" policy for hate speech. The incident, especially the hateful graffiti, could be elevated to a hate crime enhancement for both disciplinary actions by the school and law enforcement charges when the perpetrators are identified.

Disciplinary action, such as suspension or expulsion, separate from law enforcement's actions, could be on the table for the school's board of trustees and district — if students from the high school or neighboring schools are found to have been involved, Cortese said. The repercussions of being found guilty could have long-term effects if the suspects are students.

Enough is enough
"Help say, 'Enough is enough,' and join us in the fight against this kind of intolerance and prejudice," Buchanan said in his video.

"Unless somebody helps us take a stand here or comes forward, I am afraid that this will continue to be repeated and the perpetrators will become more brazen," he continued, encouraging people to come forward with information about the incident.

Buchanan believes there are students who know "who committed these harmful acts and may have seen social media posts on Snapchat or TikTok yet are remaining silent," reported the Mercury News.

He asked parents to speak with their children and encourage "them to come forward if they know anything."

Buchanan's video plea for the community's help, along with Grove's email to parents and district staff, received a positive response.

Grove said it "indicates to us that people care about the school and that they don't want this kind of behavior at their school."

The school district will pursue the alleged vandalism of the school and the teacher's home as hate crimes in any disciplinary decisions separate from law enforcement's actions if any current students were involved, Grove said.

Grove is turning the incident into an educational opportunity.

"It gives us the opportunity to build awareness," Grove said about the hateful vandalism.

In his email to parents and school district staff, Grove provided a resource, "Empowering Young People in the Aftermath of Hate [LINK: https://www.adl.org/education/resources/tools-and-strategies/empowering-young-people-in-the-aftermath-of-hate-in]."

The school district is hosting an event, Los Gatos United Against Hate, Sunday, November 14, at 2 p.m.

Updated, 11/9/21: This article has been updated with comments from state Senator Dave Cortese and Assemblyman Evan Low.