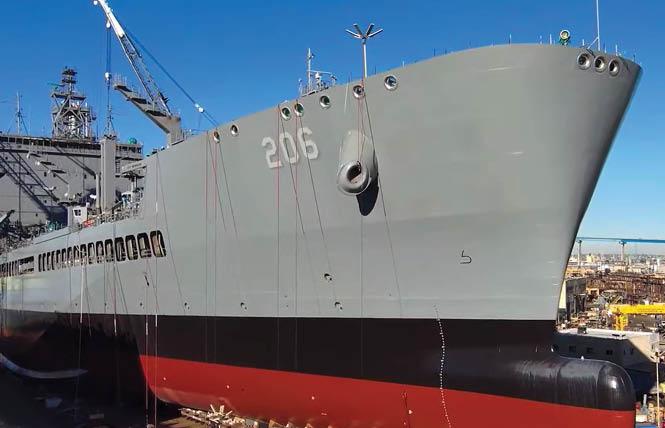 At a November 6 ceremony in San Diego, Navy Veteran and Clinical Program Director of the Johns Hopkins Center for Transgender Health Paula Neira christened the Navy's USNS Harvey Milk (T-AO 206) by breaking a bottle of sparkling wine across the bow in a time-honored naval tradition. The Navy's Military Sealift Command will operate it.

"Leaders like Harvey Milk taught us that diversity of backgrounds and experiences help contribute to the strength and resolve of our nation. There is no doubt that the future Sailors aboard this ship will be inspired by Milk's life and legacy," noted Secretary of the Navy Carlos Del Toro, who attended and spoke at the ceremony.

Neira said the ceremony was "about family and about duty. Harvey Milk represents both. This message about family is about us giving hope to the us-es, not just the LGBTQ community, all of the people who have not been welcomed to military service in our history and our country."

Del Toro said he needed to be there "to amend the wrongs of the past" when LGBTQ people were drummed out of the military and barred from serving openly and proudly.

Today, he said, "We need to give inspiration to all our LGBTQ military leaders who serve in the Navy today and civilian force and tell them we are committed to them and their future."

As for Milk, Del Toro said he set an example "for all Americans as the life he lived in the Navy and the life he lived afterwards was truly exemplary." He added that Milk is the sort of "Naval leaders we need." 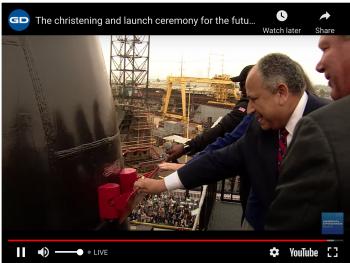 Rear Admiral Michael Wettlaufer, commander of Military Sealift Command, called it "a remarkable day" and noted the Milk oiler will ensure the freedom of access to international seas and the rules based international order.

"Having Harvey Milk as namesake for this ship as she adds to our nation's strategic advantage in agile logistics is absolutely awesome," said Wettlaufer. "With enhanced capabilities for cargo storage and delivery of fuel, Harvey Milk will support our Navy in the away game as we keep our country safe far from home and protect the sea lines of communication."

In 1977, Milk became the first out LGBTQ person to win elected office in both San Francisco and California. Yet he was gunned down 11 months into his first term on the morning of November 27, 1978 inside City Hall along with then-mayor George Moscone by disgruntled former supervisor Dan White.

Since then Milk has become a beloved gay luminary around the globe. The Navy had announced in 2016 that one of its fleet replenishment oilers would be named in his honor.

Gay San Diego city and county commissioner Nicole Murray Ramirez, who as the Queen Mother I of the Americas and Nicole the Great is the titular head of the court, first thought of the proposal after the repeal of the military's homophobic "Don't Ask, Don't Tell" policy, which marked its 10th anniversary on September 20. With the navy secretary the lone person who has final say over naval ship names, Murray Ramirez had the court's 70 chapters across North America send letters from its members and local officials in support of a Milk ship.

In September the B.A.R.'s Political Notebook column broke the news that the Milk ship would launch this month. It did so from the General Dynamics National Steel and Shipbuilding Company's shipyard in San Diego where it has been under construction. Various LGBTQ dignitaries and elected leaders from across California attended the morning ceremony, as did Mabus.

Stuart Milk said his uncle was proud to carry on their family's tradition of serving in the Navy. While the 2011 end to the homophobic military policy known as "Don't Ask, Don't Tell" that prevented LGBTQ people from serving openly was about "tolerance," he said the ship naming was about honoring not only his uncle but all LGBTQ veterans and military service members.

"Today, we are celebrating something much bigger than tolerance," he said, it means the "Navy not only recognizes but honors those... so this Navy ship sends an important message to the world."