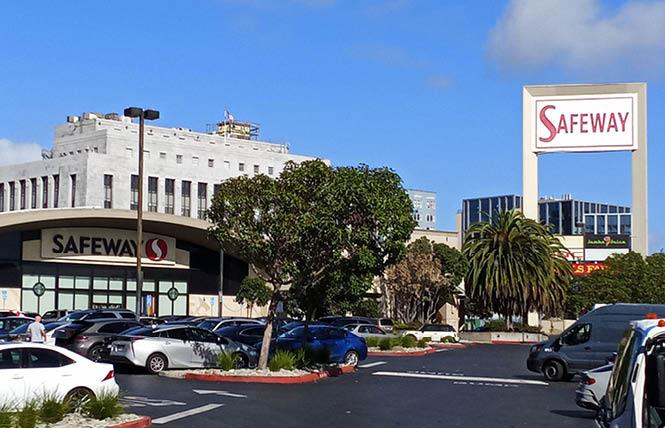 The Safeway on Market between Church and Duboce streets reduced its hours and now closes at 9 p.m. Photo: Scott Wazlowski

Members of the Castro Merchants Association at their November 4 meeting expressed dismay with a recent decision by Safeway to reduce hours at its Castro-area store due to increased shoplifting.

Dave Karraker, a gay man who is a merchants board member and co-owner of MX3 Fitness on Market Street, was upset about the recent news that the Safeway on upper Market Street between Church and Dolores streets will no longer be open 24 hours a day due to what Safeway called "out of control" theft of its retail items.

The reduction in hours at the Safeway comes on the heels of Walgreens' announcement it is closing five more San Francisco locations as a result of rampant theft, though Mayor London Breed and District 5 Supervisor Dean Preston speculate it may have as much to do with cutting costs and consolidation, based on a 2019 Securities and Exchange Commission filing, as SF Gate reported.

City leaders, such as Breed, suspect that organized crime is responsible for much of the retail theft — and the car break-ins that have also made the headlines.

"What is the full-court press to make sure Safeway doesn't leave that location," Karraker asked.

Gay District 8 Supervisor Rafael Mandelman said that, first of all, the theft and property problem in San Francisco "is unquestionably real."

"There is a huge amount of shoplifting," Mandelman said. "They [Safeway] reached out to me before they made this announcement and the stories they told are harrowing."

Mandelman said that he is going to convene a meeting with the police and the district attorney's office to figure out a plan to address the problem of theft at Safeway, which also affects other locations such as the Potrero Hill Safeway, which currently closes at midnight.

The late night closure makes it difficult for low- and middle-income residents to find affordable grocery options at times convenient for them, Mandelman said.

One potential stopgap measure currently being explored by the Board of Supervisors, Mandelman said, is allowing sheriff's deputies to work as 10B officers. The 10B program allows businesses, among others, to hire off-duty police officers as private security at time-and-a-half pay.

Mandelman said that while it's unacceptable that officers would decline to take crime reports because the DA's office may opt not to prosecute, people need to keep their eye on the whole criminal justice system to address the problem of retail theft.

"What is the DA doing and what are the judges doing?" he encouraged people to ask.

Mandelman said that while it's a matter of city policy that alleged shoplifters are arrested, perhaps they should be cited, and multiple-time offenders arrested.

Karraker speculated that many items stolen at the upper Market Safeway are available for purchase at the 24th Street BART station, and asked why police don't shut down the open-air markets there and at other locations.

"It's not as easy as you'd think," San Francisco Police Department Captain Rachel Moran, who oversees Mission Station, responded, continuing that the police would have to check with Safeway to make sure the item was stolen from there, that the department might be stepping on BART's jurisdictional area, and that SFPD is currently not enforcing laws about vending without a permit.

Senate Bill 946, the Safe Sidewalk Vending Act, which was signed into law by then-Governor Jerry Brown in 2018, prohibits jurisdictions from imposing criminal penalties for sidewalk vending and from imposing regulations on the practice "within specific parts of the public right of way."

Moran leaving Mission Station
Moran, a straight ally who started leading Mission Station February 20, announced she is departing the station. She doesn't know where she'll be going next but said she's on to "bigger and better things."

Moran also introduced Castro Merchants members to Lieutenant Gavin McEachern, a 32-year veteran of the force, who was her first choice to succeed her as interim captain.

Moran thanked the merchants for challenging her.

"I wanted to thank everyone from the bottom of my heart," Moran said. "You guys have really challenged me, and you can't fault someone who wants to make their neighborhood better."

Moran and the SFPD did not immediately answer a request for comment regarding the nature of Moran's departure and when it is effective. An August news release from the department indicated Moran had been promoted to commander.

2 Assembly candidates open Castro offices
The meeting had an unusual guest — District 6 Supervisor Matt Haney, a straight ally who's running for the state Assembly seat vacated by David Chiu following his appointment to the office of city attorney, which occurred November 1, as the B.A.R. reported.

Haney spoke because he is opening a campaign office in the old Pottery Barn building at Market and Castro streets. A party to celebrate the office's opening will take place November 10. Haney subsequently told the B.A.R. it starts at 5 p.m.

Karraker told Haney that "your first job is to find a person to rent or buy the building you're about to be housed in." The building, on a prime stretch of property in the Castro, hasn't been a Pottery Barn since 2017. It has been floated as the proposed site of an LGBTQ history museum, the B.A.R. reported two years ago.

"To everyone who comes in and says 'this is a great building,' I'll say 'you should think about it long-term,'" Haney said.

Campos also has his campaign office in the neighborhood, at 541 Castro Street. He will have a kickoff party Saturday, November 13, at 11 a.m., according to a campaign email.

"I understand why Supervisor Haney is coming to the heart of the LGBTQ community to get support — but as the only openly gay candidate in this race, I can tell you that I have been involved in this community for decades and that's why I have support from so many LGBTQ leaders — such as Supervisor Mandelman, former Supervisor Bevan Dufty, [former] state Senator Mark Leno and [former] state Assemblyman Tom Ammiano, as well as from the Harvey Milk [LGBTQ] Democratic Club," Campos said.

Selby told the B.A.R. November 5 that Haney and Campos opening their offices in the Castro is good for the neighborhood.

"It's reminiscent of when I ran for supervisor in District 5, when we all lined Haight Street," she said. "I mean it's good for the Castro, right? They'll get more foot traffic and people."

Mahmood did not respond to a request for comment.

Correction: November 4 at 5:02 p.m.: The original version of this story mischaracterized Supervisor Rafael Mandelman's position on citing or arresting alleged shoplifters and has been updated.

Updated, 11/5/21: This article has been updated to include that outgoing Mission Station Captain Rachel Moran was promoted to commander and comments from Thea Selby.

Updated, 11/10/21 at 11:01 a.m.: The original version of this story reported that San Francisco Police Department Captain Rachel Moran stated officers have less discretion than they used to about where they can work as 10B officers. Moran made this statement based on an expectation rules were about to change. However, Moran clarified to the B.A.R. that command staff decided shortly after her remarks at the merchants meeting that officers will continue to have as much discretion as before.