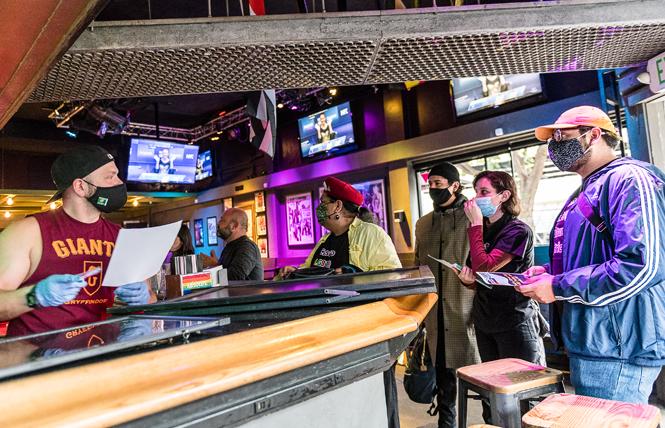 In an effort to understand the effects of displacement in the neighborhood, the Castro LGBTQ Cultural District has begun collecting the sexual orientation and gender identity data of business owners within its footprint, District Manager Tina Valentin Aguirre told the Bay Area Reporter.

"It was our idea because when I started with the organization last year, I'd met with the Castro Merchants and the [Castro/Upper Market Community Benefit District] and I asked some questions around the work they were doing and I wanted details around statistics and demographics relating to SOGI data," Aguirre, a genderqueer person, told the B.A.R. "What I quickly learned was that neither of those groups collected that data. For me, that data is the minimum of what's needed in order to understand the impacts of gentrification and the displacement of LGBTQ people."

The move comes at a time when public entities are being pushed in the direction of more SOGI data collection. As the B.A.R. previously reported, the San Francisco Board of Supervisors approved legislation allowing for the collection of the SOGI status of the city's workforce and people who apply for jobs with it.

Andrea Aiello, a lesbian who is the executive director of the CBD, had no comment when asked about the effort. Neither did Nik Blanchet, a spokesman for the Castro Merchants Association, who stated "we don't have a comment on the cultural district's SOGI data project, no. We do not currently collect this data for our members, but we are in the early stages of considering reliable, maintainable ways to do this in the future."

Aguirre said that the data will be used in the district's Cultural History, Housing and Economic Sustainability Strategies, or CHESS, report, which will be presented to the supervisors next year.

"This [writing a CHESS report] is part of the work that all eight cultural districts do," Aguirre said, adding that each district is doing its own report that will be compiled into a single compendium.

Each district gets to identify its own priorities, and Aguirre hopes the data will be "shared with the planning department, the arts commission and the Office of Economic and Workforce Development, which have to date struggled with some of the needs of the cultural districts."

The city departments did not respond to requests for comment.

The 24-page report discusses what the district did in 2020 to respond to the COVID-19 pandemic, such as its relief fund and testing efforts; its entrepreneurship accelerator program; its participation in land use meetings of city agencies; and its advocacy for tenant protections.

Robert Goldfarb, a gay man who is the executive director of the Leather and LGBTQ Cultural District, told the B.A.R. that the leather district didn't know that the Castro cultural district would be collecting SOGI data.

"It was not something we were planning on doing," Goldfarb said, adding that the leather district will be including in its CHESS report the results of "a number of focus groups, town hall meetings, and individual interviews. We have tried to talk to the different demographic segments of the community, so we are trying to get information that comprises what the community is looking for us to do."

Alejandro Barrientos, a 23-year-old gay man, and Hanelye Mazariegos, a 23-year-old pansexual woman, are surveying businesses. They are receiving college credits, having been recommended by San Francisco State University assistant professor Jen Reck, a queer woman who is collaborating with the district.

"The students are doing an internship as part of their capstone requirement for their sociology major at SF State, and I'm the instructor of the course," Reck stated to the B.A.R. "The goal of the internship class is that students learn from and serve our communities, apply sociological thinking to community work, and gain practical experience.

"I am a research collaborator with the Castro LGBTQ Cultural District, conducting a participatory action research project focused on learning about the [district's] social change work in the Castro," Reck continued. "As a collaborator, I assist the [district] in data collection projects that will help them pursue their mission of cultural preservation and equity in the Castro. I helped connect these student interns with the [district] so that the interns could gain practical experience working with an LGBTQ-focused social change organization and the [district] could build its volunteer program. The interns are helping the [district] complete a data collection project that will provide important information about the neighborhood's businesses."

The students started their work October 20. Aguirre said they will be trying to collect data for business owners, management, and employees.

"We have plans to have interviews with the business owners and plan to take notes down on paper during those interviews," Mazariegos told the B.A.R.

If people aren't available to speak at the time they arrive, they'll return after finding out when business managers and owners will be available, the students said.

"We're hoping to go door-to-door and collect the availability of folks," Barrientos said. "I'm excited to be one of the first interns for this cultural district."

After their first day October 20, Barrientos stated to the B.A.R. that he was nervous to start.

"As we started, those nerves subsided," he wrote in an email. "Going to all these businesses and being met with nothing but kindness was really reassuring. With the first day going as well as it did, I look forward to continuing the project and meeting all these businesses alongside Hanelye."

Mazariegos stated that the pair visited 17 businesses so far.

"It was nice to see how much every business was proud to be either an ally for the LGBTQ community or proud to be directly part of the community," Mazariegos wrote. "Most if not all the businesses we spoke to were open and willing to answer our questions and many were interested in the data collection and how this data would benefit the community. Overall, good experience and I'm looking forward to speaking with more businesses."

One of those businesses was Auto Erotica on 18th Street, owned by Patrick Batt, a gay man.

"They seemed very earnest and very easily rolled with my comment on how people of my generation reacted to the word queer as a negative," Batt stated to the B.A.R. via email. "I did ask if they were interested in hearing my opinion of the Saturday closure of the Walgreens parking lot for vaccines. They said that was not part of their assignment. I asked them how the reactions had been going to the sexual orientation questions and they indicated they were going well with both straight and gay responses. They left a brochure. The entire interaction took less than five minutes. In retrospect I wondered about and should have asked why the district would be asking about orientation and what they were going to do with the results."

In June, Intentionalist announced that new guides in Apple Maps will help consumers connect to LGBTQ-owned small businesses in five cities, including San Francisco. In the Castro, LGBTQ-owned businesses on the site include Skin on Market, Castro Tattoo, and Hi-Tops. For more information, go to https://intentionalist.com/