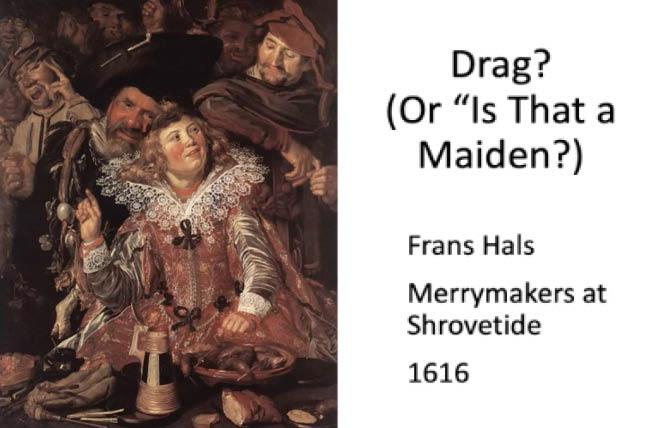 Classicist Andrew Lear believes that "Merrymakers at Shrovetide," which was painted in 1616 by the Dutch artist Frans Hals the Elder and will be featured in Lear's "We Were There" tour, depicts someone who is gender-nonconforming. Photo: Screengrab

How did a woman stand up to a patriarchal society to become an Egyptian pharaoh in the 15th century B.C.? And did an artist portray a boy in drag in the 17th century?

These questions and more will be examined at a new tour at the Metropolitan Museum of Art in Manhattan that will highlight LGBTQ and women's history that opens later this month.

Andrew Lear, a gay man and classicist based in New York, guided members of the media through a sneak preview of "We Were There" October 29.

Lear, a former professor at Harvard, Columbia, and New York universities, has researched gender and sexuality in ancient Greek culture for decades. He founded Oscar Wilde Tours in 2013, giving tours of both Greenwich Village and the hidden references to homosexuality in different museums — including the Met.

"All of this grew out of a very simple conversation," Lear said during the media preview. "I was taking a tour in New York next to a guy, and he said he'd given a tour at the Metropolitan Museum that morning and I said 'you can do that?' I knew as a professor that I could bring classes to the Met but I didn't know as a private individual I could do tours."

At the same time, Lear was asked to lecture by an LGBTQ alumni association in New York, and he asked the group if instead he could do a tour of the Met for them, he said.

"We Were There" brings the two concepts together. Lear hopes to show through the tour how women and LGBTQ people both were able to face challenges in their own times.

Lear said that the precise definitions available to queer and other gender-nonconforming people today to define themselves were not there for most of human history, but that doesn't mean they were any less influential than heterosexual European males.

"If you look carefully at the art in the museum it shows you something about history," Lear said. "There were people — the terms we use today, the identities we have today don't match up precisely with the identities of people in the past, if they even had what we'd call identities — but certainly there were people in the past [with which] LGBTQ and also powerful and ambitious women and powerful and ambitious people of color, can identify."

One of those might be Queen Hatshepsut, who was the pharaoh of Egypt from 1479 to 1458 B.C. The Met has a gallery and a half of material about Hatshepsut, Lear said.

Hatshepsut ascended to the throne at the death of her husband Thutmose II because their son, Thutmose III, was only an infant at the time and thus couldn't rule in his own right. Eventually, however, Hatshepsut stopped ruling in her son's name (as a regent) and became a pharaoh in her own right.

Thus, she was often portrayed as a man in art, including in one of the Met's sculptures of her.

"She is wearing the fake beard the pharaohs wore," Lear said. "She's naked from the waist up and she does not have breasts but she does have pecs. ... This led many people to think Hatshepsut dressed as a man, but obviously she could not dress as a man from the waist up, so we really don't know."

However, sometimes Hatshepsut was portrayed as a woman. Another sculpture in the Met of the pharaoh shows her without a fake beard and with breasts. She is wearing the striped headdress of the pharaoh, which, of course, was made most famous in Western culture by the death mask of King Tutankhamun, who reigned about a century after the death of Hatshepsut.

"Specifically this [sculpture] is from a giant funerary temple to Hatshepsut," Lear said. "She is called often by historians 'the first powerful woman in the world,' but of course there was already pushback against her."

When Thutmose III became pharaoh he led a campaign of defacement against likenesses and statues of Hatshepsut, emphasizing the kingdom's return to male rule.

Another piece of art in the Met, "Merrymakers at Shrovetide," was painted in 1616 by the Dutch artist Frans Hals the Elder. Lear insists it depicts someone who is gender-nonconforming.

"Just as ancient Greek men had mentoring and affairs with younger guys is what we think of as gay today ... a boy actor in drag in 17th century Holland is also not what we think of as trans, but these are our past," Lear said. "It's a boy actor in drag. That's my view anyway. For a long time the Met referred to this figure as a maiden. Indeed, I have heard scholars refer to her, or him, as a maiden quite recently but I don't think so."

Lear explained why he believes this.

"Right there, under the chin, this maiden has an Adam's apple," Lear said.

Another hint at the queer implications of the painting is in the name: Shrovetide is perhaps better known today as Carnival or Mardi Gras.

"It's a Mardi Gras party," Lear said. "In fact, look at him. He's wearing beads. He has beads around his neck and both wrists. He's dressed in a costume. What's going on with this boy in drag is either the guys around him are making passes at him, or pretending to make passes at him."

A clue in those men's intentions perhaps can be found in what was then considered an obscene gesture being made by a man in the back.

"So I think they're saying, 'yeah you're a queen? Let's go to the back and find out,'" Lear said.

The tour will take place November 20 at 2 p.m. Eastern Time beginning at the statue of Pharaoh Amenhemet II in the museum's great hall. Tickets are $69 and are available on Eventbrite.