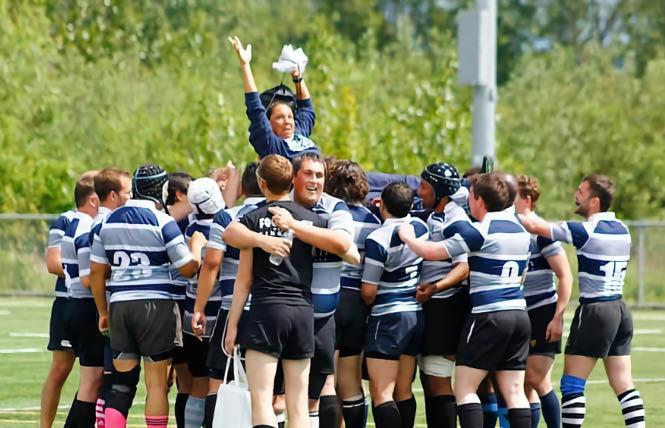 Ms. Flores, a lesbian, was a member of the USA women's rugby team, the Eagles, which won the 1991 Women's Rugby World Cup Championship.

Tara Flanagan, an Alameda County Superior Court judge, was also a member of that championship women's rugby team, and told the Bay Area Reporter that Ms. Flores was passionate about the sport.

"She was a great player and a great teammate — she was often that indescribable ingredient to a team that provides the spark, the glue, the mojo," Flanagan, who is a lesbian, wrote in an email. "When she was on your team, it elevated your belief that you would/could win."

Flanagan stated that in addition to that 1991 championship year, she played with Ms. Flores on the U.S. women's team in the Women's World Cup in 1994, when they came in second.

"She was a great world champion," Flanagan stated.

"I had always wanted to coach the Fog," Ms. Flores told the B.A.R. in a 2013 interview while with the team. "I love the sport and I want to expose as many people to it as I can, particularly young women. It's important for their confidence and self-esteem. With college girls, after playing rugby, they start thinking better of themselves and realize what they can do better. You see them walk into interviews differently. Working with gay men, I see the same things. After playing a little bit of sports, there's a whole change in how they see themselves, kind of like a flower blooming."

Dany Samreth, the current coach of SF Fog, wrote that Ms. Flores was a great coach, mentor, and friend.

"I didn't get to be as close to Kathy until we pitched her the idea of coaching the SF Fog in 2010. It was akin to asking Phil Jackson to coach a university side, but to my surprise she agreed to take on the challenge, especially as working on a team with queer issues in playing a sport that wasn't as welcoming to us when the SF Fog started," Samreth wrote in an email. "The F-word has been used many times on the pitch when we began and even currently by a local SF team in our last local regular season match against them."

Until Ms. Flores began coaching the team, SF Fog had been a force in International Gay Rugby, but not as strong in its current union, Northern California Rugby Football Union, Samreth explained.

"We had only one winning season and one playoff appearance in the union (which still is the toughest union/region in the country as whoever wins NorCal in any division usually wins the national championship or gets close)," Samreth wrote.

That changed when Ms. Flores came aboard.

"Every season under her we had winning seasons (2011-2013) and made playoffs every single time with an undefeated regular season under her belt," Samreth wrote. "Besides a winning culture, she had everyone from rookie to veteran better themselves not only individually but how to help their teammates out."

Samreth has coached SF Fog since 2014.

"With her guidance, I also was selected for a great opportunity to coach a Northern California Select (All-Star) Women's Rugby Team (CA Grizzlies) following in one of her legendary footsteps in one of the many teams she has coached," Samreth wrote. "That CA Grizzlies women's side also have All-Blues Women's team members, which is a club that she led to numerous national championships. Both SF Fog and All-Blues have many in the LGBTQIA+ community that owe their love of rugby to her as well as becoming better people.

"Her legacy lives on as we try to do better in the sport that she loved through all the people she has touched in the players that are still playing, those who are coaching, and those who are supporting the rugby clubs around the country and the world," Samreth continued.

Ms. Flores left the Bay Area in 2013 to coach the women's rugby team at Brown University in Providence, Rhode Island.

Ms. Flores spent the last eight seasons at the helm of the Brown program following an illustrious playing and coaching career across the country. She was the third female inducted into the U.S. Rugby Hall of Fame, according to an obituary on Brown's website.

Ms. Flores was born February 7, 1955 in Philadelphia. She earned her bachelor's degree in physical education at East Stroudsburg University of Pennsylvania, where she was a guard on the basketball team and threw javelin for track and field. She switched to rugby while studying for her master's degree at Florida State University and won national titles playing for the Seminoles. She began playing for the first unofficial national women's team in 1986.

The U.S. Women's Rugby Foundation has set up a Kathy Flores Memorial Fund to "provide development of women's rugby coaches and help other coaches like Kathy have an opportunity to influence and impact not only their rugby careers but also the trajectory of the lives of hundreds of girls and women," the website stated. Information about the memorial fund is available at the USWRF's website. The B.A.R.'s interview with her from 2013 is available here. For more on her life, read the obituary here.

In accordance with Ms. Flores' wishes, donations in her memory can be made to the USWRF's memorial fund, local dog shelters, or Southeastern Guide Dogs. A private service and a virtual celebration are being planned.

Jock Talk: SF Fog coach is calm, but in command

Jock Talk: Sports events that happened (and didn't) in 2021
Sign up!