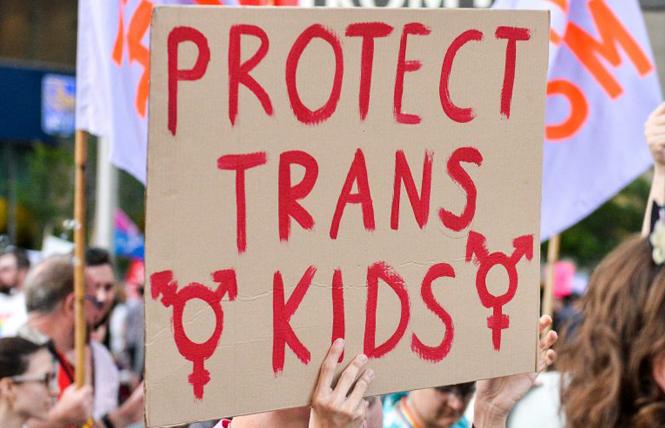 Many states, including Texas, have passed bills to bar trans student athletes from competing on teams that align with their gender identity. Photo: Courtesy Free State Justice

Transgender people across the country, especially kids, find themselves in a dire, existential situation in 2021. Much like 17 years ago, when gays and lesbians were targeted by 11 states that passed same-sex marriage bans in 2004, trans people are under increasing attack by lawmakers in red states who think they can tell their constituents how to identify — and by that we mean they are forcing trans people to identify with the sex they were assigned at birth. The latest salvo occurred in Texas, where legislators passed House Bill 25. Like similar laws already passed, HB 25 bars trans student athletes from competing on the team that aligns with their gender identity. Instead, they are only allowed to participate on sports teams that correspond to the gender on their birth certificate. The Texas Senate hurriedly passed the bill, suspending its own rules — which is reminiscent of the action Lone Star State lawmakers took on a restrictive voting rights bill earlier this year that was signed by Governor Greg Abbott (R). Look for Abbott to sign HR 25 too. According to the National Conference of State Legislatures, at least 35 bills have been introduced in 31 states this year to exclude transgender youth from participating in sports. That's up from 29 bills in 2020 and just two in 2019, according to the conference.

The Biden administration weighed in this week. "This hateful bill in Texas is just the latest example of Republican state lawmakers using legislation to target transgender kids — whom the president believes are some of the bravest Americans — in order to score political points," White House spokesman Ike Hajinazarian told the Dallas Morning News, according to a release from the Human Rights Campaign. "These anti-transgender bills are nothing more than bullying disguised as legislation and undermine our nation's core values."

Equality Texas blasted the Legislature's action. "This cruel and grotesque ban puts a target on the backs of transgender children and adults, erases intersex people, and sends a clear message that transgender and intersex people aren't welcome or safe in Texas," the organization stated. It went on to point out that the "debate" over HB 25 "is already exacerbating intolerance, fueling discrimination, and solidifying Texas' reputation as the leading state for violence against transgender people."

Supporters of these anti-trans laws contend they are needed because trans women and girls have a physical advantage over cisgender women and girls. There's a lawsuit out of Connecticut right now that's being heard by the 2nd U.S. Circuit Court of Appeal where cisgender student athletes argue that a policy adopted by the Connecticut Interscholastic Athletic Conference violates their constitutional rights. The policy at issue allows transgender student athletes to play gender-segregated sports in line with their gender identity, and are not forced to play based on their sex assigned at birth. A lower court judge dismissed the lawsuit, but the plaintiffs have appealed. Last week, California Attorney General Rob Bonta joined attorneys general in 19 states and the District of Columbia in filing an amicus brief supporting the freedom of transgender students to participate in sports in line with their gender identity.

In an article in Scientific American earlier this year Jack Turban, a child psychology fellow, noted that he spends a lot of time with kids.

"They have many worries on their minds: bullying, sexual assault, divorcing parents, concerns they won't get into college. What they're not worried about is transgender girls playing on girls' sports teams," he wrote. He also stated that there's no scientific evidence for excluding trans women and girls from sports teams. In fact, he wrote, in the aforementioned Connecticut case, one of the cisgender girls beat one of the transgender girls in a state championship. "Attempts to force transgender girls to play on the boys' teams are unconscionable attacks on already marginalized transgender children, and they don't address a real problem," Turban wrote. "They're unscientific, and they would cause serious mental health damage to both cisgender and transgender youth." He also pointed to California's law, passed in 2013, that allows trans youth students to play on sports teams that match their gender identity. Unsurprisingly, there have been no issues, he stated.

Anti-trans extremists have made it their mission to attack children, spread misinformation, and stoke fear among the public, Equality Texas stated. The American Civil Liberties Union, Lambda Legal Defense and Education Fund, and other groups are fighting these laws in court.

Youth are proclaiming their gender identity at younger ages than they used to. In many cases, their parents are supportive, making them allies in the fight for equality. Unfortunately, conservative lawmakers continue to stoke baseless fears and tired tropes, all the while making life for trans kids that much more difficult. It's time for these lawmakers to focus on other issues affecting their states, and leave trans youth alone.