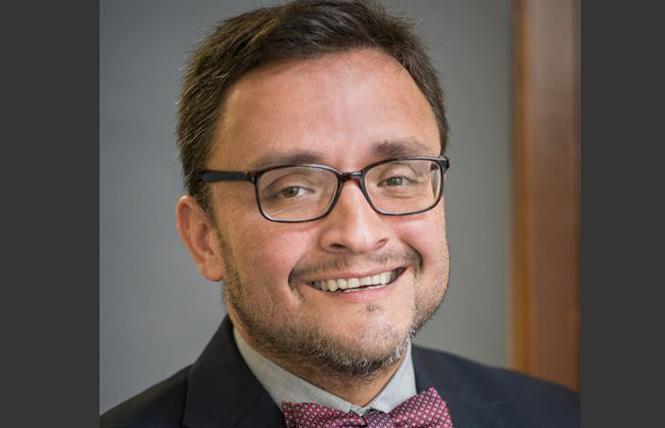 The Harvey Milk LGBTQ Democratic Club is backing gay former supervisor David Campos in the race for San Francisco's open 17th District Assembly seat. The progressive political group's decision October 19 to endorse Campos is a bit of déjà vu, as it had supported him when he first ran for the seat in 2014.

Back then Campos lost to his fellow board colleague David Chiu, who will step down November 1 from his Assembly seat to become San Francisco's first Asian American city attorney. Mayor London Breed tapped him for the position after she named City Attorney Dennis Herrera as the new general manager of the San Francisco Public Utilities Commission.

Herrera will also start in his new position November 1, and Governor Gavin Newsom will then need to call a special election to fill Chiu's Eastside Assembly seat. It will need to be held before March 21, and the winner will serve the rest of Chiu's term through early December 2022.

Campos is a top sponsor of the Milk club's upcoming gala fundraiser Thursday, October 28, serving as a co-chair along with the Golden State Warriors and the National Union of Healthcare Workers. Haney is sponsoring the event at the activist level, while Selby came on board at the advocate level of sponsorship as did Chiu.

Ahead of the Milk club's endorsement process its membership list swelled with supporters of both Campos and Haney.

Earlier this month its political action committee had recommended endorsing Campos, the immediate past chair of the San Francisco Democratic Party who is chief of staff to the city's district attorney, Chesa Boudin.

A reported 51 valid endorsement votes were cast at the club's October 19 membership meeting. Under its score voting process, with members able to score (or rank) the candidates from 0 to 5, Campos ended up with 231 votes, Selby with 38, Haney with 22, and Mahmood 9. At least 129 votes were needed for a candidate to receive a majority and secure Milk's endorsement.

Following the endorsement vote, Milk co-president Edward Wright told the Bay Area Reporter, "Whether you judge the candidates by their track record, their platform, their depth of experience, or the communities they represent, David Campos is the clear choice for AD 17. David Campos is someone who doesn't just follow public opinion, he leads it, and has for decades. We deserve a proven progressive in Sacramento, and the LGBTQ community, immigrants, and the Latinx community deserve to be seen, heard, and represented."

Should he win the seat, Campos will return LGBTQ leadership to the Assembly from San Francisco since Chiu's election seven years ago. A straight ally, Chiu succeeded gay former Assemblyman Tom Ammiano.

"I'm incredibly honored to receive the endorsement of the Harvey Milk LGBTQ Democratic Club, a club that I have been a proud member of for over 20 years," Campos told the B.A.R. "In many ways my campaign for Assembly is about continuing to fight for what Harvey fought for: LGBTQ+ equality, women's rights, racial justice, and above all, giving a voice to the people who have been left out and unheard."

In a texted reply, Haney told the B.A.R. he understands and respects the Milk club's decision to make an early endorsement of Campos.

"I have had a long track record with the club and its members, including receiving the Harvey Milk Club Community Ally Award for my work supporting LGBTQ students in SF schools and introducing LGBT studies," wrote Haney. "I am committed to being a strong ally and champion for the LGBTQ community as an Assembly member, and I have a track record of doing that in every role I've served in. I will continue to work hard to make my case to every voter in San Francisco, including every LGBTQ voter, based on my track record and what I can deliver for San Francisco."

SF school board recall set
With the backers of recalling three San Francisco school board members gathering enough valid signatures to qualify it for the ballot, the city's elections officials announced Monday that the recall vote will be held Tuesday, February 15. Board President Gabriela López, Vice President Faauuga Moliga, and Commissioner Alison Collins, who was ousted from the vice president position earlier this year by her board colleagues, are all fighting to remain on the oversight body for the city's public schools.

Also on the same ballot will be the special election for the city's assessor-recorder. Following a city hall corruption scandal, Breed tapped former assessor-recorder Carmen Chu to be city administrator and named Joaquin Torres as her successor. He now needs to seek election to serve out the remainder of Chu's term through early January 2023 and will need to run for a full four-year term next November.

The city's charter requires local offices to appear at the next scheduled election occurring at least 120 days after the date of the vacancy. It is possible that Newsom will also time the special election for Chiu's Assembly seat with the special municipal election and recall in February.

Two SF electeds launch campaigns
Boudin, elected to a four-year term in 2019, is also facing an attempt to recall him from office. An earlier recall attempt failed to gather the necessary signatures this summer.

One of several progressive DAs across the country who have faced vocal complaints since their elections, Boudin is launching a preemptive strike against the second recall drive against him. While it was initially to be held outside of City Hall, his supporters will now begin gathering at the SEIU 87 Union Hall at 240 Golden Gate Avenue at 11:30 a.m. Thursday, October 21, to officially kickoff Boudin's anti-recall campaign.

Among those backing Boudin are the SF Rising Action Fund, the Milk club, and gay former state Senator Mark Leno (D-San Francisco), who is scheduled to speak at the event. It will officially begin at noon.

On Monday, October 25, gay District 8 Supervisor Rafael Mandelman will kickoff his 2022 bid for reelection at Poesia, an Italian restaurant in the heart of San Francisco's LGBTQ Castro district. It will double as a birthday party for Mandelman, who turned 48 October 17.

Mandelman, the lone LGBTQ person on the Board of Supervisors, is running again for another four-year term. He decided against seeking Chiu's Assembly seat, and if reelected to his supervisor seat, he will be termed out of office in January 2026.

To RSVP for his birthday/campaign kick-off event click here.

UPDATED 10/20/2021 with the new location for Boudin's anti-recall campaign kickoff.