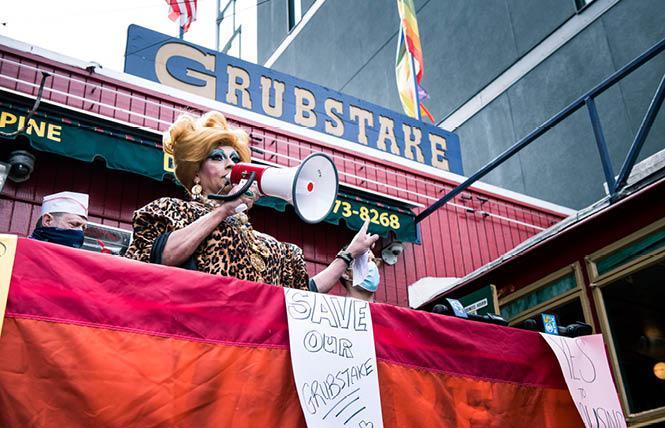 The San Francisco Board of Supervisors October 19 unanimously voted to reject an appeal for the Grubstake Diner project, which will allow for restoring the late night eatery and constructing 21 units of housing — to a height of 79 feet — above it.

Grubstake owners Jimmy Consos and Nick Pigott claim that they want to build up because preserving the historically LGBTQ-accepting late night eatery wouldn't be financially feasible without developing housing. For years they've experienced opposition from residents of The Austin at neighboring 1545 Pine Street, who highlighted the negative impacts of shadow on that property and on its residents.

The issue had to go before the full board because the planning commission's July 22 approval of the project was appealed to the supervisors, where it was to be heard October 5 before it had to be pushed back two weeks because a planning department staff member couldn't make it to the initially-scheduled meeting, and there was no meeting October 12 due to Italian American Heritage Day.

The appellants, Patricia Rose and Claire Rose, among other residents of neighboring Austin, alleged that demolishing the existing building would necessarily mean the diner couldn't be preserved as a historic resource, and bemoaned impacts to vehicular traffic and public transportation, as well as the shadow, which the Grubstake owners pledged to mitigate with artificial light.

After the vote, gay District 8 Supervisor Rafael Mandelman stated to the B.A.R. that he was glad to support the project.

"Grubstake is one of the only longtime queer spaces left in Polk Gulch, and the strong advocacy of Juanita MORE!, Donna Sachet, Sister Roma, Gary Virginia and other LGBTQ leaders show just how important the diner is to the community," Mandelman said. "I am glad to join Supervisor [Aaron] Peskin and support a project that creates new housing while preserving a beloved business in his district."

LGBTQ activists rallied for project to go forward
Longtime gay activist Virginia, a former board president of both PRC and San Francisco Pride, joined forces with drag queens MORE! and Sachet to express the LGBTQ community's support for the construction project, pointing out that Consos, a straight ally, is passionate about the history of the place.

Sachet told the B.A.R. at a September 27 rally supporting the Grubstake that Consos is "quite a historian, and his love of this place reignited mine." The menu is a marriage of Portuguese cuisine and breakfast fare, popular with the clubbing crowd after the bars close at 2 a.m.

In July, Cal Callahan, a gay man who is the manager of the Leather and LGBTQ Cultural District, shared his memories of the diner with the B.A.R.

"There was the night when my roommate at the time and I were coming home from a club," Callahan wrote. "Our cab driver decided Grubstake — and I assume the two of us looked so good that he went off-duty and joined us.

"Grubstake has always filled a niche to support late-night entertainment in San Francisco," Callahan continued. "As those options have diminished, each remaining business becomes more and more important."

MORE!, a Polk Gulch neighborhood resident, told the B.A.R. at that time that the LGBTQ community still needs spaces like Grubstake just as the city needs more affordable housing.

Virginia, MORE!, and Sachet promoted both the October 6 and 19 meetings, encouraging callers to make their feelings known to the supervisors.

After the vote, when asked about the supervisors' decision, MORE! revealed another personal anecdote about the place.

"I have spent many early mornings at the Grubstake Diner, eating and laughing while enjoying the burgers and shakes after a long night at the clubs," MORE! stated. "My go-to is The Nugget, a burger with cheese, bacon, and topped with a fried egg; there is nothing more satisfying at 3 a.m.; except for some great sex — which I once had in the bathroom there".

Virginia told the B.A.R. to "Stay tuned for a safe celebration at Grubstake prior to demolition and a ribbon-cutting ceremony when the first shovel breaks ground."

Appellants claimed project would cause health problems
David Cincotta, an attorney speaking on behalf of the appellants, said when the issue came before the supervisors in the early evening Tuesday that the "project sponsors have rallied the LGBTQ community to those opposed to saving Grubstake."

He claimed to have proposed landmarking the space last week, considering the Eagle bar landmarking, which was approved by the Board of Supervisors earlier the same meeting.

"The response from the project sponsor was that the Grubstake should not be landmarked because it was really just a contributory restaurant to the Polk Gulch neighborhood," Cincotta said.

Theresa Calderon, a resident of The Austin, conducted a light study and spoke about the results to the supervisors. Calderon claimed that the light loss will lead to "depression, sleep disruption, and bone density loss" among residents.

Calderon claimed that the light study conducted by the Grubstake project sponsors was inadequate.

"We have to assume interior light conditions would be half as much as what the project sponsors claimed in the study," Calderon said, asserting that six of nine hours of wintertime light would be blocked by the new construction.

"The proposed artificial mitigation is unregulated," Calderon said, adding that it couldn't be enforced.

Added Cincotta: "This should be sent back to the [planning department] for the review so the department can do a better shadow and impact analysis and to determine what measures would be appropriate."

Several callers repeated the claim that health problems would result from the project. A caller named Sergey, who lives at The Austin and did not give his last name, alleged it could cause bipolar disorder and schizophrenia.

Samantha, who also lives at the Austin and did not give her last name, also called in.

"There are severe light issues that need to be studied," Samantha said. "Another issue that needs to be studied is the cumulative traffic impact of the construction."

Samantha said that the sponsor's traffic study is inadequate because it was before the COVID-19 pandemic.

"As we all know, people are not using public transportation nearly as much any more," Samantha said, adding that there are fewer parking spaces available now, and people can no longer opt to take ride-shares with strangers. "Outdoor use of space, traffic, has changed significantly."

Planning, project sponsors, pushed back
For their part, the planning department officials followed the appellants' supporters by explaining the background context to the controversy. Rachel Schuett, an environmental planner with the department, pushed back against the appellants' claims, saying that there is no government standard for shadow that the department can use to judge the sponsors' light study as inadequate.

Schuett also said that the Grubstake is not an "individually eligible historic resource" in itself, and so therefore, "the demolition of this one resource did not have a significant impact on this [the Polk Gulch] historic district."

Therefore, Schuett said that the planning department "requests the board reject the appeal" and uphold the commission's July decision allowing the project to go forward.

Then, project sponsor Consos and land use attorney Alexis Pelosi got the chance to respond to the appeal.

Pelosi said that the appeal failed to meet what she conceded was a low legal standard.

"[To appeal successfully] requires substantial evidence," Pelosi said. "A light study was conducted by the appellants, who are not experts. ... It used techniques such as cardboard boxes, which have been found in academic papers to be unreliable."

Pelosi refuted the comparison to the Eagle.

"[The Eagle] has a long and singularly-focused history to the LGBTQ+ community," Pelosi said.

Consos then took a few minutes to discuss his "commitment for the Grubstake."

"It's always been my intent to have the Grubstake in the same location and with the same menu, just with a sustainable building and state-of-the-art cooking facilities," Consos said. "Sadly, despite our tireless efforts, [the appellants] have tried to do everything possible to stop this project. ... The project is strongly supported by the community and will ensure this treasure is maintained."

At that point in the meeting, people were free to call in support of the project and against the appeal.

Mike Chen, a board member of the Alice B. Toklas LGBTQ Democratic Club, called in to talk about the history of activism at the diner.

"It'd be great to get this project going to give the diner a new lease on life and to continue making history, connecting the past and the present," Chen said.

Sachet called in to say business owners' projects often "end up in the dust bin" due to "a handful of disgruntled neighbors."

"Every day in this city we read about another person caught in red tape," Sachet said. "In the case of this proposal, the owner has followed every legal and ethical guideline. Where is our commitment to reducing red tape."

Sachet invited the supervisors to come to the new Grubstake.

Virginia called in to say that he resented negative characterizations of his rallying of the queer community in favor of Consos' vision.

"I submitted copies of 220 letters and two petitions in support of the Grubstake project," Virginia said. "Sadly, the very few minority Austin condo owners who have deep pockets have characterized us as a sideshow because we are members of the LGBTQ community. We are not a circus. ... Grubstake is a safe haven and will be rebuilt as one."

Supervisors unanimously approved the project
The hearing moved to its conclusion with straight ally Peskin, who represents District 3 (where the Grubstake is located) breaking his silence on the issue. He said that the planning department is right on the issue of light and shadow, and that "the only colorable argument" is the fact that "tearing down part of the existing facility" may damage the historicity of the space as part of the Polk Gulch district.

"We should expect no deviation," he said, when Grubstake is rebuilt.

Peskin moved to go forward on the project, and was seconded by Mandelman — the only LGBTQ member of the board.

The project then passed unanimously.