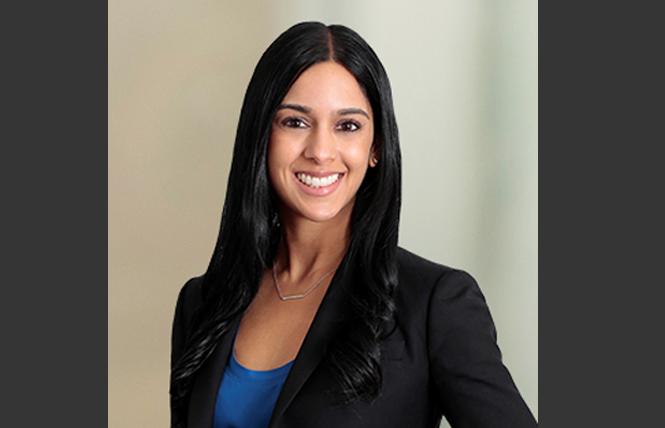 San Francisco's District 8, which includes the LGBTQ Castro, Noe Valley, and other neighborhoods, has a new liaison in the district attorney's office after the former one left.

Donahue left the DA's office to enter private practice, a spokesperson told the B.A.R. He did not respond to a request for comment.

Adhikari started at the DA's office in mid-August, after two years as an assistant district attorney in Contra Costa County.

Adhikari currently lives in Oakland. She said "it was a couple of things" that led her to the City by the Bay.

"Working for the San Francisco DA's office is my dream job," Adhikari said. "I ultimately wanted to end up here to come work for Chesa. I think the San Francisco District Attorney's office is on the map nationally. We are one of the most progressive DA offices in the country, and as ADAs we have a lot of discretion and that hasn't been used in the most progressive of ways in the past, so I wanted to do some good, and we especially aspire to that under Chesa, who is the model of the progressive prosecutor."

Boudin praised Adhikari in a statement to the B.A.R.

"Samantha brings a love for San Francisco and District 8 along with a wealth of prosecutorial and civil litigation experience to her new liaison assignment. She served in the Philippines through the Peace Corps and is a graduate of San Francisco's own Hastings College of the Law," Boudin stated, referring to the UC law school.

"She knows that San Francisco is a city of neighborhoods; each with its own unique challenges," Boudin continued. "Samantha looks forward to being the direct connection for District 8 to the district attorney's office and to working with Supervisor [Rafael] Mandelman, and all of our partners, to address the concerns that arise in District 8."

Adhikari told the B.A.R. that she was assigned to the role of District 8 liaison after Donahue's departure.

"I was asked," she said. "I had shown interest in being involved in that way.

"I love the Castro," she continued. "I come every Tuesday because I religiously go to Barry's [Bootcamp]. I've been to Lookout, Hot Cookie, so I've done all the Castro fun things, and I'm excited to know it a little better."

"I have met her and look forward to working with her," Mandelman told the B.A.R. "The Castro has real challenges related to property crime, vandalism, and burglary. Matt Donahue was very helpful to my office and to neighbors and merchants, and I am hopeful Samantha will be as well."

Nik Blanchet, a spokesman for the merchants, gave a statement on behalf of Samereie.

"I like what I see so far," he said. "Just like the TV show ["Law & Order"] — the police and the district attorney — we have two different roles but we had good communication and I have no reason to think that won't continue under Sam."

Adhikari said that she and Burke are trying to help people who have mental health crises and end up committing petty crimes on the street have access to resources to help them improve their lives.

"It's challenging, but it's a way to try to solve the problem from the bottom-up instead of from the top down," Adhikari said. "My biggest concern and focus for these people is that if people are in jail, or they have a stay-away order, they end up back on the street and there's no follow-up. We need to address their needs, primarily through treatment."