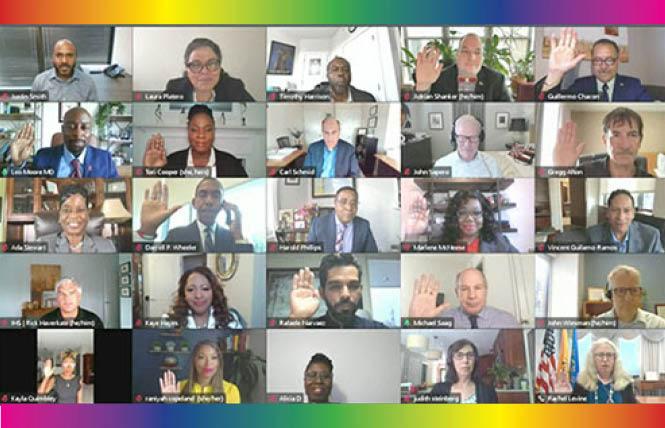 They were sworn in August 4 by Dr. Rachel Levine, the assistant secretary of health, who herself became the first openly transgender person to obtain Senate confirmation as a presidential appointee earlier this year, as the Bay Area Reporter reported at the time.

The new members of the council are Marlene McNeese, the assistant director of the Houston Health Department; Guillermo Chacón, the president of the New York-based Latino Commission on AIDS; Tori Cooper, MPH, the director of community engagement for the Washington, D.C.-based Human Rights Campaign's transgender justice initiative; and Raniyah Copeland, MPH, who was at the time the president and CEO of the Los Angeles-based Black AIDS Institute;

The council was first established in 1995 by then-President Bill Clinton. According to the U.S. Department of Health and Human Services, PACHA "provides advice, information, and recommendations to the Secretary of Health and Human Services regarding programs, policies, and research to promote effective prevention, treatment, and cure of HIV disease and AIDS. This includes recommendations to the Secretary regarding the development and implementation of the Ending the HIV Epidemic in the U.S. initiative and the HIV National Strategic Plan."

There can be up to 25 members of the council at any given time, who serve for terms of up to four years.

The council grew out of the President's Commission on the HIV Epidemic, which was established by then-President Ronald Reagan in 1987, and the subsequent National Commission on AIDS.

The former commission was most famous for its 1988 report that recommended the opposite of measures conservatives of the day were advocating for, such as mandatory testing. That report also recommended that a federal law be passed prohibiting discrimination on the basis of HIV-status, as the Washington Post reported at the time.

Upheaval in 2017
PACHA was thrown into upheaval in June 2017, when a half-dozen members resigned in protest of then-President Donald Trump.

The Trump administration subsequently fired the remaining members of the council before restaffing it in 2019 in the wake of Trump's stated aim to end the HIV/AIDS epidemic by 2030.

Three of the nine Trump appointees to the council were reinstated by the Biden administration. They are Gregg Alton, the chief patient officer for HIV drug-maker Gilead Sciences Inc., which is based in Foster City; Rafaelé Roberto Narváez, the co-founder and director of Florida-based Latinos Salud; and Michael Saag, professor of medicine and associate dean for global health at the University of Alabama School of Medicine, and director of the Center for AIDS Research at UAB Birmingham.

Together these, plus the eight Biden administration appointees, comprise the council.

Jesus Aguais, the board chair of the Latino Commission on AIDS, praised Chacón's selection in a news release.

"Guillermo Chacón's appointment to join PACHA is fantastic news," Aguais stated. "Guillermo will bring his passion, experience, longtime commitment and community perspective to address the challenges and opportunities to advance reaching our goals to end the HIV epidemic across the U.S. and its territories. A dedicated community leader and a force to address stigma and the health needs of our diverse communities."

Cooper is the first Black transgender woman to serve on the council. She told NPR that "my goal as an individual who's part of a collective is to make sure that we are bringing more equitable health outcomes and even the playing field to increase people's capacity to live healthily and happily."

Wheeler stated, similarly, that "Through my new position, I remain dedicated to promoting continued movement to end the AIDS epidemic and to promoting engagement of underrepresented minorities in HIV prevention sciences, care and treatment on an even larger scale."

Subsequent to Copeland's appointment, she was dismissed by the Black AIDS Institute as president and CEO. The organization currently has no president or CEO, and community members are wondering what exactly transpired. (Copeland is still on the council.)

Grazell Howard, the chair of the Black AIDS Institute's board of directors, stated in a letter August 20 that "Yesterday the board of directors voted to move forward with a leadership reorganization for the Black AIDS Institute which has been contemplated since January of this year. In doing so, we are announcing Raniyah Copeland no longer serves as our chief executive officer."

The B.A.R. reported last month that Toni Newman, a Black trans woman who previously was interim executive director of the Lavender Youth Recreation and Information Center in San Francisco, was tapped as interim CEO of the Black AIDS Institute. She is expected to start in November.

Moore tweeted that he is honored to get underway with the work of the council.

Honored to be a new member of the Presidential Advisory Council on HIV/AIDS (PACHA) and to serve alongside so many of my lifelong heroes and sheroes! Let's get to work. Onward #pacha pic.twitter.com/M6DgC0vezP— Leo Moore, MD, MSHPM (@Drleomoore) August 4, 2021

Quimbley shared a similar sentiment in a longer statement.

"I'm honored to join the Presidential Advisory Council on HIV/AIDS, another platform where I can ensure youth have access to medically accurate information about HIV, as well as work to repeal outdated laws that criminalize people living with HIV," Quimbley stated. "Through this work, and by centering young people living with HIV, it is my hope that we will continue to see reduction in HIV transmission, as young people gain more equitable access to quality healthcare and become more equipped with the knowledge and resources to prevent HIV and other STIs."

Shanker, who hails from Biden's birth state of Pennsylvania, thanked him and others for the appointment.

"I am deeply honored to be appointed by the Biden-Harris administration to serve as a member of the Presidential Advisory Council on HIV/AIDS," Shanker stated. "Health equity is an unmet dream at the center of the challenges faced by HIV/AIDS around our country and across the globe. I am grateful that President Biden, Health and Human Services Secretary Xavier Becerra and Assistant Secretary for Health Dr. Rachel Levine have prioritized health equity, and I am grateful for the opportunity to serve alongside the other PACHA members as we all work toward the end of the HIV epidemic."