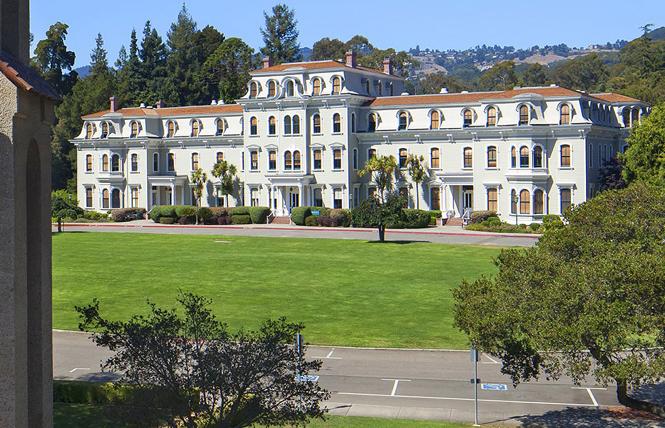 An Alameda County Superior Court judge has temporarily halted the planned merger of Mills College in Oakland with Northeastern University in Boston.

As the Bay Area Reporter previously reported, the proposed merger has turned into a legal fight in which supporters of East Bay school accuse its leaders of giving up. Mills is a private women's liberal arts college that also admits gender-nonconforming students in its undergraduate programs and all genders in its graduate programs.

Viji Nakka-Cammauf, Ph.D., who sits on the college's board by virtue of her position as president of the Alumnae Association of Mills College Board of Governors, filed a civil complaint in Alameda County Superior Court alleging that the trustees have not been given the information they need to make an informed decision about the future of the college.

Further, the plaintiffs sought "a temporary restraining order that prevents the college from taking any action toward the merger with Northeastern for 60 days," the complaint states.

According to a news release from the Mills alumnae group, in a ruling August 5, Judge Stephen Pulido agreed to the temporary restraining order, effectively stopping Mills College from entering into any partnerships, including with Northeastern University. Prior to the decision, a vote could have been held as early as August 12.

"I am thankful to the Alameda County Superior Court for its decision in this matter that hits the brakes and forces Mills College administrators to explain their lack of transparency to the Alumnae Trustees about the financial state of the College," stated Alexa Pagonas, a straight ally who is the vice president of the Alumnae Association of Mills College Board of Governors. "Mills College boasts a 169-year legacy of empowering creative, independent women who share an unwavering commitment to activism, anti-racism, and gender inclusivity that must be honored."

Pulido set a hearing for August 16 regarding the records issue.

Mills College President Elizabeth L. Hillman, a lesbian who was hired to lead the school in 2016, stated August 6 that "we look forward to the hearing."

"We will ask the court to recognize the responsibility and authority of the Board of Trustees to direct the college and allow the trustees to fulfill that responsibility without delay," Hillman stated. "As we said in our court filings: The plaintiff — just one of 23 trustees of the college — has received more than ample information necessary to support and inform her fiduciary duties to the college. The plaintiff, who is the president of the Alumnae Association of Mills College [Board of Governors] (AAMC), has instead chosen to serve the interests of the AAMC, not the college."

Hillman stated that not all alumnae are opposed to the merger, which was announced as a reversal of a plan announced earlier this year to close the school entirely due to financial difficulties. The merger will require men to be admitted as undergraduates, however. A similar proposal was considered and then rejected three decades ago after a two-week student strike.

"The trustees, most of whom are alumnae, are an experienced and sophisticated group," Hillman stated. "As a group, they are confident that they have more than sufficient information to fulfill their duties. They have and will continue to act in the best interest of the college and its constituents. This lawsuit to obtain records that the college already offered to make available to the plaintiff is an unfortunate side-show engineered by the AAMC and its lawyers. More broadly, it is deeply disappointing that the AAMC claims surprise and seeks to assign blame for financial challenges that the college, and smaller liberal arts institutions like it all across the nation, have been facing — and publicly addressing — for many years."

Renata Nyul, a spokeswoman for Northeastern University, issued a statement to the Boston Globe on August 6.