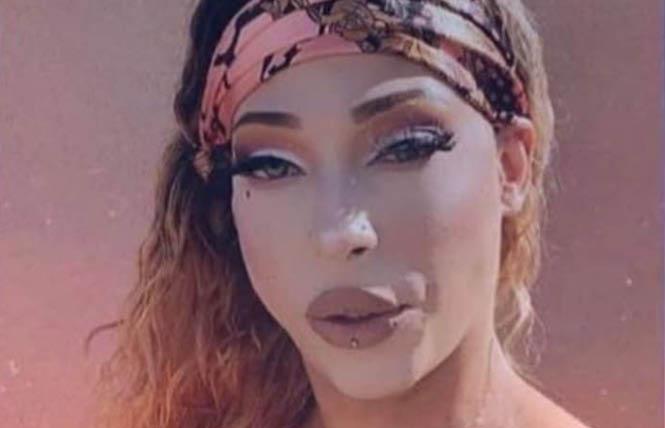 A Union City man was supposed to enter a plea June 15 on a charge that he murdered a transgender woman he'd been romantically involved with, but the plea was pushed back to July 28.

The reason is because Peter Johnson, the attorney representing Elijah Cruz Segura, 22, said he needed more time for discovery, according to Margaret Petros, the executive director of Mothers Against Murder, who is handling communications for the family of the victim, Natalia Smüt Lopez.

"[Segura's] attorney is still doing discovery, so he will not plead," Petros told the Bay Area Reporter. "There are documents needed by his attorney before he will plead. That's why the next hearing was scheduled for July."

As the B.A.R. previously reported, prosecutors allege that Segura stabbed Lopez, 24, of San Jose, to death early April 23. The two had been dating for several months, according to a statement of facts from a detective. Segura was formally charged at San Jose's Hall of Justice April 29. He remains in custody.

Lopez's death sent shockwaves through the South Bay LGBTQ community, which mourned the drag performer as it unveiled a mural featuring Lopez's likeness in downtown San Jose April 30, as the B.A.R. reported (https://www.ebar.com/news/latest_news//304499).

On that occasion, Vanessa Singh, Lopez's sister, briefly spoke to thank the South Bay LGBTQ community for its support.

Singh spoke with the B.A.R. after the June 15 court hearing in Department 34 of the Hall of Justice when it was learned a plea would not be entered that day.

"It's frustrating, to be honest," Singh said. "But that's just the way the justice system works; the process is very long."

Singh said she plans to attend every court date.

"Going on two months, we're taking it as best we can," Singh said about the grieving process. "I just want to see justice for my sister. I'm going to keep the hope alive for the voice she no longer has."

Johnson and Deputy District Attorney Rebekah Wise did not immediately respond to requests for comment.

Union City man to be arraigned in killing of trans woman
Sign up!