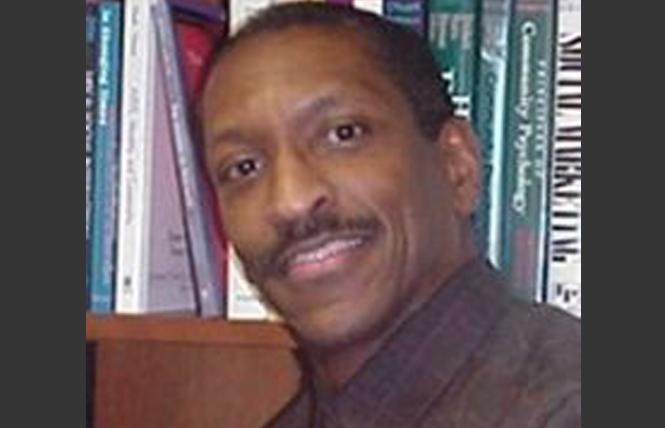 Professor Emeritus John Lamont Peterson, Ph.D., died unexpectedly of natural causes May 23 in Atlanta. He was 72.

Mr. Peterson, a gay man, had served on the faculty of Georgia State University's Department of Psychology until his retirement in 2015.

According to an obituary prepared by Roger Bakeman for GSU, Mr. Peterson graduated with honors from Jones High School in Orlando and attended summer studies at Harvard University. He graduated from Florida A&M University in 1970 and earned his Ph.D. from the University of Michigan, Ann Arbor, in 1974. His mentor was James Jackson, one of the most eminent African American psychologists of the last half-century, known for his studies on the impact of racial disparities on minority health and for his many professional contributions.

Mr. Peterson enjoyed a long and distinguished academic career and was known for his many contributions to understanding the predictors of HIV/AIDS risk reduction, the effects of behavioral interventions to reduce this risk behavior, and the social determinants of racial disparities in HIV infection, primarily among Black men who have sex with men, Bakeman's obituary stated.

Larry Saxxon, a gay Black San Francisco resident who was friends with Mr. Peterson for 40 years, told the Bay Area Reporter that his mentor was an original founder of the Third World AIDS Advisory Task Force and one of the most influential African American gay researchers in the world with respect to the HIV/AIDS pandemic and its impact on the African American gay male community.

"His work is among the most well cited research in the entire world with respect to challenges that both societal and political challenges posed while fighting this horrific pandemic," Saxxon wrote in an email. "He unabashedly dealt with both homophobia within the African American communities and racism within the LGBTQ communities and showed direct correlations on how the presence of these social ills negatively impacted our ability to combat the AIDS pandemic."

Saxxon stated that Mr. Peterson began his career as an AIDS researcher and member of the education department of the then-AIDS Project of the East Bay when it was still a division of the Pacific Center for Human Growth in Berkeley.

"Dr. Peterson actively participated with several other AIDS education and prevention expert panels and advisory capacities with the San Francisco AIDS Foundation, San Francisco General Hospital, the AIDS Health Project, and the Center for AIDS Prevention Studies program at UCSF, Georgia State University, the National Institutes of Health, and a host of innumerable other professional agencies and entities," Saxxon added.

"He has mentored and trained numerous other professionals in the field of research because in essence, John passionately believed with research, and its findings, one could not only change the course of educating the public about the dynamics of this horrific disease, but also with firm belief that enlightened scientific revelations could move policy and political change for both the LGBTQ and African American communities nationally, and indeed internationally," Saxxon added.

Mr. Peterson was a fellow of the American Psychological Association and of the Society for Community Research and Action; included in Florida A&M University's Gallery of Distinction; a Horace H. Rackham Prize Fellow at the University of Michigan; and he served as a member of the National Academies of Science-Institute of Medicine's Committee on LGBT Health Research, according to the obituary.

After teaching at Claremont's McKenna College and Graduate School in the late 1970s and early 1980s, and realizing in particular the growing impact of the early AIDS epidemic on African American men, Mr. Peterson joined the CAPS at UCSF, where he served as a research scientist from 1986 to 1993. In 1994 he joined the GSU's Department of Psychology's Community Program, first as an associate professor, then as a full professor from 2003 until his retirement, the obituary stated.

He leaves a record of over 70 publications, nearly 20 books and book chapters, and over 100 conference presentations, many with students he mentored. According to the obituary, he collaborated widely, not just with his colleagues at CAPS, but also with colleagues at the Rollins School of Public Health at Emory University, and on projects with the NIH and the Centers for Disease Control and Prevention. He was known for his active mentoring of Black social and behavioral scientists and was among the most respected researchers on the Black HIV experience, influencing protocols on how to pursue outreach and reduce infection among African American men.

Dr. David Malebranche, an associate professor at Morehouse College in Atlanta, told the B.A.R. that he and many other gay Black men doing HIV research owe Mr. Peterson a debt of gratitude.

"As a younger Black gay physician in the late 1990s, I was interested in doing research and sexual health work with Black gay men," Malebranche stated in an email. "The name I saw on many of the publications back then focusing on Black gay men was John Lamont Peterson. He did work that was unapologetically focused on Black gay men, and he was talking about and developing the HIV prevention interventions for Black gay men long before it was chic or received broad federal or private funding. He understood the equal importance of both Black and gay identities for men, and how social contexts and mental health played a pivotal role in our lives and sexual health."

According to the obituary, Mr. Peterson leaves behind a wide circle of friends in the academic research community nationally; many friends in the HIV/AIDS and gay activist community in Atlanta; and friends in Black and White Men Together, especially the Los Angeles, San Francisco, and Atlanta chapters. The National Association of BWMT had planned to present Mr. Peterson with its Lifetime Achievement Award at its 40th convention in New Orleans in July; it will now do so posthumously.

Born April 22, 1949, in Orlando, Florida, he was the only child of John Sheppard Peterson and Maggie Peterson, now deceased. His domestic partner, Lupin Loughborough, died in 1993. He is survived by his cousins Tracy Anderson and Julia Diggle and other relatives in Florida, Georgia, Michigan, California, Pennsylvanian, New York, and New Jersey.