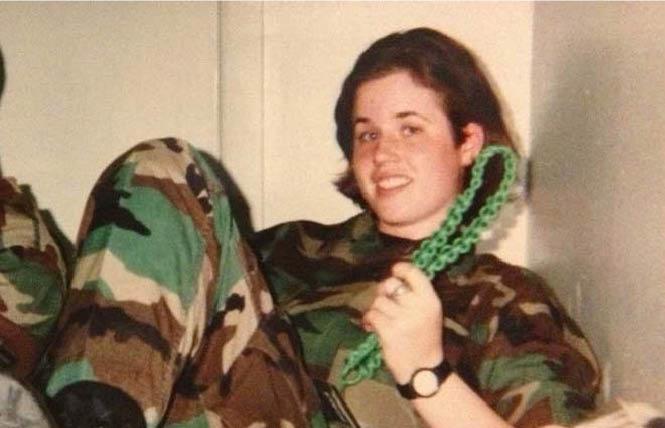 Lauren Hough grew up in the infamous, apocalyptic Christian free-love and -sex cult The Family, formerly The Children of God. Her pacifist father had joined the cult in 1970 or so to dodge the Vietnam War. At 18, partly to spite her dad, Hough enlisted in the U.S. Air Force, where she got death threats and her car was set ablaze because she's lesbian.

The Air Force court-martialed Hough, accusing her of setting her own car on fire. The military's "Don't Ask, Don't Tell" policy, in place from 1994 to 2011, kept her from citing the homophobic death threats in her defense. Her new book of essays, "Leaving Isn't the Hardest Thing," details this and other horrors with scathing critiques on U.S. society, lightened occasionally by her sardonic wit.

Hough spent much of her childhood moving around the world at the cult's direction and navigating the its ever-changing rules and expectations. "I broke practically every rule," said Hough. Punishment for an angry outburst was to be silent for a full month; another time, when they decided she wore pants too much, she had to wear skirts for a month, even while playing.

Some of her essays address society's "vile" treatment of poor people. Restaurants, she writes, pour bleach on garbage bags to discourage the hungry from rummaging through them for food. Cities ban homeless people from camping.

"What are you supposed to do in this country if you don't have a home?" Hough asks. "It's in our anti-homeless architecture, park benches with spikes so you can't sit or lie on them. There's an entire industry behind making sure we don't see homeless people. ... It just makes it more difficult for them."
Last month in D.C., Hough was in a bookstore she frequented nearly 20 years ago to use the bathroom. "They had a pile of my books, and I signed them in the store where I used to kind of take a shower when I lived in my car," she said with a laugh. "It was a profound experience. I had to go over to DuPont Circle and just sit there for a while watching those old guys play chess."

Hear more from essayist Hough on this week's Out in the Bay - Queer Radio from San Francisco. The program re-airs 9:30 a.m. Saturday, June 12, on KSFP, 102.5 FM in SF only, and is available anytime, anywhere on Out in the Bay's website. Out in the Bay also airs at 10 p.m. Tuesdays on KALW, 91.7 FM throughout the Bay Area.

Out in the Bay: Publisher, news editor reflect on B.A.R.'s first 50 years
Sign up!