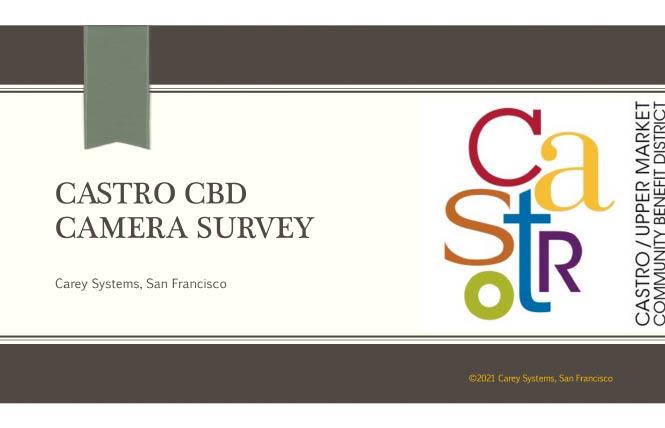 The Castro/Upper Market Community Benefit District presented results of its camera survey June 7, before the board voted to kill the proposal. Photo: Screengrab

A proposal to place more than 125 security cameras in San Francisco's Castro neighborhood died June 7 in the face of significant community opposition.

In a unanimous voice vote, the Castro/Upper Market Community Benefit District Board of Directors decided not to continue discussion of the proposal. The vote came just after the results of a survey were announced at the meeting purporting to show majority support for cameras, but the poll was criticized by some for its leading questions.

"We don't have any commitment for long-term costs, so that's one reason I'd say kill the program here tonight," said CBD Treasurer Crispin Hollings, a gay man and longtime community leader. "Another thing is ... we are an unelected body that would be imposing a system on this neighborhood outside what the CBD ought to be doing. There's a lot of good work that the CBD can do without being distracted by this."

Discussion of a security camera network started last year amid concerns about petty crime in the Castro neighborhood. As the Bay Area Reporter reported last October, tech mogul Chris Larsen is paying to install cameras via CBDs throughout the city. They have already been installed in the Fisherman's Wharf, Lower Polk, Mid-Market, Tenderloin, Union Square, and Japantown neighborhoods.

Randall Scott, the executive director of the Fisherman's Wharf Community Benefit District, said during a contentious town hall on the Castro CBD's camera proposal in April that there are 40 cameras in his district.

The Castro CBD was going to vote last year on accepting $695,000 from Larsen for the program, until the Harvey Milk LGBTQ Democratic Club sent a letter to the CBD just hours before the latter's board meeting asking that the camera item be rejected or, at the very least, the vote be postponed.

The Milk club letter referenced the lawsuit (lead plaintiff Hope Williams sits on the Milk club board, the letter noted) and the historic use of surveillance cameras to target the LGBTQ community.

After that, a survey was sent asking people their thoughts on the proposal and a town hall was scheduled for April. The Castro LGBTQ Cultural District and the Alice B. Toklas LGBTQ Democratic Club joined the Milk club in expressing their discomfort with the plan.

But a bevy of participants at the town hall felt the meeting was one-sided, after the only group opposed to the cameras — the cultural district — pulled out of giving a presentation because the Milk club was not invited.

As the B.A.R. reported late last month, mum was the word about the proposal from the time of the town hall, until the announcement last week of the CBD board meeting.

Survey reveals community divided on cameras
Most of the June 7 CBD meeting was taken up by discussion of the survey, which garnered 938 submitted responses, of which 774 were counted.

Greg Carey, a gay man who presented the results of the survey in his capacity as a consultant for Carey Systems (B.A.R. readers may know Carey from his role as chief of the volunteer Castro Community on Patrol), said that incomplete surveys and surveys from duplicate or fictitious emails were not included in the final count.

Andrea Aiello, a lesbian who is the CBD's executive director, assured viewers of the virtual meeting that the survey represented a broad cross-section of people who live, work, and otherwise have a stake in the Castro.

"A lot of organizations, such as the cultural district, shared our post [of the survey]," Aiello said. "Lots of organizations sent it to their membership lists, and so it was spread around to a lot of people."

When given the chance to respond to the prompt "my opinion about the proposal to install safety cameras with a well-managed camera program with now direct access to the police or the public is:," 54.8% responded "support this technology."

An additional 6.8% of the total respondents reported that they "may support other technology." A combined 28.8% responded with anti-camera proposal answers.

Carey said that it was decided the survey would use the term "safety cameras" over "security cameras."

"The term 'security camera' infers the ability or plan to monitor in real time," Carey said. "This does not describe the proposal we are discussing here tonight. It just doesn't apply."

Aiello lauded the sheer amount of detail in the survey results — which also include aggregate data about the connection of respondents to the CBD footprint and their experiences of crime — as "incredible."

But not everyone was sanguine about the survey, which elicited criticism before Carey finished presenting its results.

In the comments section of the Zoom meeting, Jason Wyman wrote "this is a terribly crafted survey."

"The methodology behind the survey is totally flawed and provides no opportunity to engage with concerns," Lee Hepner, a gay man who sits on the Milk club's board, told the B.A.R. during the meeting. "'Cameras may keep you safe. Do you support cameras?' is not a real survey."

Speaking during public comment, Hepner, who also serves as a legislative aide to District 3 Supervisor Aaron Peskin, likened the survey to a "push poll."

"There's nothing in that survey that is not a push poll to convince people cameras will make us safe," Hepner chided, critiquing "the conflation of cameras with safety."

Tracy Rosenberg of United to Save the Mission also criticized the survey.

"I'm concerned that you threw away or discarded 164 of the surveys. That's almost one-in-five," Rosenberg said. "The fictitious email responses to the survey should not have been thrown out."

Speaking to the B.A.R. June 8, Carey said that providing the context for the questions was necessary to run an informed survey, and that the methodology was based on best practices.

"The criticism came early, but my whole role has not been to take any sides, but just to provide data," Carey said. "My background in survey development suggests the best way to understand is to have questions that explain the context, and that the context and background — beyond a yes and no question — can help inform what to do."

'Little to no deterrent effect'
During public comment, the breadth of opposition to the cameras became evident.

Brian Hofer, who drafted the city's ban on facial recognition technology, said that while "it's unfortunate private parties have to try to solve problems that our government has failed to solve," the cameras would likely have "little to no deterrent effect" to petty crimes.

Hofer cited reporting from the San Francisco Chronicle that some 17 city Walgreens have closed in the last five years due to robberies.

"Each of those facilities had cameras and many had security guards but the failure speaks for itself," Hofer said.

Masood Samereie, a straight ally who is the president of the Castro Merchants Association, said that the association's members opposed the camera system as proposed.

"We believe it should be decentralized," Samereie said. "I have made the request to meet with the donor to discuss our proposal."

The absence of that donor, already a controversy during the April town hall, was brought up again.

"It's very strange that Chris Larsen is giving two-thirds of a million to an organization but is not presenting himself to us," said gay CBD board member Daniel Bergerac, stating his intention to vote against continuing discussion of the camera proposal.

Larsen stated in an email June 8 that he's from San Francisco and believes in the city.
"In many ways, tech has contributed to the disparity and problems that we see in San Francisco today," Larsen stated. "As members of the community, I think it's our job to help solve them by reinvesting in the city, making it safe and supporting our small businesses. We work closely with people in the community who know how to best support residents and businesses in each neighborhood. Any project — including the funding of cameras — is driven and maintained by the community."

Samereie wrote to the B.A.R. June 8 that "we have reached out to other community organizations and [are] trying to collaborate in this effort and make it a win-win for everyone in a sensible way."

Justine Shoemaker, president of the CBD's board of directors, said in explaining her intention to vote against the proposal that while "there were a fair amount of people really in favor of a camera program," she "would have expected to see 70-80% support for the program."

When it was clear that the CBD board was going to end further consideration, Hepner extended an olive branch.

"The CBD can rebuild trust and bridges with these community organizations [that opposed the cameras]," Hepner said. "It's a genuine offer that we'd like to continue collaborating on community-based alternatives. That offer to collaborate is absolutely genuine."

"Collaboratively is the way to move forward," Torres said.

After the meeting, Torres wrote to the B.A.R. that Hepner's comments were "so important."

"When we were elected to this [cultural district] board, each of us promised to listen to our community, which is why we took this position against this surveillance system, but like Lee said so eloquently, we also recognize the importance of working with leadership in the Castro collaboratively and seeking solutions that serve our community best," Torres wrote early June 8.

"The CBD leadership, as well as that of groups like the Castro Merchants, have put in a lot of years trying to work on behalf of the community and we, like the Harvey Milk, Alice B. Toklas Dems and other members of our coalition, are here to help in whatever way we can in creating a safe and inclusive Castro."

Catie Arbona, a queer woman who is the co-chair of the Alice club, stated in a June 8 email to the B.A.R. that the organization is "glad to see the CBD decline to move forward with the proposal last night, and we're equally glad that the CBD was willing to listen when Milk, Alice, the cultural district and other community members expressed our concerns."

"Attempting to meet the needs of a neighborhood as diverse as the Castro — including visitors, business owners, and housed and unhoused residents — isn't a simple or easy job, and we very much join in Milk and the cultural district's offer to collaborate with the CBD on future community-based alternatives to the camera proposal," Arbona continued.

In an emailed response, Aiello told the B.A.R. that the CBD board was guided by the survey results.

"The Castro Community Benefit District Board had decided several months ago that they would look toward the community, particularly the community-based survey, to help the board make a decision," Aiello stated. "The results of the survey were presented to the board last night, the results showed a majority of respondents supporting a camera program with strong privacy controls, but not an overwhelming majority. The survey results showed approvals in the 44-60% range. To approve a controversial project such as this, the board was looking for approvals in more of the 75-80% range."

Updated, 6/8/21: This article has been updated to include comments from Chris Larsen, the Alice club, and the CBD.