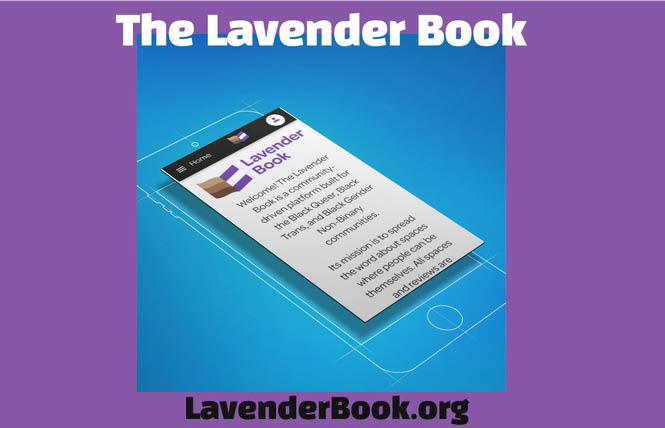 A new web-based app will make it easier for Black LGBTQ people to find safer spaces.

The concept of Lavender Book, launched May 17, is based on that of the Green Book that was published during the Jim Crow-era to show people where to find businesses on American roads that were accommodating to Black Americans.

"Lavender Book definitely builds on the Green Book — a resource used at its height when the terrorization of Black folks was celebrated and tolerated," David Johns, a same-gender loving man who is the executive director of the National Black Justice Coalition, told the Bay Area Reporter. "The work of the NBJC exposes us to the reality that many of the challenges then exist now in ways that are invisible to most folks."

Lavender Book was created through a partnership between NBJC and the LGBTQ nonprofit Out in Tech.

"We believe every person deserves to be treated with respect and dignity. However, there are still states where people can be denied services on the basis of perceived sexual orientation and gender identity," Andrew Lowenthal, the executive director of Out in Tech, stated. "Unfortunately, there are also unfriendly, unwelcoming, and even hostile environments specifically for BIPOC members of our community."

Lowenthal stated that through tech, people can start to find better places where they can be themselves.

"By leveraging the power of technology and crowdsourcing for social change, we hope to help BIPOC LGBTQ+ folks find safe and inclusive spaces at the recommendation of their peers," Lowenthal continued.

App has 2 goals
Johns said that "the app is designed to support two tasks."

"One is the need to reduce the amount of labor many in our community extend trying to find places useful to them," Johns said. "The second is to celebrate businesses and public spaces doing the work already."

The app is not designed per se to connect Black LGBTQ-friendly spaces, Johns said, "though it can definitely support that."

The crowdsourced nature of the app means that individual users can add a space. Those looking for one can pick a variety of fields to narrow their search. These fields include "Black-Friendly," "Black-Owned," "Gender-Neutral Restroom," "Trans-Owned," and "Trans-Trained."

But there are also rules and guidelines to prevent people from abusing the service: listings have to be relevant, conflicts of interest and promotional content are banned, and people's private information is not to be publicized.

"Members of our community come to the Lavender Book to find businesses, nonprofits, places of worship, and spaces to simply be, that are owned and operated by folx who demonstrate consistency in competence and compassion in their approach to providing inclusive, safe, and affirming experiences for Black LGBTQ+/SGL people," the community guidelines state. "We know that people will not always agree, but we expect everyone in the user community to treat one another and the platform with honesty and respect."

Johns said that the job now is to get the word out.

"We're leveraging the digital platforms of NBJC, as well as our tech partners," Johns said. "There's some spectacular partner engagement with folks we work with, who work with queer, trans, and Black community leaders.

"I'm really proud it exists," Johns continued. "We're grateful for our partnership with Out in Tech and we look forward to the day when the need for safe spaces — designated as such — is not necessary."