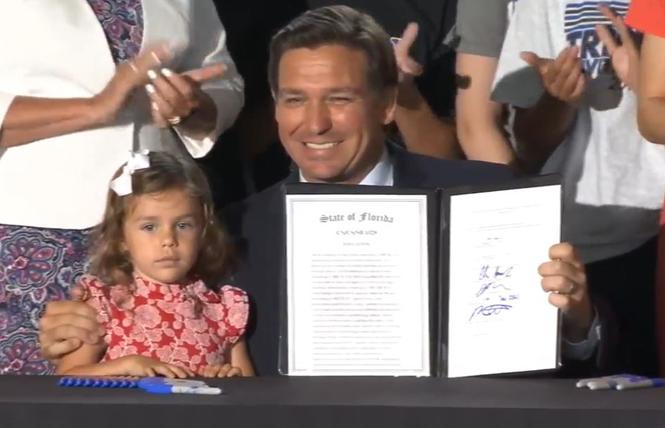 After Florida Governor Ron DeSantis kicked off Pride Month by signing an anti-transgender bill into law, the Sunshine State becomes the fifth state this year expected to be added to California's banned taxpayer-funded travel list for state employees and college athletic teams. It will bring to 17 the number of states on the "no fly" list.

During a June 1 signing ceremony, DeSantis, a Republican, signed into law legislation requiring transgender youth play on sports teams based on their sex assigned at birth. Florida is now the eighth state to enact such legislation that primarily is targeted at transgender female athletes in middle school up through college.

"The Fairness in Women's Sports Act will empower Florida women & girls to be able to compete on a level playing field," wrote DeSantis in a tweet. "This will help ensure that opportunities for things like college scholarships will be protected for female athletes for years to come."

Immediately afterward the Human Rights Campaign announced it would sue Florida over the law. The national LGBTQ rights organization lashed out at lawmakers across the country for enacting such bills without providing any evidence that they are needed.

"The Human Rights Campaign will always stand up to anti-equality forces on behalf of transgender kids, and that is exactly what we plan to do by legally challenging this ban on the participation of transgender girls and women in sports," stated HRC President Alphonso David. "Governor DeSantis and Florida lawmakers are legislating based on a false, discriminatory premise that puts the safety and well-being of transgender children on the line."

In April, West Virginia Governor Jim Justice (R) signed into law a similar bill that bans transgender girls and women from participating in sports at the elementary, secondary, or post-secondary level consistent with their gender identity. The Mountain State should now also be added to the Golden State's "no fly" list.

The onslaught of attacks against transgender athletes, mostly directed at girls and women, led the NCAA to reiterate its support for trans athletes earlier this month and its commitment to only hold championship sports games in locations where the hosts can provide safe and healthy environments free of discrimination. Yet, as the Associated Press reported in May, the NCAA has chosen schools in Alabama, Arkansas, and Tennessee as championship host sites for upcoming regional softball tournaments even though all three states have passed bills banning the participation of transgender women and girls in sports consistent with their gender identity.

It prompted criticism from various groups, including HRC, who called on the NCAA to adhere to its stated policy. The other states that have adopted trans youth sports ban laws are Mississippi, Montana, and Idaho, while South Dakota Governor Kristi Noem (R) signed two executive orders having a similar effect.

When governors of other states enact anti-LGBTQ laws, the office of California Attorney General Rob Bonta reviews them to see if it triggers placing those states on the no-fly list. In addition to Florida and West Virginia, Bonta is expected to also add Arkansas, Montana, and North Dakota to the travel ban list.

Montana Governor Greg Gianforte (R) signed into law April 22 Senate Bill 215, which LGBTQ advocates contend is an expansive religious refusal bill that could grant a license to discriminate against Montanans and visitors, including LGBTQ people, people of faith, and women, across a wide range of goods and services in the state.

In response to the Bay Area Reporter's emailed question on when Bonta would add the quintet of states to the no fly list, his office didn't indicate a timeline and referred to the webpage where it maintains the updated list of banned states.

"While we can't speak to any potential legal strategy, the California Department of Justice will continue to implement AB1887 and push back against LGBTQ+ discrimination," stated his office.