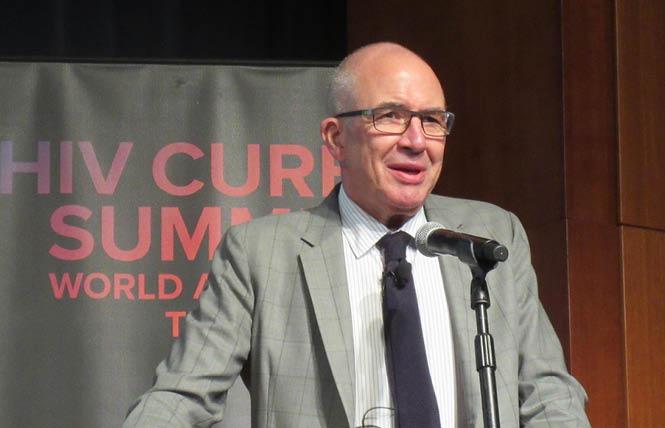 Dr. Paul Volberding was one of the first physicians to treat AIDS patients in San Francisco. Photo: Liz Highleyman

On June 5, 1981, the Centers for Disease Control and Prevention's Morbidity and Mortality Weekly Report published the first report on AIDS. Over the following four decades, San Francisco has been at the forefront in responding to the HIV pandemic.

"The message is especially important now, given what we're going through with COVID," Dr. Paul Volberding, one of the first doctors to treat people with HIV and now director of the UCSF AIDS Research Institute, told the Bay Area Reporter. "The two pandemics are obviously very different in many ways, but it's encouraging to see that San Francisco has responded so well to both of them, in many ways leading the world."

That report 40 years ago concerned five cases of unusual Pneumocystis pneumonia (PCP) among young gay men in Los Angeles. The first mention of "gay men's pneumonia" in the Bay Area Reporter appeared in the July 2, 1981 issue. A second MMWR report published on July 3 described 10 more cases of PCP among gay men in Los Angeles and San Francisco, as well as 26 cases of Kaposi sarcoma, a rare cancer. A follow-up report in August included more than 100 cases.

"Ward 86 opened its doors in January 1983 recognizing that a designated outpatient clinic to treat patients with HIV with compassion and designated care was important," current Ward 86 medical director Dr. Monica Gandhi told the B.A.R. "Ward 86 has since had many innovations, including the RAPID program providing same-day HIV therapy after diagnosis, a PrEP clinic, the Golden Compass program for HIV and aging, and the POP-UP clinic providing HIV care for marginally housed people."

In May 1982, Volberding, Conant, the late B.A.R. publisher Bob Ross, activist Cleve Jones, and others started the Kaposi's Sarcoma Research and Education Foundation, which later became the San Francisco AIDS Foundation. It was the second such organization in the United States, after Gay Men's Health Crisis in New York City, founded by the late author and playwright Larry Kramer and others that January.

Ward 86 and Ward 5B, SFAF, Project Inform (started by the late Martin Delaney and Joseph Brewer in 1985), and Shanti (created in 1974 to care for people with other life-threatening illnesses) were among the components of the San Francisco Model of HIV care. The model involved multidisciplinary medical care in collaboration with community organizations that provided complementary services ranging from food delivery to buddy programs to hospice care.

"I don't think we ever had a great strategic plan — it was really quite organic," Volberding recalled. "We had a great university, we had a great health department, we obviously had a very organized and politically powerful gay community, and local political leadership was really quite advanced. We in the medical community benefited from the information networks that were out there in the gay community. We knew that we couldn't deliver the at-home services our patients needed, but organizations in the community could. We had our different roles, and we respected each other in those roles."

Prevention, activism, and treatment
From the earliest days, San Francisco was a leader in HIV prevention. In 1982, the Sisters of Perpetual Indulgence produced the Play Fair safer sex brochure, featuring what might be the first published advice that gay men use condoms. The Stop AIDS Project, started in 1985, came under fire from congressional Republicans for its sexually explicit educational materials and workshops. Taking another prevention tack, San Francisco's Prevention Point, started in 1988, was one of the first needle exchange programs in the United States.

In December 2010, UCSF researcher Dr. Robert Grant and colleagues published results from a study showing that daily Truvada (tenofovir disoproxil fumarate/emtricitabine) reduced the risk of HIV infection by more than 90%. Gay and bisexual men in San Francisco were among the earliest and most enthusiastic adopters of PrEP, which was approved by the federal Food and Drug Administration in 2012.

In the same way as the Stonewall riots in New York City are commonly regarded as the first militant LGBT activism, even though the Compton's Cafeteria riot took place in the Tenderloin three years prior, San Francisco saw some of the earliest AIDS activism before the founding of ACT UP/New York in March 1987.

The AIDS/ARC vigil outside the federal building at United Nations Plaza — perhaps the first act of civil disobedience related to HIV — started in October 1985 and went on for 10 years. That November, people with AIDS and their supporters organized a candlelight march from the Castro to the vigil site. Marchers taped hundreds of placards bearing the names of people who had died to the walls. Jones would later recall that this gave him the idea for the Names Project AIDS Memorial Quilt.

A San Francisco group called Citizens for Medical Justice carried out some of the earliest AIDS protests. The group changed its name to AIDS Action Pledge and later to ACT UP/San Francisco. ACT UP spearheaded a week of actions around the Sixth International AIDS Conference at Moscone Center in 1990, focusing on issues including the U.S. ban on travel and immigration by HIV-positive people and the crumbling of the San Francisco Model due to inadequate funding.

San Francisco also played a key role in the development of HIV treatment. Prior to the FDA approval of the first antiretroviral drug, AZT, in 1987, Project Inform educated the community about experimental therapies and helped people obtain them through buyer's clubs. Researchers and clinicians at UCSF, SFGH, and Kaiser Permanente conducted clinical trials that would lead to more effective medications.

The first protease inhibitor, saquinavir, was approved in December 1995. This finally enabled people to put together drug cocktails that could keep HIV in check. Within a year after the debut of combination therapy, AIDS mortality had dropped dramatically in San Francisco and nationwide. On August 13, 1998, the B.A.R. ran its famous "No obits" cover, reporting that for the first time since the epidemic started, no obituaries were submitted for that week's paper.

The new antiretrovirals came with unexpected side effects, leading some advocates and clinicians to favor later treatment and medication breaks. But two major studies, SMART and START, showed that delaying or stopping treatment is risky. In 2010, San Francisco was the first city to recommend that everyone should start treatment as soon as they are diagnosed with HIV. Federal treatment guidelines followed suit in 2012, as did the World Health Organization in 2015.

The advent of highly effective biomedical prevention and treatment raised the hope of eliminating new HIV infections and AIDS deaths. With this goal in mind, San Francisco launched its Getting to Zero initiative in 2014. According to the latest SF DPH HIV Epidemiology Report, there were 166 new HIV diagnoses and just over 15,900 people living with HIV in 2019, 69% of whom were age 50 or older. (See related story.)

Challenges remain
Despite the advances over the past 40 years, challenges remain. Black and Latino people are less likely to use PrEP and have a higher rate of HIV infection, but are less likely to start treatment promptly and achieve an undetectable viral load. People experiencing homelessness have the lowest rate of viral suppression, at just 39%. And after decades of research, there is still no vaccine for HIV and a cure remains elusive.

"I would love to have seen a vaccine for HIV the way we have now for COVID. On the other hand, I'd also love a treatment for COVID that was as effective as the ones we have for HIV," Volberding said. "Just think how far we've come with HIV treatment — the fact that we have one pill once a day or even one injection once every month. Our [HIV] drugs are now available even in the most resource-limited settings around the world. Now we need to do that for the COVID vaccines."

Some World AIDS Day events returning to in-person this year
Sign up!