A day late, but San Francisco's Market Street is again decked out in Pride flags 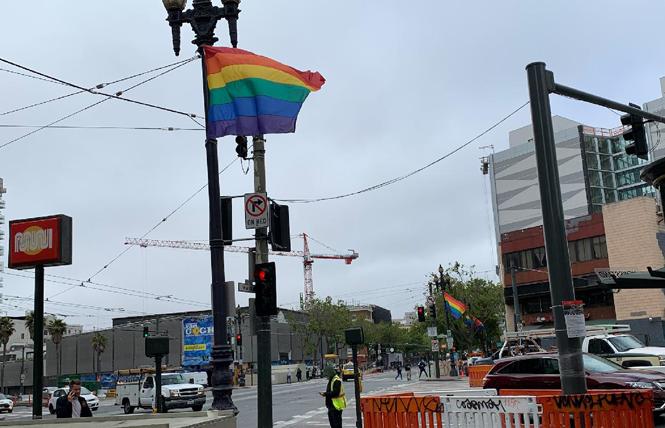 The annual raising of the Pride flags on the light posts of Market Street started late this year.

"They're being installed right now actually," Fred Lopez, a gay man who is the executive director of the San Francisco LGBT Pride Celebration Committee, told the B.A.R. mid-morning June 2. "The team is out on Market Street as we speak."

In fact, the flags were seen along Market at Van Ness Avenue shortly after the call with Lopez.

This isn't the first time the flags have gone up late. As the Bay Area Reporter previously reported, the flags were late in 2009 due to mechanical problems with the boom truck used to install them, according to Lindsey Jones, then the executive director of the committee.

When asked why the flags were not up earlier, Lopez said "I don't have an answer for that."

Lopez said that the team that raises the flags is "going to do all they can today," but may not be able to hoist all the flags today due to "traffic and some other things."

When asked about the team responsible for raising the flags, Lopez said that SF Pride has "contracted with them for many, many years now," and knows at least one of the people involved by name, but doesn't know if the team has a proper name.

"I'd have to ask my production team," Lopez said.

After the initial publication of this story, Pride communications manager Peter-Astrid Kane stated that "A longtime contractor usually hoists them with the help of his nephew, but he's doing it solo this year so it might take an extra day or two to complete the job."

According to a 2012 B.A.R. report, there was a stash of 500 flags for use at that time. Lopez said June 2 that the committee is planning on raising 320 flags this year.

That earlier report states that SF Pride had to replace the flags at a cost of $40,000 that year due to the extensive wind damage they had sustained on the city's main thoroughfare.

The Rainbow Colors Committee had coordinated the effort until 2007, after which the Pride Committee took it over, according to Kane. The raising of the flags along Market Street was the brainchild of Clyde Wildes in 1983, according to a 1997 Chronicle story. (Though Kane stated it started on an annual basis in 1984.)

Lopez said that the flags have to be customized to fly from the light posts. They are annually affixed to the streetscape infrastructure along Market Street from the Embarcadero up to just past Castro Street in the city's LGBTQ neighborhood and remain up through the end of June.

"While there has been remarkable progress towards acceptance and equality in recent years, members of the LGBTQ community in the United States and around the world still face an unacceptable level of discrimination and violence. This includes LGBTQ people who aren't safe at home and those who do not have a home in which to stay," read the proclamation. "We must push back against those who threaten the safety of LGBTQ Californians and challenge our progress. And we must continue to make the case that all human beings share something fundamental in common — all of us want to love and be loved."

Newsom also remarked upon the second year that Pride celebrations have been upended by the COVID pandemic. Like last year San Francisco Pride officials have again canceled the civic celebration and parade traditionally held the last weekend of June.

"Last Pride month, in the throes of a once-in-a-generation pandemic, we celebrated virtually. Now, as we move 'beyond the blueprint' this month, we look forward to the opportunity for the community and its allies to gather together in celebration once again," stated Newsom's proclamation.

UPDATED 6/2/2021 with the California Pride proclamation. 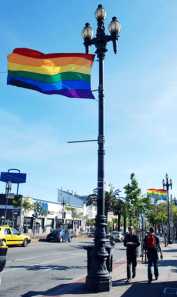 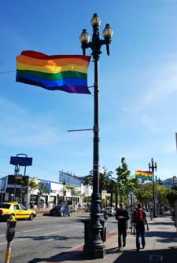