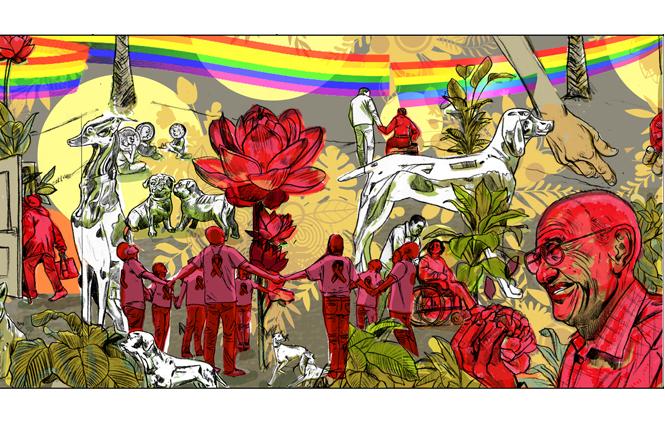 As the city and the LGBTQ community commemorate four decades since the first reported cases of what became known as HIV/AIDS, Maitri Compassionate Care in San Francisco's Duboce Triangle neighborhood is set to become the home of a new mural bringing into focus the meaning of that anniversary.

The mural, titled "Never Alone," will be painted by Serge Gay Jr., who told the Bay Area Reporter he wanted to tell a story through the art, which will be on the side of the building at 401 Duboce Avenue that houses the hospice that opened in 1986. While Maitri still cares for people living with AIDS, it also serves those who are homeless with short-term stabilization services, as the B.A.R. previously reported. (https://www.ebar.com/news/news//285966)

"Definitely I wanted to tell the story of what Maitri represents, their history, the people there, and the diversity of the community in the Duboce Triangle," Gay, a 36-year-old gay man, told the B.A.R. "Overall, it talks about Maitri and the HIV/AIDS pandemic, and the people left behind. I want that story really strongly stamped within the wall."

Gay said that the mural, which has been designed in draft and will be tweaked considering community feedback, includes "a lot of symbols of people who have died from AIDS and HIV and what has happened, and is still happening."

For example, people in red symbolize those lost to AIDS. A lotus flower symbolizes life and rebirth. Animals symbolize both caregivers and companions, and are a reminder of nearby Duboce Park, which is a favorite spot for dogs and their owners.

People interested in providing their input were invited to a recent virtual meeting, according to Joaquin Castillo Arana, a member of Maitri's board of directors, who also said that Maitri has been keeping the Duboce Triangle Neighborhood Association involved in the process.

DTNA did not respond to a request for comment.

Work on the mural is scheduled to begin in "late June or early July" and be "completed by the end of the summer at the latest," the Reverend Rusty Smith, a gay man and Anglican priest who is the executive director of Maitri, told the B.A.R.

Third AIDS-related mural
It will be the third mural in the Castro district that addresses the AIDS epidemic. On 16th Street at Market is the mural "The Hope For A World Cure." Elba Rivera and Clif Cox created it in 1998 in collaboration with a number of other artists under the purview of Precita Eyes Muralists. It was damaged in 2017 by a graffiti artist.

The "Laughing Gorilla" mural, on the side of the building at 19th Street at Castro, was inspired both by the AIDS epidemic and the 1989 Loma Prieta earthquake. Created by David Seibold, a gay man, during the height of the AIDS crisis, it was restored in 2019.

It was June 5, 1981, of course, that the U.S. Centers for Disease Control and Prevention's Morbidity and Mortality Weekly Report noted five cases of pneumocystis pneumonia among previously healthy gay men in Los Angeles. Later, it was understood the men had developed the condition due to HIV infection (though the viral agent was not discovered until 1983).

"That's what this is about," Smith said. "The reason we wanted our building to have a mural is the stigma of HIV/AIDS continues today. Maitri was an instrumental place where care, love, and outreach to people with AIDS was one of a kind. ... Through 'Never Alone,' we look at the bravery that Maitri was part of for people totally alone and abandoned by the community."

Smith told the B.A.R. that the project was brought to Maitri by the Castro/Upper Market Community Benefit District.

"When this mural came to us, Serge had been chosen by a prior process," Smith said, adding that Gay is a "rock star." "We started our process back in September [2020] with different listening groups."

Gay — also known for a mural on the side of the newly reopened Castro bar Moby Dick at 18th and Noe streets — said that he was selected in 2019 for a CBD-funded mural "that was going to be at the site of Fitness SF" but that "the project failed."

"The design was completely different because that was for the Castro but this is for the Duboce Triangle community, so I wanted to make sure the design [worked with] the neighborhood," Gay said. "This is a brand new, different design."

Gay said that the mural at Fitness SF Castro (which is located at Market and Noe streets) "didn't work out" due to "complications with the building owner."

Andrea Aiello, a lesbian who is the executive director of the CBD, stated to the B.A.R. that Gay was chosen through an open, competitive process.

"The mural on Maitri is funded through a grant from the CBD from the SF Arts Commission," Aiello stated in an email, adding subsequently that the money comes from $25,000 awarded in Fiscal Year 2019-2020.

Arana stated to the B.A.R., "Though the location has changed, the underpinning rationale for why [Gay] was picked not only still holds true, but they are underscored by the location and context. ... His ability to present a cohesive and comprehensive submission that indicated not only his artistic ability but his understanding of resourcing (time, supplies, space, etc.) required to execute a mural of this size."

Smith said that it is his fervent hope that the mural leads to greater awareness of the HIV/AIDS epidemic and Maitri's work as the city and country emerge from the COVID-19 pandemic this summer.

"HIV/AIDS is still here, in these marginalized communities where people don't have access to health care," Smith said. "Maitri is still that place of love, care and acceptance. As a young person in the 1980s, that's what we said to people we cared for: that we'll never forget you, and will continue to fight until there's a cure, and so this 40 year anniversary is hopeful and heartbreaking at the same moment."

Former Maitri ED back at the helm
Sign up!