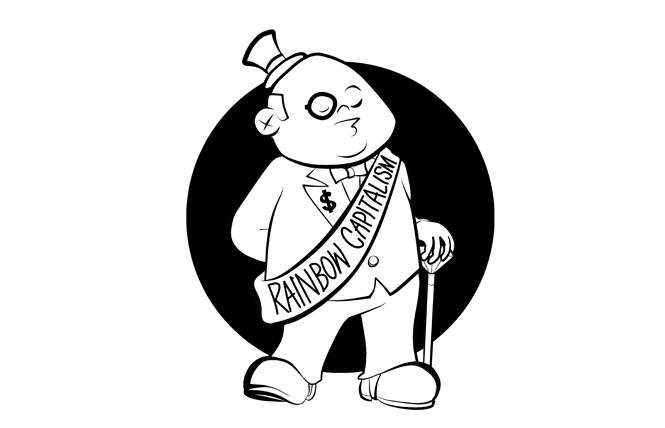 This Pride season, I have a new enamel pin on my jacket, displaying the five stripes of the transgender pride flag. They are within the shape of Mickey Mouse's head.

I've been a lifelong Disney fan, and two of my closest relatives worked at Disneyland, so as soon as I heard there was a trans-specific piece of Disney memorabilia, I was ready to throw money. At the same time, I find myself questioning this product.

Pride-based merchandise is nothing new, and neither are critiques of the same. Finding rainbow festooned items have been common with retailers for quite a number of years now, and the changing political landscape post-Obergefell (the 2015 U.S. Supreme Court same-sex marriage decision) has only fueled this. Companies ranging from Budweiser to Deutsche Bank, after all, typically sponsor Pride parades and corporate America wants to cash in.

Including, yes, The Walt Disney Co.

While some brands are still content to provide a handful of rainbow-themed items, maybe going so far as to include phrases like "Love is Love" to the mix, it is becoming more and more common to see retailers expand their line, including the Philadelphia or Progress Pride flags, and open up the line to designs beyond merely the standard rainbow flag. For example, that Disney pin came in not only in the aforementioned trans Pride flag, but also in lesbian, bisexual, and the Philadelphia pride flag variant with its black and brown stripes.

Finding the trans representation is a game of "Where's Waldo" for me, as I look for brands that may have gone beyond simply slapping a rainbow on their logo and calling it a day.

For example, Stolichnaya put out a Harvey Milk limited edition vodka bottle, featuring a drawing of Milk based on a photo from the 1978 Gay Pride parade in San Francisco. The image, however, has been altered. The sign in Milk's hand is updated to a modern slogan, while the crowd behind him has been altered and made more modern in appearance. Oh, and yes, flags were added, with both the rainbow flag, as well as a trans and bi flags, added to the side.

You won't find these in my local Target, though. When I visited its section, only the most basic rainbow-wear was available, including an "Ally" T-shirt and rainbow adorned Shortalls. Not all stores carry things beyond the basics of the set, which meant that it failed to earn a whopping $3 from my potential bandana purchase.

As I see the trans merchandise start to join the expected rainbow goodies on major retailer's shelves, however, I find myself of two minds. As you could gather from what I've already written, I question the inclusion of these companies and their products shoehorned into Pride Month.

I would like to think that my local Target set up its Pride display in the far back corner of the store, somewhere to the right of sportswear, as a way to avoid controversy. That the cardboard rainbows were mostly disconnected from the sign above the display — hanging in such a way to be largely overlooked by most consumers — could have simply been an oversight, and the lack of all but the bare minimum of content — something apparently true of most of the locations in a 40-mile radius of me — was simply to protect its profit margins.

I suppose, too, that I should be happy it even bothered to put out anything LGBTQ-related. To the best of my knowledge, this was the first year it did so. Plenty of other retailers also don't put out anything Pride-related, and few have gone beyond rainbow-themed goods.

That said, they could be doing us what corporations do for breast cancer awareness, and use pride as a cynical ploy to show themselves performatively celebrating Pride, all the while providing assistance to those who would stand against the LGBTQ community in other ways.

Oh, but companies such as AT&T, Comcast, General Electric, Home Depot, and UPS, among others, were called out by the Reclaim Pride Coalition in 2019 for doing exactly that, donating big money to politicians who voted against LGBTQ rights while festooning their logos with pro-LGBTQ messaging during Pride Month.

At the same time, I go back to this Disney pin, or even those Target stores that are carrying the full line of Pride-themed merchandise. Somewhere out there may be a young trans child who may come across, for the first time, something trans Pride related. It could show them that they are not alone, or even that their life is worth living. It could signal to them, thanks to this one pin or cheap bandana, that a popular culture brand finds they have value, even if the company is really only seeing that value in cold, hard cash.

So, in the end, I find myself unsure of this development. How much corporate co-opting of Pride is worth it, knowing that this could help people see that we do have a place in this world, especially in a year marred by so much hatred in the statehouses of this country?

I don't have an answer, but seeing the trans presence in more and more visible ways feels heartening. It seems like a strange, small victory, but an achievement nonetheless.

Gwen Smith tweeted at Disney in past years for a trans-themed Mickey antenna ball. You'll find her at www.gwensmith.com