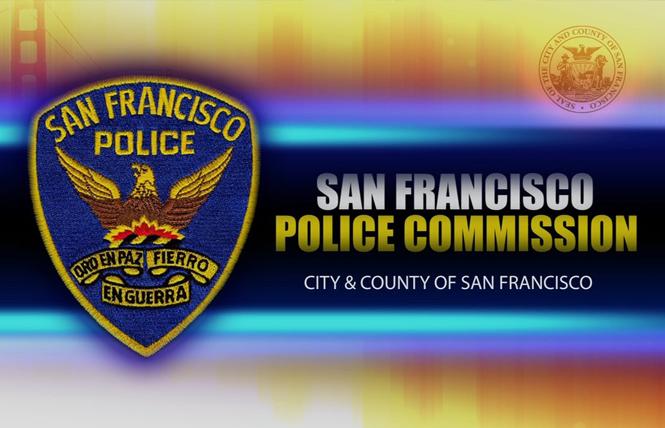 The San Francisco Police Commission needs an out person on it and the Board of Supervisors has the opportunity to make that happen. Photo: Courtesy SFPD

Now that Petra DeJesus has left the San Francisco Police Commission, the Board of Supervisors, which selects the candidate for that seat, needs to ensure that an LGBTQ individual is chosen. With the departure of DeJesus, a lesbian who served for 16 years, the high-profile oversight commission no longer has any out members. (This is similar to the effort to replace an outgoing LGBTQ member of the San Francisco Historic Preservation Commission, which we previously opined on, except in that case, Mayor London Breed makes the nomination for the vacancy.) The police commission has long had LGBTQ representation, including Gwenn Craig; the late Wayne Friday, a former Bay Area Reporter political columnist; Theresa Sparks, who became the first trans person elected president of the body; Jim Hammer; David Campos; and the late Julius Turman.

The police commission has made strides in updating the San Francisco Police Department's use of force policies, as DeJesus told us in a recent interview. After last year's police killing of George Floyd in Minneapolis (a former officer was convicted of murder in that case earlier this year), leaders in cities around the country began conversations about reforming their police departments; San Francisco was no different. Last fall, Mayor London Breed convened a steering committee to examine alternatives to police officers for responding to some 911 and 311 calls for assistance. She also proposed redirecting $120 million from SFPD to the Black community over the next two years, with some money already reallocated to programs that include services for transgender and Black LGBTQ individuals.

Having an LGBTQ member on the panel is critical for a number of reasons. While the police department is far more inclusive than decades ago, recent incidents call attention to the need for a consistent and constant commitment to root out discrimination. Last June, during one of the protests after Floyd's death, a nonbinary SFPD officer at Mission Station was sent home for insubordination for wearing earrings. It stemmed from the department having an outdated, transphobic dress code that was arbitrarily enforced. By December, the police commission had approved the department's revised, gender-neutral grooming standards policy. The policy change had been in the works for awhile, Police Chief William Scott told us, but the COVID pandemic delayed focus group meetings with officers to discuss the changes.

In fact, just this week, Scott presented an update to the supervisors on the department's Collaborative Reform Initiative, or CRI. One component, a racial equity action and inclusion plan, is currently underway in partnership with the San Francisco Human Rights Commission. "Phase I of the reforms — many of them already in progress — cover the full breadth of the department's institutional and structural realms, spanning hiring and recruitment; retention and promotion; discipline and separation; leadership and management; professional development and mobility; and organizational culture," a description of the plan on SFPD's website states. "Another 10 action steps detailed in the report will be led by the San Francisco Police Commission, the police department's civilian oversight and governing body." These include having the commission regularly schedule discussions on racial equity issues and expand the ability of the panel to hear from diverse voices from a place of influence. (This latter goal has been started and is ongoing, the report states.)

Nonetheless, there have been discriminatory incidents in the SFPD against trans police officers, including one that resulted in a $150,000 settlement from the city because he was repeatedly misgendered. The police commission had to sign off on that settlement, along with the Board of Supervisors, part of which states that SFPD will attempt to redress systemic transphobia in the department.

DeJesus, who's an attorney, brought an urgency to police reform that we hope her successor continues. While the commission narrowly voted 4-3 in 2017 to allow officers to carry tasers, DeJesus was opposed — and continues to be. The supervisors never allocated any money for the purchase of the equipment, so until that changes SFPD officers do not use them. We opposed Proposition H in 2018, which was an end run around the supervisors by the San Francisco Police Officers Association to get the voters to approve tasers. We still maintain our position that it's the police commission's job to set SFPD policy. In light of all the deaths associated with taser use in police encounters around the country, it's probably better that they were never used here. Too many times they're deployed with deadly consequences on people having a mental health crisis and they are often ineffective, in our opinion, as well as being cruel.

The Police Commission consists of seven members, three of whom are appointed by the supervisors. Anyone can apply for this vacancy, according to the city code, and the candidates go before the supervisors' rules committee. The full board would then vote. We would encourage qualified LGBTQ people, particularly trans people of color, to apply, and we urge the Board of Supervisors to give them a fair hearing. (The first and last trans person on the commission was Sparks.) Trans people have historically been victims of police harassment — even in San Francisco — and their lived experience would greatly benefit both the commission and SFPD.