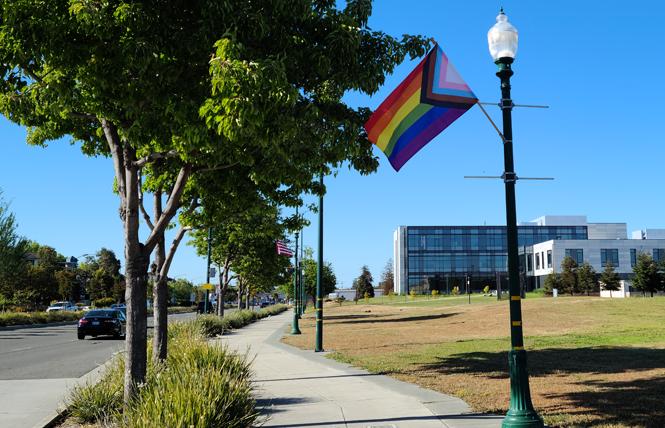 The city of Alameda recently installed Progress Pride flags, alternating with U.S. flags, along a stretch of Webster Street by the College of Alameda. Photo: Cynthia Laird

Various Bay Area cities will be kicking off Pride Month next week with flag raising ceremonies the morning of June 1. Other municipalities will follow suit on subsequent days of the month.

Due to the ongoing COVID pandemic, some of the gatherings will be done without a large public presence or none at all but will be livestreamed. Some cities are inviting LGBTQ community members and others but will be imposing safety protocols like mask wearing and social distancing.

The city of Alameda in the East Bay already put up Progress Pride flags by the College of Alameda campus. It is part of the Peralta Community College District, whose board adopted a Pride Month proclamation Tuesday night.

"The flags along Webster Street were placed by the city of Alameda but we're glad they are there," stated Mark Johnson, executive director of the college district's Department of Marketing, Communication & Public Relations. "The Peralta Colleges are enthusiastic about LGBTQ Pride Month."

One of the first cities to hoist a Pride flag next Tuesday in support of its LGBTQ residents will be the South Bay city of Morgan Hill. Gay City Councilman Rene Spring will be on hand for the 9 a.m. ceremony at Morgan Hill City Hall, located at 17575 Peak Avenue.

The outdoor-only event is requiring people wear masks and remain a good distance apart from other attendees. The city will be raising the Progress Pride flag, designed by Daniel Quasar in 2018.

It features the standard six colors of the traditional rainbow Pride flag and a titled chevron made of black and brown stripes to represent Black and Latinx people and the blue, pink, and white stripes of the transgender pride flag. It points right to symbolize marching toward a better future.

At the request of San Mateo County LGBTQ leaders, a number of cities on the Peninsula will also be flying the Progress Pride flag throughout Pride Month this year, including Belmont and South San Francisco. And the county government will also raise the Progress Pride flag for the first time this year June 1 in front of its offices in Redwood City.

It will take place at 10:15 a.m. and will be viewable via Facebook Live. Supervisor Dave Pine, LGBTQ Commission Co-Chair Dana Johnson and San Mateo County Pride Center Director Frankie Sapp are expected to make remarks before hoisting the flag. For more info on the event, visit https://fb.me/e/L00PmMbR

San Carlos will also raise the Progress Pride flag June 1, though out City Councilwoman Laura Parmer-Lohan, currently serving as mayor, told the Bay Area Reporter the time for when it will do so has yet to be determined. Video of the ceremony should be posted to the city's social media feeds that day at https://www.instagram.com/cityofsancarlos/ and https://www.facebook.com/search/top?q=city%20of%20san%20carlos

"I will be issuing a proclamation on June 14," added Parmer-Lohan, who is running in 2022 to be the first LGBTQ woman on the San Mateo County Board of Supervisors.

The county's LGBTQ Commission has compiled a list online of what all 20 cities and towns in the county plan to do for Pride Month at the website https://lgbtq.smcgov.org/pride-visibility-information-materials According to it, 13 will be flying a Pride flag this month.

"Most cities have issued a proclamation and they are taking the time to pass a flag policy. More than likely they are raising their flags on June 1, and if the area is blank, we truly don't know what they are doing," explained commission director Tanya Beat, who identifies as lesbian and queer, about the chart.

So far the only two to say they won't be raising a Pride flag this year are Atherton and Burlingame, while the San Mateo Union High School District voted last week not to raise a flag but did issue a Pride Month proclamation.

Across the bay gay Dublin City Councilman Shawn Kumagai will help raise the Progress Pride flag during a small ceremony at 6 p.m. Tuesday. It will remain up in front of City Hall all month.

"I'm hopeful that we will see all five cities/towns in the Tri-Valley raise the Pride flag this year," Kumagai told the B.A.R.

The Danville City Council approved flying a Pride flag May 18 in front of City Hall throughout June, while the San Ramon City Council voted May 25 to fly the Progress Pride flag next month on a flagpole the city owns at the corner of Alcosta Boulevard and Bollinger Canyon Road per a new policy for commemorative flags it adopted earlier this month.

The Pleasanton City Council is expected to vote on flying a Pride flag at its June 1 meeting. The Livermore City Council approved by consent flying the Philadelphia version of the Pride flag, which features the black and brown stripes in addition to the six rainbow colors, at its May 24 meeting.

The details of when it will be flown are still being worked out, said bisexual councilwoman Brittni Kiick, elected as her city's first LGBTQ councilperson last November.

"Still waiting on details about the date that it will be put up and the potential event. It would be small with just a council person and a member of Livermore Pride," she told the B.A.R.

Gay Santa Clara City Councilman Anthony Becker will help preside over the Silicon Valley city's Pride flag raising June 4 for the first time since being elected last November. The ceremony will begin at 9 a.m. that Friday and should be viewable via the city's Facebook page at https://www.facebook.com/CityofSantaClara

In San Francisco, Mayor London Breed will join LGBTQ community leaders at 11 a.m. Monday, June 7, at City Hall to raise the traditional version of the rainbow flag on the flagpole off the mayor's balcony that fronts Civic Center Plaza. The event is to be streamed online and viewable at https://www.youtube.com/c/mayorlondonbreed.

Up in Sacramento, state LGBTQ legislative leaders will hold their Pride flag raising ceremony the morning of June 1. No public ceremony is being planned due to COVID, but a special commemoration for Pride Month is expected later in the month.

SF City Hall to reopen
After being closed for more than a year due to the COVID pandemic, San Francisco City Hall is reopening to the public Monday, June 7, for those needing in-person services at the offices of Assessor-Recorder Joaquin Torres and gay Treasurer-Tax Collector José Cisneros.

Those looking to obtain marriage licenses from the office of County Clerk Diane Rea will also be able to do so starting that day, while civil marriage ceremonies will return June 9. For more information and to make an appointment online, visit https://sfgov.org/countyclerk/

Beginning Tuesday, June 8, district supervisor offices are set to open on an appointment-only basis. And the Board of Supervisors will have its first in-person meeting June 15, having met remotely since March 24 last year. Public comment, however, will continue to be done remotely until the city updates its health and safety guidance for large indoor public gatherings.

"This is definitely a milestone in our fight against COVID-19. We've gotten this far with your cooperation and support, along with the incredible emergency response from our Disaster Service Workers at Moscone South," stated District 3 Supervisor Aaron Peskin in a recent email he sent to constituents. "I join my colleagues in thanking the City team for their tireless work addressing logistical, safety, and technological considerations and resources to ensure a safe and seamless return to the City Hall Chamber, including the city administrator, sheriff, department of technology and the staff at the clerk of the Board."

Web Extra: For more queer political news, be sure to check http://www.ebar.com Monday mornings for Political Notes, the notebook's online companion. This week's column reported on a potential federal change that could boost the collection of LGBTQ health data.