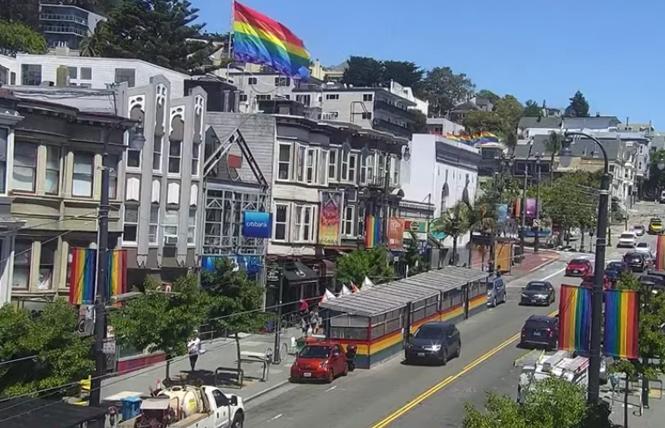 The future looks blurry for the proposed network of Castro district surveillance cameras, as neighborhood groups opposed to the plan await word from the Upper Market/Castro Community Benefit District.

"We're in a holding pattern," Stephen Torres, a gay man who is an advisory board member of the Castro LGBTQ Cultural District, told the Bay Area Reporter. "We're waiting to hear back from the CBD because nothing has happened since the town hall."

Last month's town hall on the topic, hosted by the CBD, was slammed as being one-sided in favor of the proposed camera network after the cultural district withdrew from the discussion due to the exclusion of its allies. The cameras would be installed with a $695,000 grant from tech mogul Chris Larsen, who was not present at the town hall and has not responded to requests for comment.

At the time, the B.A.R. reported that the only sure thing was that there'd be more discussions going forward. But according to Torres, speaking on behalf of opponents of the plan including the district and the Harvey Milk LGBTQ Democratic Club, plans for a public discussion on the pros and cons of cameras have not materialized.

"So many of those who attended that town hall seemed to have a consensus it'd be in a public forum," Torres said of future discussions. "We in the coalition [of those opposed to cameras] felt we needed to respect that, so that's where we left it."

The B.A.R. has contacted Andrea Aiello, a lesbian who is the executive director of the CBD, on multiple occasions to ask about the future of the proposal. Aiello responded, once, to inquiries stating in an email, "We can talk cameras when I have something to tell you ... OK?!"

The B.A.R. informed Aiello that even without comment it would be reporting an update about the cameras, and asked if she and camera opponents had set up a date to meet, or if this was not happening; what the next steps are before camera approval; and what her thoughts are about the criticism that the town hall was unbalanced.

The agenda for the most recent meeting of the district's board (and the only since the April 27 town hall), which was held May 5, included nothing about the camera proposal. (The minutes are not yet posted.)

"Nothing has come out of the CBD," Torres said. "I wish I could tell you more. I wish I knew more, quite frankly."

Torres said that the cultural district and the CBD are collaborating effectively and profitably on other matters, such as last Saturday's Harvey Milk Day celebrations in the Castro neighborhood.

Catie Arbona, a queer woman who is co-chair of the Alice B. Toklas LGBTQ Democratic Club, said that organization will continue to advocate against the proposal. The club joined the Milk club and the cultural district with an op-ed in the San Francisco Examiner May 14 saying that the proposal to install a 125-camera network would turn the Castro "into a surveillance state."

"If the CBD is unwilling to pay attention to the concerted community opposition that ours, Milk's and the LGBTQ Cultural District's op-ed represents, and doesn't take steps to withdraw their proposal, then our club will continue to make that opposition known, in the press and in the neighborhood," Arbona stated. "This is an issue of real importance to our board and we're ready for a long fight if necessary."

For its part, Castro Merchants Association President Masood Samereie, a straight ally, had praise for the plan in a statement to the B.A.R. — but reiterated that the business group voted against endorsing the proposal until such time as " business owners, residents, and community organizations" could find a compromise "that would work for everyone."

"As we have stated in the past, Castro Merchants is interested in any effort that enhances the safety of our iconic neighborhood for business owners, consumers and residents," Samereie stated. "The Castro Merchants board voted against moving the proposal originally presented by the CBD to our membership for a vote until a broader discussion could be had with business owners, residents and community organizations to see if there is a solution that would work for everyone."

Samereie stated that at least the CBD is coming up with ideas.

"We do applaud the CBD for bringing forward concrete ideas and opportunities that have the potential to move the neighborhood forward," Samereie stated. "Whether or not the camera proposal is ultimately accepted by the community, it is imperative that every single resident, business, and neighborhood organization takes an active role in supporting a healthy and prosperous Castro."

Bay Times cameras come under scrutiny
As the B.A.R. previously reported, the Castro Street Cam produced by the San Francisco Bay Times already provides a livestream of the neighborhood on YouTube.

Arbona stated that "we're not fans" of that, either.

"While the goal of providing images of the rainbow flag to people who may be stuck at home or otherwise unable to visit the Castro in person is admirable, 24/7 access to views of sidewalks and bedroom windows is not something that should be available to anyone with an internet connection," Arbona stated. "There are ways to unite distant members of our community without broadcasting private lives around the world."

Torres struck a different tact regarding the Castro Street Cam.

"We are trying to tackle one problem at a time," Torres said. "What raised concerns with us are the extensive nature of [the proposed CBD] cameras. Those, through the Bay Times, are a different thing."

Torres said that the biggest differences between the Bay Times' cameras and the proposed CBD cameras are that the CBD camera system would be "extensive" and "without oversight."

"I don't know if the concern is so much over the CBD as much as what happens when the footage is turned over to AVS," Torres said, referring to Applied Video Solutions, which would maintain the cameras. "[The Bay Times' cameras] are nowhere near as advanced technology as these other cameras we are talking about, on which the facial recognition is quite advanced."

The Bay Times did not respond to a request for comment. Co-publisher Betty Sullivan declined to comment for a story last year, saying she didn't "want to be in your story."

Ahead of town hall, LGBTQ Alice Dem club comes out against planned security cameras in SF Castro district
Sign up!