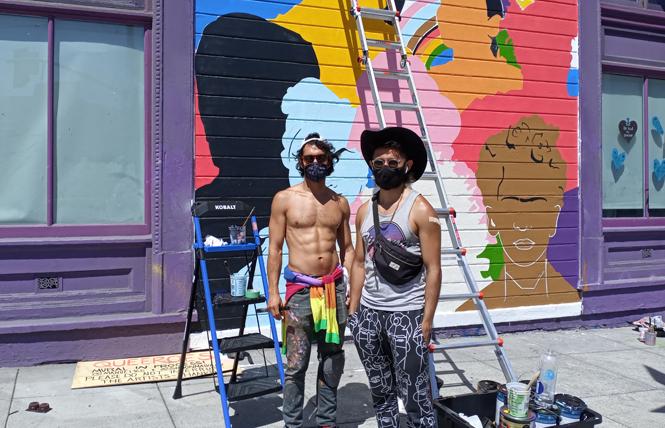 Artists Juan Manuel Carmona, left, and Simón Malvaez work on their new mural on the side of the San Francisco LGBT Community Center. Photo: Scott Wazlowski

Two queer San Francisco artists have finished work on a new mural on the side of the San Francisco LGBT Community Center just in time for the start of Pride Month in June.

As the Bay Area Reporter previously reported, the center chose the two artists to replace a honey bear mural by fnnch, a straight artist, that had been defaced after he was criticized over describing himself as an "immigrant" to San Francisco since he hails from the state of Missouri. (He later apologized.)

On May 19, the center announced that those two artists are Juan Manuel Carmona and Simo?n Malvaez. The mural they worked on — titled "Queeroes" — calls attention to a diverse slate of LGBTQ community heroes.

Carmona is receiving a $7,000 commission and Malvaez is volunteering, the center stated.

There will be some event to commemorate the completion of the mural, but according to Miguel Raphael Bagsit, the communications manager for the center, the center does not "have clear insight" yet as to what that will entail.

Speaking with the B.A.R., Carmona, 34, said he brought up to MORE! in September 2019 the idea of painting the mural on the side of the center, at the intersection of Market Street and Octavia Boulevard in the Upper Market neighborhood.

"I approached her and said, 'I want to put a mural on that purple wall.' She introduced me to Roberto," Carmona said, referring to Roberto Ordeñana, the center's deputy executive director.
MORE! told the B.A.R. that Carmona is part of her chosen family.

"I met Manuel when he moved to San Francisco in 2011 and took him to the Lucky Penny on Geary Street to feed him," MORE! stated in an email. "I immediately took him in as part of my chosen family. It is tough to survive in this city as an artist. I loved his artwork and believed in his ability to create and share it here in his newfound home.

"In 2019, I asked him if he would create the poster artwork for my annual Pride event," MORE! continued. "He jumped on it and began building a story of how he wanted to interpret me. When I got to see it, I immediately said — that is a mural! His instantaneous response was that he wanted to paint a mural. So I reached out to my friend and business owner, Todd Barkett [of the former Unionmade space], and asked if we could paint on the side of his building at 18th and Sanchez. It has become an iconic image that I am very proud to have in the Castro district."

MORE! confirmed that she spoke with Ordeñana, president of the city's arts commission, about Carmona.

"Ordeñana reached out to me to talk about the mural project on the side of the center's building in 2019," she stated. "I have long been a champion of local queer artists and was happy to share some thoughts with him about getting a mural on the side of the historical site of the Victorian building. Manuel's work came up in the conversation."

However, the mural Carmona was envisioning couldn't go forward because of the onset of COVID-19.

"Malvaez started collaborating on another mural of me with Manuel — curated by local artist fnnch to support other artists. The project is called the 'Painted Gentlemen' and remains up for six months and then gets rotated out with new artists' artwork. Together they created a new piece at Alamo Square revolving around the message of getting vaccinated," MORE! explained. "Then it was time for the center's project of having a new mural at the beginning of every Pride Month, and Manuel reached out to me with his thoughts on the icons he would depict. He mentioned wanting to include me, and I tried to push him to have other trailblazers who I considered much more worthy. But, here I am — getting honored with another piece of art in San Francisco. I'm not mad."

Center officials pleased
Ordeñana told the B.A.R. that the center is "thrilled" to collaborate with Carmona and Malvaez.

"We are thrilled to partner with Juan Manuel Carmona and Simo?n Malvaez, two incredibly talented local artists from the Latinx and queer communities," Ordeñana stated. "Since 2002, the center has exhibited work from a diverse array of over 200 visual artists. We believe in the importance of art and the critical questions art raises and we are delighted that Juan Manuel and Simon chose the center as a platform for them to celebrate and honor who they are and the communities they represent."

Center officials have previously stated that they intend to replace the mural on the side of its wall annually, and that the one fnnch painted featuring honey bears in 2020 in the midst of the pandemic, was to be replaced around this time in 2021. Carmona said his idea for a mural would not have worked in a time of social distancing because he wanted people to interact with it physically.

"We wanted to have a party," Carmona said. "That was one of the main plans; it's just been a complicated year-and-a-half now."

Carmona, who has a master's of fine arts from Academy of Art University in San Francisco, said he has been drawing all his life but started doing public art in 2017 with the aforementioned mural of MORE! in the Castro neighborhood.

"Our first idea was a Mexican and American soldier kissing," Carmona said, describing how they brainstormed what they'd like to paint on the side of the center. "But as much as I'm a Mexican American, it didn't represent the center. We wanted to have something that speaks to the entire community, not just gays, for example."

Malvaez, 29, joined him to do work on murals at the Mission neighborhood bars Bondies Bar and El Rio. Malvaez told the B.A.R. he has been doing art for the last year. Malvaez said eventually three or four proposals were made.

"One of those we are painting today, using each one of the colors of the Pride Progress flag because each is a character and icon to represent the community," Malvaez said.

Carmona said that "we chose people that people could identify with," such as Milk, Khalo, and Mahogany.

"We wanted to represent as much diversity as we could," he explained, "which is why we have African Americans, as well as people of color."

Malvaez said that each month the center will highlight one of the queeroes in the mural.
"The center will display on social media each of the individuals, so if you don't know who they are, you can find out," Malvaez said.

"Our community of queer heroes is so beautifully expansive and goes far beyond this list of icons," the center stated in a blog post highlighting its social media campaign. "We all have a personal list of heroes we admire — whether it's chosen family, an inspiring community member, or a cultural icon. While one mural could never encompass all the stories of our diverse community, we hope it will serve as a launchpad for all of us to connect, knowledge-share and discover rising Queer heroes in our communities through one another — and we want to spotlight your heroes throughout Pride month!

"Using the hashtag, #Queeroes, tag us in social media posts that you're dedicating to your personal Queeroes or send your photos/dedications to press@sfcenter.org for a chance to be featured on our channels. We'd love to celebrate the people who uplift you!" the center added.

Early next year, the center plans to hold an application process for artists who want to paint the next mural.

"We are committed to equity and inclusion as core tenets of our work, and our goal with this mural project is to spotlight a variety of LGBTQ+ and BIPOC perspectives, art and?artists representing our diverse communities in the years ahead," Bagsit stated in an email.

When asked if Black, Indigenous, and other people of color and LGBTQ people will be prioritized in future artist selection (fnnch was none of these, which elicited some community controversy), Ordeñana repeated Bagsit's above-quoted statement verbatim.

Roma told the B.A.R. it was surprising to be included in the project, calling it "epic."

"When Simon [Malvaez] reached out about featuring me in the Queeroes mural, I almost said 'Do you have the wrong number? This is Roma,'" Roma recalled. "I mean, never in my life did I expect to be featured alongside such talented, impactful, accomplished, and beloved queer icons. I'm honored and seriously humbled, but also not so secretly thrilled. In fact, I would like to apologize in advance for all of the photos and videos I plan to share on social media, but come on, this is epic!"

Mahogany was also honored, and gave ideas about who else could be featured in a mural.

"I'm honored to be included in this work," Mahogany stated. "Of course, I know there are many more people, past, present, who could have been included: [gay San Francisco drag queen and Imperial Court founder] José Sarria, [lesbian San Francisco writer] Alice B. Toklas, and more. There are so many who have given so much to our city, so I am grateful to have been chosen to be included."

New mural going up on Powerhouse wall
Sign up!