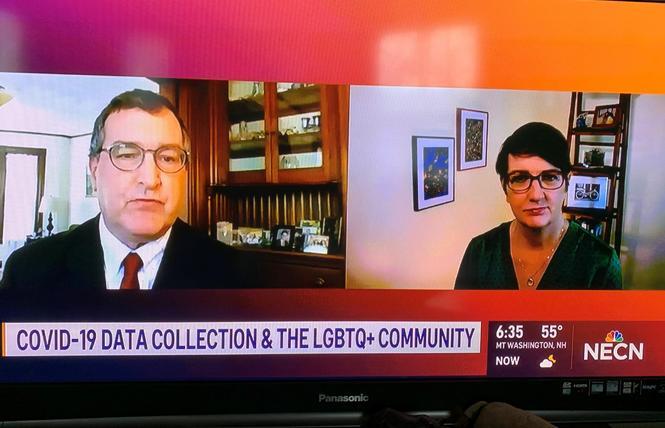 Sean Cahill, left, seen discussing the importance of SOGI data in a New England Cable News appearance in May 2020, is one of several people pushing a federal agency to incorporate the information in health records. Photo: Screengrab

LGBTQ advocates are pushing a federal agency to include the collection of sexual orientation and gender identity among patients' health records when it releases an update this summer on what information should be exchanged between health care providers, governmental agencies, and other groups.

The federal Office of the National Coordinator for Health IT is expected to publish on July 1 version 2 of the United States Core Data for Interoperability, known as USCDI v2. It sets the standards nationwide for health information exchange and establishes the baseline for what data is commonly exchanged across care settings for a wide range of uses.

But a draft version of the proposed updates released in January did not include any questions regarding someone's LGBTQ status among the 15 questions listed under patient demographics. In addition to race, ethnicity, and age a question does ask about a person's birth sex. But the only answer options listed are male, female, or unknown.

In a letter sent April 15 to National Coordinator for Health IT Micky Tripathi, Ph.D., and?Deputy National Coordinator for Health IT Steven Posnack, the Fenway Institute at Fenway Health in Boston, along with a coalition of 65 partner organizations working in LGBTQ health care, requested that the SOGI questions be included in the final USCDI v2, along with intersex status, name used, and pronouns.

"Based on many years of experience collecting and using patient SOGI data in Electronic Health Records (EHRs), advocating for inclusion of SOGI in national health IT systems and surveys, and training health centers and other organizations in how to collect and use SOGI to improve quality of care, the Fenway Institute and our colleague organizations strongly encourage ONC to include SOGI standards in USCDI v2, including sexual orientation, gender identity, intersex status, named used, and pronouns," wrote Sean Cahill, Ph.D., director of health policy research at the Fenway Institute, on behalf of the coalition of LGBTQ groups.

The same day last month as the LGBTQ groups sent in their letter, an advisory committee to the Office of the National Coordinator for Health IT also called for the SOGI questions to be added to USCDI v2. As Healthcare Innovation reported on its website ONC Health Information Technology Advisory Committee Co-Chair Dr. Steven Lane, the clinical informatics director for privacy, information security & interoperability for California-based Sutter Health, said knowing a patient's SOGI demographics "is fundamental to patient safety, care and equity."

National standards
But Lane also cautioned that the task force's SOGI recommendation is contingent on the Health Level Seven International (HL7) standards finalizing an implementation guide in time, reported the medical news publisher. As the Bay Area Reporter has previously reported, the HL7 standards' omission of sexual orientation data and outdated terms for gender identity have hampered efforts in California and other states to collect health information about LGBTQ people in order to better address what is ailing them.

California health officials and LGBTQ state lawmakers have called on the group that oversees the HL7 standards to address the concerns about SOGI data collection. In a January 25 letter to state leaders, Health Level Seven International CEO Dr. Charles Jaffe committed the organization to looking into the issue, as the B.A.R. reported.

"HL7 definitely has an impact. The way it is asking the gender identity question is bad and they don't ask about sexual orientation at all," Cahill had told the B.A.R. "I hope they will turn on a dime and change it, but that is not traditionally how they have operated."

The SOGI issues could soon be fixed, as the LGBTQ groups' letter noted that HL7's Gender Harmony Project is proposing the inclusion of gender identity, recorded sex or gender, sex for clinical use, name to use, and pronouns. In another encouraging sign the group SNOMED, which sets standards for medical terms, has established a sex and gender clinical group to review and update data elements with regard to sex, sexual orientation, gender identity and related anatomy.

COVID showed need for information
The issue has taken on greater import over the last year due to the COVID-19 pandemic, as the lack of SOGI data on people testing positive for the novel coronavirus has made it impossible to know how widespread infections have been in the LGBTQ community or how many LGBTQ Americans have been killed by the virus. Many LGBTQ people have underlying health issues that make them more susceptible to COVID-19 or work in front-line industries that place them at higher risk of contracting the virus.

California officials took steps last summer and in the fall to address the lack of SOGI data but then ran into problems with the health record systems being used around the state. They either had not been updated to ask the SOGI questions or were unable to share the data with state health officials because of the problems with the HL7 standards.

Thus, there is no data on the number of LGBTQ Californians who have been vaccinated for COVID, as the B.A.R. was first to report in March. The inability to get good SOGI data during the COVID pandemic has shocked and frustrated lawmakers who years ago had passed legislation requiring a number of the state's health and social service agencies to collect the information. Other states such as Massachusetts have also sought to collect SOGI data but have encountered similar issues in reporting the information.

Since 2012 the Fenway Institute has engaged with the federal health IT office on adopting and implementing national SOGI health IT standards. As it noted in its letter sent in April, the agency did adopt SOGI standards as required fields in the "demographics" section of the 2015 Edition Base Electronic Health Record Definition certification criteria, making SOGI part of all Certified Electronic Health Record Technology (CEHRT) products.

SOGI has also been included in the Interoperability Standards Advisory since it was first published in 2015, noted the LGBTQ groups' letter. In October that year the federal office required that health IT modules allow a user to record, change, and access SOGI data as part of the demographics certification criterion.

But there is still no requirement that the SOGI data be exchanged using certain standards, only that systems enable a user to record sexual orientation.

In comments posted online by the Office of the National Coordinator for Health IT regarding the addition of SOGI data to the USCDI v2, the agency noted there were no privacy or security concerns with asking about sexual orientation. It also noted the importance of knowing a patient's gender identity.

"For example, transgender patients are known to face health disparities, and lack of adherence to preferred names and pronouns can lead to embarrassment and even discrimination in healthcare," read one comment.

Cahill recently told the B.A.R. he is hopeful that USCDI v2 will be expanded this year to include sexual orientation, gender identity, intersex status, name used, and pronouns.

The groups noted that there is a growing consensus within the medical profession on the importance of having SOGI data. The Institute of Medicine and the National Academies of Science, Engineering, and Medicine are among the groups calling for SOGI to be asked in clinical settings, while the federal Bureau of Primary Health Care now requires community health centers to report the SOGI of their more than 20 million adult patients.

"It is especially important that SOGI data collection and use be standardized and, at a minimum, encouraged, and even better, incentivized or required, so that we can increase our understanding of health disparities with high quality clinical data," wrote the LGBTQ groups in their letter. "It is also important to cross tabulate SOGI data with other demographic data to understand the intersection of [sexual gender minority] disparities with those affecting members of racial and ethnic minority groups, people with disabilities, immigrants and non-English speakers, people living in rural areas, and any other disparity populations."

For more information about the federal data initiative, click here.

Due to the Memorial Day weekend, the Political Notes column will return Monday, June 7.

California not tracking COVID vaccinations in LGBTQ residents
Sign up!