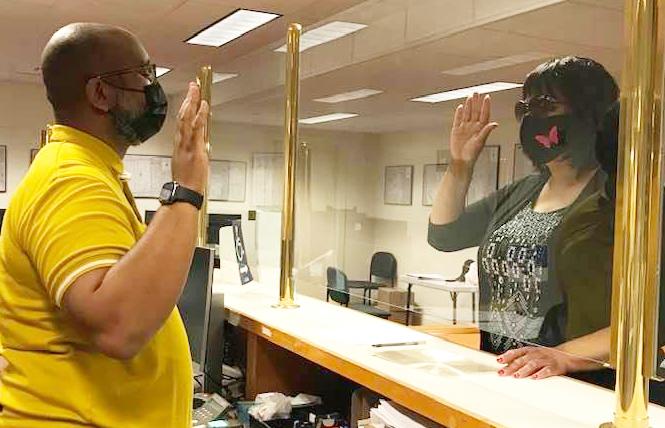 Well-known transgender advocate Ms. Billie Cooper is mounting a bid to be elected in 2022 to San Francisco's District 6 supervisor seat. The longtime Tenderloin resident would be the city's first transgender supervisor and first Black LGBTQ supervisor on the board should she be elected.

Cooper, a Navy veteran who has lived with HIV for more than four decades, would be the first HIV-positive person elected to the Board of Supervisors and only second long-term HIV survivor to serve on it. The first was gay former District 8 supervisor Jeff Sheehy, who was appointed to fill a vacancy in 2017 but lost his election bid the following year.

"I am a resident, I am a stakeholder of the Tenderloin. Put me in office and it will be a new beginning and a new face of District 6 supervisor," Cooper, 62, told the Bay Area Reporter. "District 6 has never had an unapologetically Black person as supervisor the whole time I have been here. I would be the first Black transgender woman having a seat at the table."

But Cooper, as a first-time candidate for public office, faces long odds in winning the race, especially if the incumbent, Supervisor Matt Haney, runs for reelection on the ballot next November. Haney has yet to officially mount a reelection campaign or pull papers to seek a second four-year term with the city's elections department.

There is a chance he could seek the city's 17th Assembly District seat in a special election later this year should Mayor London Breed appoint the incumbent, Assemblyman David Chiu (D-San Francisco) as city attorney. Later this summer it is expected that City Attorney Dennis Herrera will become general manager of the city's public utilities commission.

Breed will appoint a new city attorney once Herrera departs his City Hall office to move into the PUC's building nearby. It is widely expected that Breed will pick Chiu, prompting a special election to be held to serve out the remainder of his term through December 2022.

Haney is said to be contemplating jumping into the contest, though when contacted this week by the B.A.R. he said he has not made any decisions yet on his next political race. His focus for the time being, he said, is on chairing the supervisor's budget committee as the board works to approve a spending plan for the 2021-2022 fiscal year. Breed is expected to release her budget proposal June 1.

When pressed about seeking the Assembly seat, Haney told the B.A.R., "I have not made any decisions on that nor do I know if there is even going to be an open Assembly seat."

If there is and Haney were to win the seat then Breed would get to appoint his replacement on the board. His chief legislative aide, Honey Mahogany, has already said she plans to run for the District 6 supervisor seat once Haney departs. Should Breed pick Mahogany to fill a vacancy, it would be a historic choice as Mahogany is a Black queer, nonbinary transgender native-born San Franciscan.

Haney told the B.A.R. he expects to make a decision on his political plans in the coming weeks.

"I expect I would run for reelection. I love my job, I am getting things done, and I work hard," said Haney, 39, who first moved into the Tenderloin in 2007 and has continuously lived in the neighborhood in various places the past seven years. "There's a lot more to do."

"I ran because this district has challenges and problems. I am not going to deny there are challenges here," said Haney. "I wake up and fight every day to make progress. I put forward solutions, not just criticism. I think I have been effective."

Nonetheless, Haney is the third consecutive heterosexual person to represent District 6 since the supervisors reverted to being elected by district in 2000. Due to the district encompassing not only the Transgender District but also the Leather and LGBTQ Cultural District in the South of Market area, Cooper told the B.A.R. that she started thinking about running to be its representative at City Hall several years ago.

Friend Terri Lynn Haggins, a cisgender straight ally who is also living with HIV, first met Cooper more than three years ago through the group Women Organized to Respond to Life-Threatening Diseases, which is an AIDS Healthcare Foundation affiliate. They had talked about Cooper running for supervisor several years ago.

"She was really, she was concerned about the issues going on in the Tenderloin where she lived," recalled Haggins. "She would mention that and eventually she said, 'Maybe I should run for office.' We all looked at her as if to say, 'Yeah, sure, OK Ms. Billie.' She really took the time and thought about it."

Cooper considers Haggins to be part of her campaign kitchen cabinet, people she is turning to for advice. Haggins told the B.A.R. she has advised Cooper to do her research and listen to residents of the district.

"She needs to make sure she is aware of who she's going to be going against and learning about politics. Politics is a strange world," said Haggins. "My second advice was to pay close attention and listen carefully to the community, because that is where your strength is going to come from. And to listen more than talk."

Military service
Cooper, a Philadelphia native, joined the Navy in 1976 and was sent to boot camp in Florida then to bases in San Diego and Pearl Harbor, Hawaii. Joking she enlisted in order to find a husband, Cooper said she faced more issues due to her race than anything else.

"Back then in the 1970s it wasn't like when Bill Clinton signed 'Don't Ask, Don't Tell' into law. It was don't even tell us, we don't care," recalled Cooper. "It was right after Vietnam and they really needed people and really needed bodies. I was an able bodied, effeminate body."

Honorably discharged in May 1982, Cooper eventually relocated to San Francisco. She worked as a security guard then as a "glorified ticket taker" at the now-closed PussyCat Theater on Market Street. After 15 years employed as a janitor, Cooper went out on disability after getting hurt on the job.

Over the years she has been a sex worker and battled addictions to cocaine then crack. Diagnosed in 2002 with cancer, she lost her left eye to the disease on Thanksgiving in 2009. It is her wealth of life experiences, said Cooper, that gives her the confidence to now seek public office.

"I am standing up and going to not only show San Francisco but the world I am ready," said Cooper. "Even though you haven't given me the invitation to come to the table, I am ready to take a seat at the table."