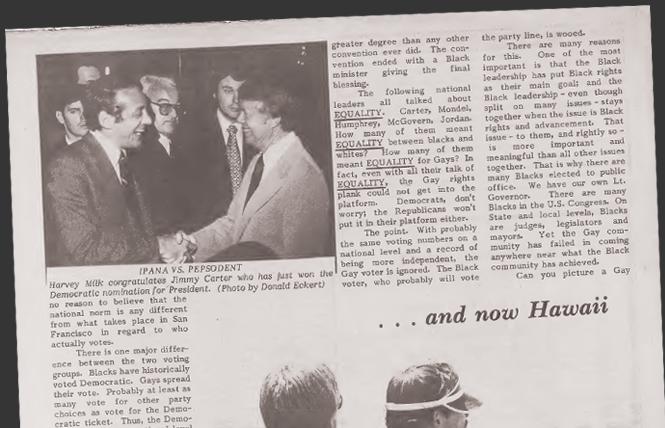 Over his four-year run as a political columnist for the Bay Area Reporter, Harvey Milk unabashedly took on local, state, and national politicians and San Francisco special interest groups. He also wasn't shy about lambasting his gay readers for their lack of involvement in politics or failure to vote on Election Day.

In all, he filed 102 Milk Forum columns under his byline between October 2, 1974 and November 22, 1978. Five days later Milk would be gunned down in his City Hall office by disgruntled former supervisor Dan White mere minutes after White killed then-mayor George Moscone.

An all-white jury would convict White of voluntary manslaughter rather than murder, buying into his defense that his bingeing on junk food led White to mentally snap at Moscone and Milk. It became known as the "Twinkie defense."

The two progressive leaders had objected to White's demand that he be reappointed to his supervisor seat after he had abruptly resigned from the board less than a year in office. The mayor had been expected to announce his pick for the board vacancy that Monday, November 27, 1978 when White sneaked into City Hall through a window so as to avoid the metal detectors at the entrance and assassinated his former colleagues.

Over the years Milk has become a global icon to the LGBTQ community and a figure now studied in California public schools. To honor Milk and his breaking through a pink political ceiling by being the first gay person elected to public office in both San Francisco and California with his 1977 supervisorial race win, state lawmakers declared May 22, Milk's birthday, as a day of special significance in the Golden State.

First celebrated 11 years ago, Harvey Milk Day will take place this Saturday on what would have been Milk's 91st birthday. A daylong celebration will be held in the Castro, the LGBTQ neighborhood where Milk lived and worked and which he represented at City Hall. (See the News Briefs for details.)

As the B.A.R. celebrates its 50th anniversary this year, the Political Notes column decided to return to some of Milk's columns he wrote. He became an official political columnist for the B.A.R. in its October 2, 1974 issue, though Milk had written several articles by then for the paper.

Among the issues Milk highlighted in his columns was a boycott against beer maker Coors in solidarity with unions trying to organize delivery drivers and labor leader Cesar Chavez's silence on gay rights, as was first highlighted by the Political Notes column in the May 22, 2008 issue of the B.A.R. on the occasion of the unveiling that day of the bronze sculpture of Milk situated at the top of the grand staircase in City Hall.

In the July 22, 1976 issue of the B.A.R, a famous photo of Milk shaking the hand of Jimmy Carter shortly after he had clinched the Democratic nomination for president at the Democratic National Convention in New York ran with Milk's column. Yet his encounter with Carter went unmentioned by Milk.

Rather, he zeroed in on the lack of support for gay rights by the Democratic Party, criticizing it for not adopting a gay rights plank in that year's party platform. He contrasted that decision with the widespread support by the convention delegates for issues championed by Black members of the party.

Hitting on an issue he would repeatedly turn to in his column, Milk beseeched his readers to mirror the groundwork laid by Black Democratic leaders and become more vocal in politics and, in particular, in the Democratic Party. He argued that the "gay vote" should be as coveted by party officials as that of the Black vote.

Milk wrote that gay people "must get involved. We must demand. We must not sell out, as so many have, for personal gains. The time has long since come when we must not be satisfied with a ride in the back of the bus."

Instead, gay voters (as back then the LGBTQ acronym was not in use) should be prepared to get off the bus, argued Milk, and walk their path alone.

"If we are ever to see the end of repression and discrimination, we have to start to use our votes for the rights of Gay people and not for the personal gains of a few individuals and their organizations," wrote Milk. "We must stop selling out our votes for crumbs when the pie does belong to all people and not just the non-gay community. We must learn from the Black movement."

His willingness to publicly criticize entrenched interests is clear in Milk's last column that ran in the B.A.R. It came after the defeat of the statewide anti-gay Briggs initiative, which would have banned gay and lesbians, and their straight allies, from being public school teachers in California.

Under the headline "The Chamber of Commerce," Milk ripped into the leadership of the San Francisco business association for not taking a public stand against Prop 6. In a blistering critique of the chamber's staying on the sidelines, Milk likened the group to those that remained silent about the Nazis' reign of terror in Germany during the 1940s or Joseph McCarthy's communist witch-hunt in the U.S. during the 1950s.

It would take several decades, but business groups eventually came around to the fact that LGBTQ people were an important part of their customer base and began to speak out publicly on various LGBTQ rights issues. Milk signaled 43 years ago that LGBTQ consumers would demand nothing less.

"Well, in case the Chamber has not noticed ... we are not going away, or back into out closets," he wrote. "In fact, we are going to take an even stronger part in our government and its decisions. In fact, we will become an even stronger political and economic force in the city, the state, and the nation."

Since 2018 all of Milk's columns have been accessible online due to a digitization project overseen by the GLBT Historical Society and funded by the Bob Ross Foundation, named after the B.A.R.'s founding publisher who died in 2003. The two online repositories of the old B.A.R. issues can be accessed via https://www.ebar.com/index.php?ch=1971-2005&screenID=18206

Web Extra: For more queer political news, be sure to check http://www.ebar.com Monday mornings for Political Notes, the notebook's online companion. This week's column reported on the special Progress pride flags San Francisco and its sister city Cork, Ireland flew for the 2021 International Day Against Homophobia, Transphobia and Biphobia.