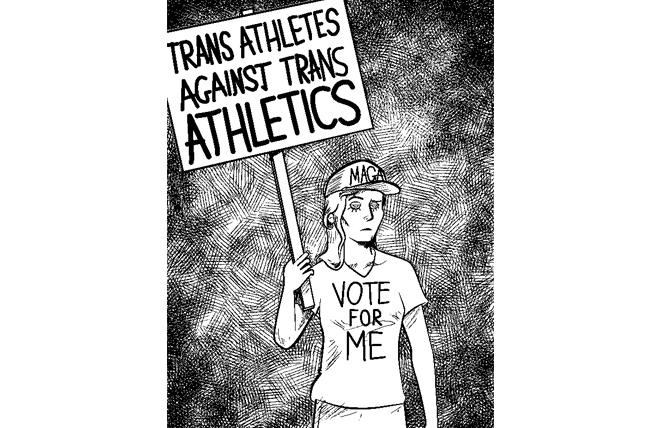 I really don't want to talk about Caitlyn Jenner. Rather, I find myself in the unenviable position of having to write about Jenner. As a transgender writer in 2021, it is largely unavoidable, and as such, I am resigned to this fate.

It's not that there aren't things about Jenner that aren't worth writing about. She will always be the 1970s-era Olympic hero/reality television celebrity who transitioned in the public eye. She is part of the glitz and glamour of the Kardashian family, and all that entails.

Likewise, my own personal reasons for not wanting to write about her are not because I don't see her as "legitimately transgender," whatever that means. Jenner is a transgender woman. She has transitioned. I'm not going to disparage her on the basis of her transition, or her birth gender, or any of that, and I urge you not to do so either.

I also am not envious of her. My feelings toward her have nothing to do with the gold she brought back from Montreal in 1976, nor her ability to make money off either that or her reality television lifestyle. I'm happy with my life, and don't much feel a need for the trappings of wealth and fame.

As it is, I wrote about Jenner before, as she came out in 2015 with a cover story in Vanity Fair, then later during the run of her two-season long "I Am Cait" reality show. Even then, however, I didn't much want to write about her.

Back then, I saw her as an extremely naive trans woman making all the mistakes newly out trans women tend to make. Unfortunately, given her celebrity status, everything she said or did was projected that much larger. She continued to act as if her life was not going to change, and she could enjoy all the prestige and privilege she'd grown accustomed to in the decades following her decathlon victory.

In some ways, she is right on that. She is insulated enough from the experiences of the majority of her trans siblings that she will likely never have to pay the dues a lot of us have in this life. This has allowed her to circumvent so many of the challenges transgender people face today, and has helped to form the Jenner we see today.

I had hoped, after the Vanity Fair coming out, and even more so as I saw her friends riding along with her on "I Am Cait" as they tried to drill sense and reality into her, that maybe she would learn. But it was I who was naive in thinking that she would grow and come to understand what the world is truly like. After she publicly admitted she was wrong about Donald Trump, I had hope that, perhaps now, she was finally starting to mature. At the very least, she seemed to be dropping back off the popular culture meter.

That all changed, however, with an equally bizarre move to recall California Gavin Newsom, as Jenner has thrown her hat into the ring as one of the candidates hoping to replace him. (State officials have determined that recall organizers submitted enough valid signatures to force a vote later this year, though an election date has not been set.) Jenner, a Republican, has cast herself as the Golden State's own Trump: a reality show businessperson with a big wallet, here to somehow "save" California with her supposed professional acumen and her sense of "winning."

Her candidacy so far, however, has been one gaffe after another, from lying that she golfed rather than voted in the 2020 presidential election to a "hangar side" chat with Sean Hannity where she talked about how her poor neighbor at the airport who is tired of having to see homeless people moved to Arizona to her basic misunderstanding of how district attorneys in the state are elected by county, not controlled by the governor. She is painfully unqualified for the job.

Perhaps her biggest blunder, however, was Jenner siding with far-right ideology on transgender students participating in sports, stating, "That's why I oppose biological boys who are trans competing in girls' sports in school. It just isn't fair. And we have to protect girls' sports in our schools" in what appeared to be a largely staged "ambush interview" by TMZ in a Malibu parking lot.

The statement, the phrasing of which comes straight out of the right-wing playbook, is a 180-degree reversal of comments she gave to Outsports.com managing editor Dawn Ennis in April 2020. "I think every trans person, if they're into athletics, should have an opportunity to compete and to improve themselves," she told Ennis. "I'm all for it."

Then again, she also told Ennis, "Politics is something I don't talk about any longer."

At last, we reach exactly why I don't want to write about Jenner.

Much like her Caitlyn for California website, she is devoid of any policy positions. She will take any stand she sees as advantageous, telling a transgender reporter what they want to hear, while cozying up to what the right wants to hear in an attempt at the governor's seat.

At the same time, Jenner has that Trumpian narcissism that requires her to be talked about. She needs it like I need air. Writing about her, even to criticize her, simply feeds her. It gives her the visibility she craves, and gives her a sense of relevance in a world that would much rather leave her on the golf course.

I know I will need to write about Jenner again someday. I may even still hold onto a shred of hope that she will learn from her mistakes.

Yet, at heart, I know that that day is unlikely to come while her ego remains in charge.

Gwen Smith was given a gold medal in 1976; it was made by the Mattel toy company. You can find her at www.gwensmith.com