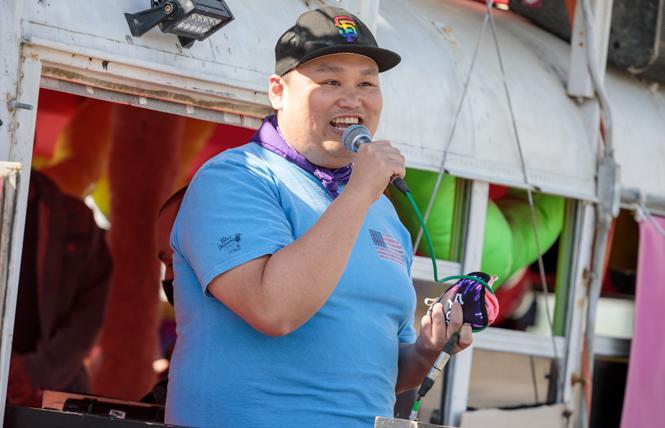 GAPA board chair Michael Trung Nguyen spoke at one of the rallies in the Castro to stand against API hate. Photo: Kevin Zhou

GAPA was founded in 1988 by a group of gay and bi Asian and Pacific Islander men who had been meeting as a rap group at the Pacific Center for Human Growth in Berkeley. At the time, the founders saw a need to build community with other queer APIs, shape a positive sense of queer API identity, and mobilize the community to increase our political power in a time darkened by the AIDS epidemic.

Now, over 33 years later, GAPA meets a national moment of racial reckoning, at an unprecedented time of awareness of the violence perpetrated against Asian Americans, by changing our name to GLBTQ+ Asian Pacific Alliance. This new name more fully reflects who we hold ourselves accountable to: the entire GLBTQ+ Asian and Pacific Islander community.

During the past five years of service as chair of the board of directors of GAPA, I have embarked on a personal journey of reflection and rebirth, discovering what GAPA stands for as a community-based organization in San Francisco. Our vision is a powerful queer and trans Asian and Pacific Islander community that is seen, heard, and celebrated.

To quote House Speaker Nancy Pelosi (D-San Francisco), who attended a GAPA banquet back when she first ran for Congress, "No one's going to give you power. You have to seize it." We intend to seize that power by mobilizing our QTAPI community through relational organizing. That all starts by taking an inclusive stance to say clearly and loudly who belongs in GAPA. We welcome our families and allies to unite through inclusion, advocacy, and love.

GAPA has been harnessing and seizing the power of creating spaces where our folks didn't feel traditionally included in the gay community. GAPA members have organized protests in the Castro against a double ID requirement at gay clubs, which had a disproportionate impact on the API community. GAPA created its own parties and gatherings to create spaces where our community felt safe. GAPA's Runway event started at one of these small parties and has grown into the largest and longest-running pageant for queer and trans Asian and Pacific Islanders.

Fast forward to 2021 where, after surviving a pandemic in which the past administration scapegoated and endangered Asians, we are seeing a huge spike in violence against Asian lives, weekly. Let's be clear: Asian lives are and have always been under attack since arriving in the 1800s. Trans lives continue to be under attack. Our friends and partners at API Equality of Northern California launched the first-ever TGNC API needs assessment in the Bay Area over two years, Up to Us, resulting in findings that half of the TGNC API community believe TGNC APIs cannot influence government decisions, that well-resourced spaces where TGNC APIs are seen and accepted are not luxury items but rather essential needs for survival, and that TGNC APIs remains in extreme danger, mentally, physically, and economically.

We desperately need more queer and trans Asian and Pacific Islander people to join, organize, mobilize, and inspire our community into action. We, at GAPA, empower our community through unity and visibility, through a lens of abundance, and with words of integrity. We implore all those in our community to join our family in building a home within GAPA. Please consider making your voice heard by joining us as a member at https://www.gapa.org/

We created an advisory board in 2020 to help us find ways to bring in more non-cis gay male-identifying folks into the organization. At the first meeting of the advisory board, members suggested changing the name of GAPA from Gay Asian Pacific Alliance to something more inclusive. After many conversations, GLBTQ+ Asian Pacific Alliance was unanimously approved as our new name by the board and the general membership.

It is our hope that with this new name comes even more visibility and community building. GAPA, along with the recently formed Bay Area QTAPI Coalition, is pushing to have May 22-29 declared the first-ever QTAPI Week in San Francisco, through a resolution by gay District 8 Supervisor Rafael Mandelman's office. It passed, as expected, May 18, meaning this will be the first time QTAPIs will be recognized for the contributions we have made to San Francisco. At the intersection of May, Asian and Pacific American Heritage Month, and June, LGBTQ Pride Month, the closing celebration of QTAPI Week is set for Saturday, May 29, from 11 a.m. to 5 p.m. in the Castro off 18th street behind Walgreens. We encourage all QTAPIs to join us and commit to making a difference in our society. Only then will we be able to #StopAsianHate. Let's show the world the power of QTAPI pride, joy, and celebration in the face of violence and darkness. We're all in this together.

Michael Trung Nguyen is the board chair of GLBTQ+ Asian Pacific Alliance.