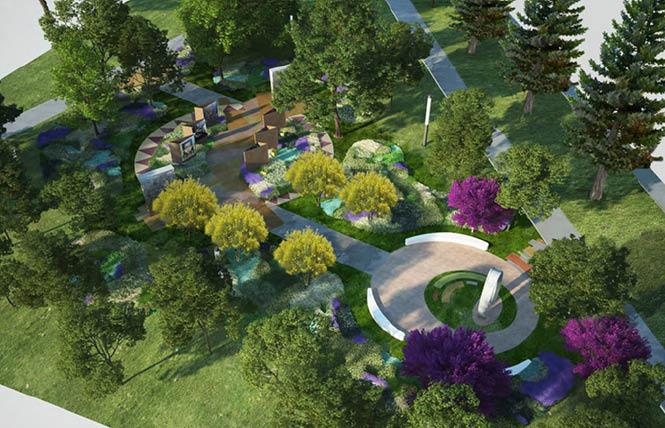 Seventeen years after it was first unveiled to the public, Los Angeles' AIDS monument is being spruced up. The $850,000 renovation project is bringing new trees and plantings, new walkways and state of the art LED lighting to the 10,000 square foot site in the city's Lincoln Park.

And the names of those people who have died due to AIDS from anywhere in the world can be submitted through mid-August to be engraved on the monument free of charge. There is a total capacity for 8,000 names, with less than 600 currently inscribed of not only American citizens but also residents of Mexico, Venezuela, and other countries.

Caretakers of the monument, which is officially known as The Wall Las Memorias AIDS Monument, expect another 500 names will be added to it this summer in time for the planned unveiling of the renovated installation in September.

"It really is going to look incredible," said Richard L. Zaldivar, the founder and executive director of The Wall Las Memorias Project, the nonprofit that formed in the 1990s to build the monument and provide HIV education and prevention to both LGBTQ and straight Latino residents of Los Angeles.

Originally designed by architect David Angelo and public artist Robin Brailsford, the monument is meant to evoke a Quetzalcoatl serpent, a symbol of rebirth for Aztecs. Six towering murals depict life with AIDS in the Latino community, while two other granite panels contain the names of the deceased.

The serene park setting is dotted with benches and sports a towering stainless steel archway. Met with some anti-gay opposition when first proposed, the local community over the years has embraced the monument. Newly wed couples pose for photos within its pastoral spaces, and Asian seniors practice tai chi there in the mornings.

"The community has come around to support the project, and the homophobia is not as prevalent as it was back then," recalled Zaldivar, 68, who described himself as a "gay, Latino, Catholic, Democratic Dodgers fan" during a recent phone interview with the Bay Area Reporter to discuss the renovation of the monument.

Sparked conversations
The project sparked conversations within the local Latino community about human sexuality, homophobia, HIV, AIDS and other issues that were not often talked about, noted Zaldivar, a native of Los Angeles whose parents met in Lincoln Heights, the community near the city park that houses the AIDS monument.

"The purpose of building the monument was not only to remember people who passed away from AIDS. It was also a process that allowed a community to become aware, acknowledgeable and accept responsibility that they have to address HIV and AIDS in their community," he said. "The Latino and Hispanic community is much different than the white community in the ways we deal with different cultural characteristics that become challenging for us."

Like much of everything during the COVID pandemic, the renovation project was upended by the health crisis. It was initially to be completed last fall, but just as construction was set to begin last March, a statewide shutdown imposed to halt the spread of the coronavirus torpedoed the initial work schedule.

The nonprofit shut down its offices when it sent its staffers home to work remotely and moved all of its programs online. Shipping issues delayed the arrival of different products needed for the renovation, such as colored pavers for the new walkways, plus a number of the construction crew became sick with COVID-19.

"It has been a project. This is the second time we are working on this, and it is always a challenge," said Zaldivar of the various logistical issues that the nonprofit had to deal with to ensure the renovation project came to fruition.

Funded by both the city and county of Los Angeles, construction is now more than 75% complete. New plantings are ready to be put into the ground in the coming weeks. The monument will sport new Crape Myrte and Desert Museum Palo Verde trees, as well as new shrub varietals including Blue Glow Agave, Rosenka Bougainvillea, Pink Indian Hawthorne, Blue Chalk Sticks, and Bright Edge Yucca.

One issue that has occurred over the years, and became a problem over the last 12 months with the monument fenced off to the public, is people stealing copper panels that are part of the murals. Crews have worked on securing them in place so they are harder to remove.

"It should be entirely completed by May 1," said Zaldivar, who has been working with the city's recreation and park department on holding the dedication ceremony for the renovated monument in the fall. "We are looking at a Saturday night dedication in mid-September. We are looking at some kind of festival that entire weekend in the park."

Should the COVID pandemic still be an issue then Zaldivar said the agency's Plan B is "we would do a combination of an in-person dedication with limited seating and we would also stream it on virtual platforms."

Agency grew to address health crisis
Zaldivar lives in downtown Los Angeles not far from the nonprofit's offices, which it moved into in 2018. The 35-person staff, 10 of whom were brought on during the pandemic, returned to the location in November on a rotating basis to limit the number of people working there at a given time. In recent weeks, all of the employees have received a COVID vaccine.

"Some folks in the offices are now doing HIV testing," said Zaldivar, noting they resumed doing so in December on an appointment basis.

Unlike other nonprofits that have had a rocky time weathering the health crisis, The Wall Las Memorias has expanded its programming and staffing in order to address the community's needs during the pandemic. Its budget grew from $2.1 million in 2020 to $2.5 million in 2021.

It held a number of virtual town halls for community members and connected people with mental health counselors, which has also been made available to the staff since last March. The agency has been virtually providing COVID-19 prevention education to the local community. It plans to soon start hitting the streets and doing outreach in-person to the community.

"I think Los Angeles has suffered tremendously, and people of color communities have suffered the most," said Zaldivar. "We are doing the best we can and staying focused. It is easy not to stay focused during this pandemic."

The lack of data on how widespread COVID has been within the LGBTQ community has been problematic, noted Zaldivar. Nor is it clear how many have gotten vaccinated or are concerned about being inoculated for the virus.

"Many from our community who are LGBTQ live with their families, so we do know if a lot of families have become infected," he said. "That is why it is really important an LGBTQ organization like ours is in the community educating them about COVID and getting them into testing. And the second piece of that is getting them vaccinated."

Zaldivar sees his organization as working in tandem with other nonprofits like the Los Angeles LGBT Center. While it is largely focused on providing services to LGBTQ people, The Wall Las Memorias serves a Latino clientele that is 50% heterosexual. And some of its LGBTQ clients may not be comfortable going to nonprofit that isn't solely focused on the Latino community, he noted.

"It is important we have a cultural lens, and that the people not only on staff but in leadership and on our board reflects that community," said Zaldivar.

Over the years the agency has built ties to the local religious community. For 15 years it oversaw a program called Project Faith and outreached to 1,000 Latino churches in Los Angeles County to encourage them to address the AIDS epidemic.

"We are a spiritual based organization also. We look at things through a spiritual lens," said Zaldivar.

Thus, last week, the agency issued a statement in response to the news that the Catholic Church would not recognize same-sex marriages. In it Zaldivar asked "for prayer for the justice of all humanity, as we are all children of God" during this time of Lent for adherents of the faith.

"As a gay Latino community leader, and a practicing Catholic that attends Sunday mass weekly with my partner, today's statement from the Vatican is tremendously disappointing and of grave concern to me. I would expect this from the bureaucracy of the Vatican, but I am disappointed that Pope Francis accepted this report from the Congregation for the Doctrine of the Faith," stated Zaldivar. "I know that it will take some time for the Catholic Church to accept same-sex unions, but this statement allows for too much time. What I fear most from this report is that it gives ammunition to the conservative bishops and priests to discriminate and dehumanize members of my community."

He reminded his fellow Catholics that Jesus "faced bigotry and hatred, resulting in his own death. His life and his death taught me much about social justice, and we must commit to change the institutions that are archaic in their beliefs."

To learn more about the AIDS monument and the programs The Wall Las Memorias Project offers, visit its website.