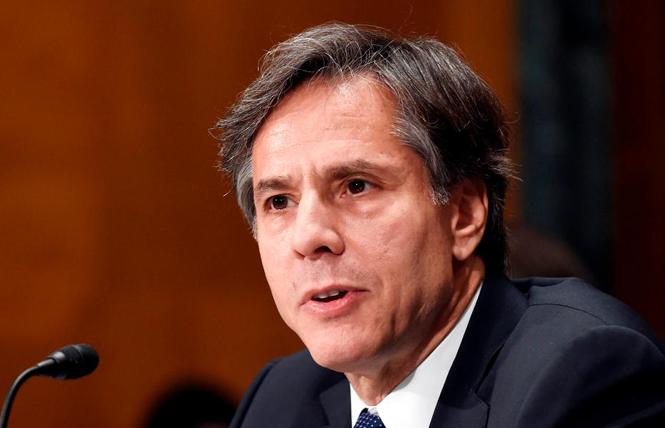 Blinken, 58, responded with affirmative responses to Senator Edward Markey's (D-Massachusetts) questions, signaling a U-turn for U.S. foreign policy as the country's global representative during his hearing.

Blinken was direct and clear in his goals to fill the vacant Special Envoy for the Human Rights of LGBTI Persons position and elevate it to an ambassador role, repudiate the Commission on Unalienable Rights, and allow embassies to again fly the rainbow flag during Pride Month.

Former Secretary of State Mike Pompeo created the aforementioned commission, which was stacked with anti-gay conservatives, in 2019. He took the commission's revised definition of human rights to the United Nations General Assembly week last September.

Blinken agreed with Markey that a "speedy" installment of a new LGBTQ expert was "absolutely" a priority with the goal of turning it into an ambassador position.

"This is a matter of some real urgency," Blinken responded. "We've seen violence directed against LGBT people around the world increase."

The career diplomat, reaffirming the department's commitment to protecting LGBTQ rights globally during his hearing, noted the high murder rate of transgender people, particularly transgender women of color, in 2020.

Blinken served as deputy secretary of state from 2015-2017, among other key roles during former President Barack Obama's administration.

He stated that the U.S.'s role should be "standing up for and defend the rights of LGBTQI people."

"[It] is something the department is going to take on and take on immediately," he said.

"Antony Blinken will ensure the rights of all LGBTQ people, from every background, are once again a top priority in America's foreign policy — and that when LGBTQ people abroad are under threat, they can count on the State Department as an ally," the Human Rights campaign tweeted.

Beyond praise, LGBTQ global advocates were quick to seize the opportunity to push beyond progress made on queer rights globally during the Obama era now that Joe Biden is president.

In an op-ed in the Advocate, LGBTQ global experts Julie Dorf and Dominic Bocci laid out what they believe would repair the U.S.'s reputation as a global leader for LGBTQ rights in the wake of former President Donald Trump's administration.

Dorf is the senior adviser with the Council for Global Equality. Bocci is the deputy director at the Council on Foreign Relations.

The experts stated eight ways the new administration could reestablish credibility among its allies, using LGBTQ rights as a cornerstone of its foreign policy again. Citing the successful blueprint coupled with "specific action" established by the Obama administration, they wrote, was a way to "build back bolder."

The advocates called for U.S. resettlement of LGBTQ refugees and asylum seekers and the adjustment of U.S. passports to reflect nonbinary identification as key signals demonstrating recognition of queer people's dignity.

They called for a huge increase in humanitarian aid paired with clear equality and non-discrimination mandates in line with American values and to include LGBTQ communities in the administration's COVID-19 relief efforts.

The advocates also called for the U.S. to appoint lesbian and transgender diplomats.

It appears Blinken is interested in reestablishing the U.S.'s position championing LGBTQ rights around the world and human rights, he told senators during his confirmation hearing.

"American leadership still matters," Blinken said. "The reality is, the world simply does not organize itself. When we're not engaged, when we're not leading, then one of two things is likely to happen: Either some other country tries to take our place, but not in a way that's likely to advance our interests and values, or maybe just as bad, no one does and then you have chaos. Either way that does not serve the American people."

The imagemakers displayed five to eight of their works along with one video piece by Mac Tsang, eight drawings, two photos, and extractions from interviews by Fung Ming Sum and Nelson Tang Chak-man's zine and projected images in addition to his photography display. The exhibit explores a variety of subjects from Hong Kong's demonstration to same-sex marriage to cruising to gender perception and expression, and queering the everyday to queer utopian film, and more through the images, said Ka-Man Tse, who curated the exhibit.

There are about 65 unique pieces, not including more than 80 images in projection and on zine respectively, currently on display at the WMA Space in central Hong Kong. Some of the works can also be viewed digitally on the catalogue.

The emerging imagemakers gathered for their first workshop June 29, 2019 amid the backdrop of Hong Kong's 2 million-strong march the weekend before and the 50th anniversary of the Stonewall riots in New York City, considered by many to be the birth of the modern LGBTQ rights movement.

Artist and educator Ka-Man Tse guided the emerging imagemakers in the 19-month long workshops that led to the exhibition.

Hong Kong has been a special administrative region of the People's Republic of China since 1997 when the British handed over the former colony and formed the "one country, two systems."

However, through three decades, Hong Kongers have accused Beijing of overstepping its authority.

Queer dissent
The Umbrella Movement, Hong Kong's pro-democracy coalition, pushed back with a series of protests starting in 2014.

Violent protest erupted in part over Beijing's proposed law that would allow extradition of suspected criminals to be tried in mainland China. The bill was eventually withdrawn.

The movement has been queered from its beginnings, supported by popular queer Hong Kong Cantopop singers Anthony Wong Yiu-ming and Denise Ho.

Ho and Yiu-ming's participation in the movement was depicted in last summer's documentary, "Denise Ho — Becoming The Song."

The young imagemakers gathered for their first workshop June 29, 2019 amid the backdrop of Hong Kong's 2 million-strong march the weekend before and the 50th anniversary of the Stonewall riots in New York City, considered by many to be the birth of the modern LGBTQ rights movement.

The participants took part in workshops by artist and educator Ka-Man Tse.

The project was supported by the Hong Kong International Photo Festival.

It is the first time the festival supported a project focused on LGBTQ rights, Stella Tsui, festival project manager, wrote in an email to the Bay Area Reporter.

Prior to the global COVID-19 pandemic, Ka-Man Tse traveled regularly two to three times a year, between New York, where she teaches at Parson School of Design, and Hong Kong.

"It is the culmination of a long journey, in which Hong Kongers have experienced a lot of hardship, political and economic turmoil and loss, and in which the world has grinded to a halt due to a global pandemic," Ka-Man Tse wrote in an email to the B.A.R., adding the pandemic made teaching and curating the show through time zones challenging.

"We had to make certain choices to protect people in the pictures, and some of our artists," she wrote. "It is an ethics of care and do no harm."

Pride
Despite the challenges, Ka-Man Tse wrote she is proud of her Hong Kong participants and their work that is now on display.

The moment and the events of the ensuing year and a half were not lost on the photographers.

Ka-Man Tse told the South China Morning Post the images captured parallel aspects of the LGBTQ experience and the protesters. She pointed out the images that her participants are showing depict police profiling, disguises, and coded self-expression in the name of defiance, solidarity, and the experience of being profiled.

Student journalist Nelson Tang Chak-man's photograph of a protester reaching for the hand of someone who appears to be in drag symbolizes the solidarity between queers and demonstrators.

Nelson Tang Chak-man, a 22-year-old gender-fluid gay person who uses he/him pronouns, was seriously injured and arrested while covering the protests. He was charged with resisting arrest, reported SCMP. He is currently out on bail.

His initial vision for the project was focused more on fine art. He wanted to create "male portraits from my fantasy," he wrote to the B.A.R., but as the protests continued, "I focused on responding to the political transition in Hong Kong, it being a part of my daily life."

"Documenting protests is similar to documenting LGBTQ+ events. I need to consider masked faces in both situations; I need to deal with the tension between the ideal and reality in both situations," wrote Nelson Tang Chak-man, who took more than 30,000 photos between the summer 2019 and 2020. "I would think about my dating life when I covered the LGBTQ+ events. I would dream about getting married with my love when I covered the protests which were violent on many occasions."

Nelson Tang Chak-man had to make difficult decisions about what to display for the exhibit to protect his subjects, he wrote.

"I had to consider more carefully, as the consequences are now more serious than that of coming out," he wrote. "It could lead to someone being arrested and jailed. And not only does that apply to the sitters in the photos, but potentially to me as the photographer, or to an even wider extent the personnel and organizations that I work with."

Other photographers, such as WY Kwan's photo, "P.S. It's an Emergency — Dancer" (2019-20), also documented the demonstrations.

Kwan's photo staged a protest scene against the emergency law. The law banned face masks at public assemblies. The young protesters in the photo still found ways to avoid the camera capturing their faces.

"A show opening now, in 2021, announces that there is possibility. Nevertheless — and that queer art, queer sensibility, queer aesthetics and queer artists — we are not going anywhere. Queer artists agitate, dissent, repurpose, reframe, offer new ways of seeing and thinking — it is what we need right now," wrote Ka-Man Tse.

"There is something to be said about giving an emerging artist time and space to develop a project, and what comes out of that, to trust the work and to listen to where it will lead you," added Ka-Man Tse. "Even if there are detours and struggles at the outset (which there always will be), that the solving through the making is key."

LGBTQ Hong Kongers have won some rights through court actions within recent years along with gaining support of global companies. However, China, which has clamped down on LGBTQ rights on the mainland, is also stripping away fundamental human rights for all Hong Kongers, not just the island's LGBTQ community.

Corporations working to protect LGBTQ rights and international queer events, like Gay Games 11, which Hong Kong is hosting in 2022, will have to grapple with the question of eroding human rights in an ongoing shifting situation.

To check out the "Unruly Visions" event page, visit https://hkipf.org.hk/events/unruly-visions

To view a video of Ka-man Tse, go to https://drive.google.com/file/d/1nKss2Tvo7n5jq2T2hMM6iYRM_E7v6mu2/view

Billed as "the first magazine dedicated to queer and gay fine art photography," it features photographers from around the world in its pages, reported Attitude magazine.

Boys! Boys! Boys! represents more than 60 photographers from 25 countries, including China, India, Iran, Poland, Russia, and Turkey where gay and queer rights are repressed and constantly under threat, according to its website.

The United Kingdom-based photography organization co-founded by Ghislain Pascal is a project of The Little Black Gallery. The organization celebrates queer and gay male photography through online auctions, exhibitions, books, and a digital platform.

The magazine costs $30, not including shipping. A dollar from every sale is donated to support the LGBTQ community and the fight against HIV/AIDS.