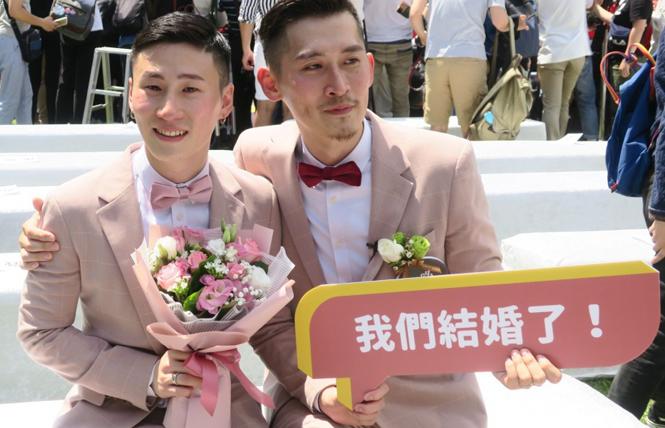 Chinese partners of Taiwanese citizens will be excluded from the change, according to a report in Focus Taiwan.

The law will recognize a partner from Hong Kong or Macau.

Some binational same-sex couples' weddings and marriages that were held overseas were not legally recognized when Taiwan became the first Asian country to legalize same-sex marriage in 2019.

The law only recognized Taiwanese binational same-sex marriages of partners who were citizens of one of the 29 countries where marriage equality is legal.

That may soon change. Last week, the Judicial Yuan announced in a news release that it approved draft revisions to Article 46 of the Act Governing the Choice of Law in Civil Matters Involving Foreign Elements, which barred those marriages, reported Focus Taiwan.

If passed, the revised draft law will open same-sex marriage to all couples in Taiwan, with the exception of Chinese citizens.

China and Taiwan have separate laws governing Taiwan-China relations due to each state claiming to be the rightful government of both mainland China and the island of Taiwan.

Hong Kong and Macau fall under a different jurisdiction. Hong Kong is a special administrative region of the People's Republic of China. Macau is an autonomous state of China.

The draft revisions were sent to the Executive Yuan for review before being jointly submitted to Taiwan's Legislature for consideration.

He also called for Malaysians to turn in suspected LGBTQ people.

Marzuk told reporters January 19 that his ministry has instructed all state religious agencies and enforcers to take action against LGBTQ people who "do not behave accordingly," reported the ASEAN Post Team. "By doing this, the government hopes it would prevent them from committing more offenses."

"Communities, including parents, need to be aware of the behavior of their children and stakeholders in education need to be vigilant and make a common agenda for us to prevent," Marzuk said, according to the International Business Times.

Malaysian government, religious institutions, and media have targeted LGBTQ people through sponsored programs and other activities that have contributed to societal discrimination and increased severity of anti-gay attacks, according to human rights advocates. The country's leaders have waged a decade-long assault on its queer community, advocates noted.

Grace Poore, OutRight Action International's Asia-Pacific program coordinator, told NBC News that the Malaysian government has a history that has contributed to the negative portrayal of LGBTQ people.

"The Malaysian government is not only complicit with religious conservative groups in portraying LGBT Malaysians as deviant, diseased, and dangerous to religion and culture, but since 2011, the government has sponsored and funded public education programs that single out LGBT people," Poore said.

Malaysian LGBTQ activists told HRW that prior to 2018, courts never carried out caning sentences for same-sex relationships. That changed when two women were accused of attempting to have sex with each other. The following year five men were fined, imprisoned, and caned.

In addition to the anti-gay law, there is an anti-crossdressing law that targets transgender people.

States have separate Sharia laws and courts that are only for Muslims and are enforced by state Islamic Religious Departments, according to Human Rights Watch.

Currently, Sharia courts can sentence LGBTQ people to three years in prison and fine them $1,200 (RM5,000). That can be accompanied by up to six whippings, according to Act 355, adopted in 1965. The law was amended in 1984 and the punishment was increased to the current sentence.

Marzuk wants to increase it on top of Malaysia's federal law, which currently criminalizes homosexuality and gender nonconformity in all 13 states and the federal territory.

An estimated 60% of Malaysia's population is Muslim.

Criticism and denouncement
Marzuk's call for a crackdown on LGBTQs was met with criticism by local and international human rights organizations.

Alarmed by the Malaysian government seemingly "sinking even deeper in its disregard for human rights," HRW associate LGBTQ rights director Neela Ghoshal called upon it to denounce Marzuk in the organization's January 25 release.

Ghoshal called Malaysia's state and federal statutes that criminalize LGBTQ people "already out of bounds with regard to international law."

"Rather than enhancing penalties for actions that harm no one, the government should repeal such penalties," she continued.

Salim Bashir, president of the Malaysian Bar, stated the LGBTQ community deserved to be treated equally and with respect, without the fear of being harassed or threatened, reported the ASEAN Post Team.

Salim expressed concern about "heightened discrimination toward the LGBT community," saying that "harsher punishments through legislative amendments is not a solution."

The court ruled January 19 that Romania was without a "clear and foreseeable legal framework for the legal gender recognition" in the cases of X and Y v. Romania, violating Article 8 of the European Convention.

Trans organizations were pleased with the development.

"Transgender people in Romania are very excited about the news from the European Court of Human Rights. We have been waiting for a long time to hear this, particularly those at the margins," Antonella Lerca, member of the Transgender Europe's board, who welcomed the judgment, said in a joint statement from the International Lesbian, Gay, Bisexual, Trans and Intersex Association-Europe and Transgender Europe following the court's decision.

The organizations' joint third-party intervention submitted to the court informed the judgment in the cases.

"We call upon the Romanian state to respect its obligations and immediately introduce a legal gender recognition procedure that is quick, transparent, and accessible and based on self-determination," she added.

Romania was also found to be in violation of recommendations by the Committee of Ministers and the Parliamentary Assembly of the Council of Europe, as well as the United Nations High Commissioner for Human Rights and the U.N. Independent Expert on SOGI Victor Madrigal-Borloz.

The applicants, only identified as Mr. X and Mr. Y, attempted to have their documents legally changed from female to male in the civil-status register to identify in their gender, but they were repeatedly denied by the register and courts.

The plaintiffs spent years in Romanian courts fighting to legally change their documents without having to provide proof of gender reassignment surgery, which the register and courts required, according to ILGA-Europe and TGEU's statement.

Mr. X and Mr. Y continued to suffer from the indignities of not having their identification cards match how they presented themselves as their case made its way through the courts.

In 2015, Mr. X obtained a male forename by deed poll in the United Kingdom. That did not relieve him of his situation upon subsequent trips to Romania, where authorities questioned his U.K. documents against his Romanian documents.

Mr. Y was compelled to undergo various surgeries to change his civil-status records and have a new birth certificate issued.

The court observed the "impossible dilemma" the Romanian courts offered the applicants due to the lack of procedure and unreasonable requirements.

The applicants were forced to either undergo surgery or give up being recognized in their chosen gender identity. This violated their right to respect for their physical integrity and respect for private life, the court recognized.

Additionally, the court found that Romania failed to provide a fair balance between the general interest and the individual interests in Mr. X and Mr. Y's cases.

The advocates expressed disappointment that the court did not address Article 14's non-discrimination claims based on gender identity or clearly condemn surgery requirements in legal gender recognition procedures as discriminatory.

"Putting trans people in a dilemma of choosing between having their physical integrity respected or having their gender identity recognized is unacceptable," Arpi Aveistyan, head of Litigation at ILGA-Europe, said in the statement.

She called for Romania to establish a clear pathway to legal gender recognition.

ACCEPT, the country's LGBTQ organization, estimates there are around 120,000 transgender Romanians but estimates that less than 50 have legally changed their civil status documents in the last 20 years.

"It is time that countries across Europe set in place legal gender recognition procedures in line with international human rights standards," Aveistyan said.

Ukraine publishes first-ever transgender census
An estimated 8,200 transgender Ukrainians currently reside in the Eastern European country, according to the first-ever census of transgender men and women and intersex people.

The 40-page report, "Population size estimation for transgender people in Ukraine," was conducted in 2020 and published January 25.

The study's researchers believe the population could be between 3,400 and 14,000, but conservatively counted it at 8,200 for the report, according to the introduction.

The census did not include territories illegally occupied by the Russian Federation.

The transgender and intersex census is believed to be the first of its kind, not only in the Ukraine, but also in Central Asia and Eastern Europe, wrote Inna Iryskina, who announced the survey's release in an email posted on the Trans-Info-Europe listserv.

Iryskina is the coordinator of transgender program at Insight NGO based in Kyiv. She was one of the community experts who worked with the Eurasian Coalition on Health, Rights, Gender and Sexual Diversity, which provided methodological support, and 14 LGBTQ community experts.

The Center of Social Expertises conducted the survey at the request of the Public Health Center of the Ukraine Ministry of Health.

The study's purpose is to serve as a baseline for future studies, researchers wrote in the introduction, noting they face data gathering challenges from the lack of some governmental support, weak monitoring and evaluation systems at non-governmental organizations, and weak network connectivity within the transgender community that impacted the results.

The census results are based on empirical data from an integrated bio-behavioral study among transgender women and men and nonbinary individuals conducted in seven cities in 2020. A total of 32 semi-structured interviews with transgender activists, HIV-service NGO staff and medical institutions serving transgender people were conducted August 10-28.