Out in the World: Museveni reelected in Uganda after violent, anti-gay fueled campaign 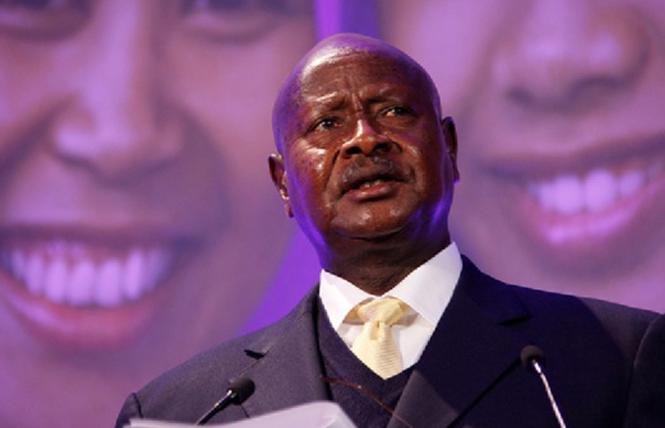 Ugandan President Yoweri Museveni sailed to a sixth consecutive term January 14, following a campaign that ramped up anti-gay rhetoric and was marred by violence against the opposition party.

Uganda's election season was the most politically violent in decades, according to experts.

Leading up to the presidential election, more than 50 opposition supporters were killed during suppression of rallies. Opposition leaders and campaign staff were intimidated and arrested by Uganda's security forces. The country's internet was shut down.

Amanpour quoted an unidentified leader of one of Uganda's leading LGBTQ rights organizations, "It's actually a really scary and rough time. LGBT people are fearful to even vote as there is a risk they will [be] targeted at the polling stations ... due to all the hate speeches."

Museveni denied that LGBTQ Ugandans were persecuted or killed.

Instead, he blamed western influences for promoting homosexuality in Uganda, telling Amanpour that the country had a problem of "social imperialism."

"We don't promote and flaunt homosexuality as if it is an alternative way of life," Museveni said.

Wine, who is straight and married to a woman, denied the rumors. Insulted, he criticized the attack, stating Museveni did not "have anything else to tell Ugandans."

Homosexuality is illegal in Uganda. If caught and convicted, individuals face life imprisonment.

Violence against Uganda's LGBTQ community between 2014 and 2018 had waned a bit, but in 2019 anti-gay rhetoric and attacks against the community spiked. Threats of reviving the so-called Kill the Gays bill returned.

The infamous bill was first proposed to Uganda's parliament in 2009. Five years later, in 2014, it was watered down to life imprisonment and briefly became law. Later that same year, the country's constitutional court struck it down based on a technicality. Since then, attempts to revive the bill have failed.

Simon Lokodo, who led raids on LGBTQ gatherings, jailed suspected gay Ugandans and supported the bill and its revival, lost his seat as Uganda's minister for ethics and integrity minister.

Lokodo was defeated by Baatom Ben Koryang, a candidate from his own party, the National Resistance Movement, in the September 2020 primary.

Wine was not the perfect LGBTQ-allied candidate. Britain denied him a visa in 2014 for homophobic slurs in his songs.

During his presidential bid, Wine changed his tune, responding to media questions about LGBTQ rights in Uganda with blanket statements that he would respect all Ugandans and promote tolerance, reported Reuters.

The United Nations and the United States raised concerns about the violence and anti-gay rhetoric tactics Museveni used leading up to the election.

"Using offensive language that describes LGBT+ people as 'deviant' is simply wrong," Byanyima said in a January 12 statement from the agency.

Responding to Museveni's TV interview, Byanyima said that she feared increased vilification could worsen violence against the community and reduce access to HIV/AIDS treatment.

In a January 16 statement, following the announcement of Museveni's reelection, the U.S. State Department condemned the intimidation and fear, violence, and election irregularities, along with the continued attacks on political candidates and civil society.

The department did not mention Museveni's direct attacks targeted at Ugandan LGBTQ people during the election campaign.

The department called for an investigation and accountability.

"We are deeply troubled by the many credible reports of security force violence during the pre-election period and election irregularities during the polls," said department spokesperson Morgan Ortagus in the statement.

Uganda relies heavily on the U.S. for financial support. The country ranks as the 25th poorest nation in the world out of 191 and receives a total assistance package exceeding $970 million a year, according to the department's December 19, 2019 report.

According to the CIA World Factbook, Uganda's economic growth has slowed since 2016 while government spending and public debt has increased.

Museveni denied the country's poverty status, claiming it was a middle-income country, and downplayed U.S. economic support when Amanpour pressed him about young people's calls for jobs in the country.

Many LGBTQ Ugandans called for change by participating in the vote and marking their ballots for Wine.

Biden, who announced the nomination January 13, called Power a "world-renowned voice of conscience and moral clarity," stating she would challenge and rally the international community to "stand up for the dignity and humanity of all people," in a statement released by his transition team.

"I know firsthand the unparalleled knowledge and tireless commitment to principled American engagement she brings to the table, and her expertise and perspective will be essential as our country reasserts its role as a leader on the world stage," Biden stated.

She co-hosted the U.N. Security Council's first-ever hearing on LGBTQ rights in 2015 that featured a gay Syrian and gay Iraqi telling their experiences at the height of the Islamic State of Iraq and the Levant.

At the time, ISIS militants circulated photos and videos of brutal murders of alleged gay men being beheaded, executed, thrown off of buildings, and stoned to death by mobs on the internet.

Another achievement was her backing the U.N.'s appointment of the independent special SOGI expert position.

Power's nomination to UNAID is a part of Biden's plan to put the U.S. back on track to lead LGBTQ rights globally.

Biden added Power "will be a powerful force for lifting up the vulnerable, ushering in a new era of human progress and development, and advancing American interests globally."

Power posted on Twitter that she was honored to be nominated.

"At this critical moment, I feel immensely fortunate to have the chance to serve again, working with the incredible USAID team to confront COVID-19, climate change, humanitarian crises and more," Power tweeted.

Power currently is director of the new International Peace and Security Project at Harvard.

Pink News reported that the Constitutional Court considered the amendment in relation to the case of a registered same-sex couple, a Czech and a Trinbagonian citizen living in the U.S.

The couple, who live in New Jersey, had concerns about traveling with their family in the Czech Republic.

Another couple, Jindra Vackar, a Czech citizen, and his French husband, Franck Marchis, had similar concerns a few years ago and ran into complications crossing borders in the European Union and Czech Republic and being questioned. That is why the San Francisco family fought for Czech parental recognition and dual citizenship for their adopted 10-year-old fraternal twin boys.

They won their case in a lower court, but it did not set precedent for other same-sex families living abroad with children to gain parental recognition on official documents, like birth certificates, and dual citizenship in the Czech Republic.

At the time, the judge in the southern Moravian region found the adoption did not go against the republic's public policy.

A year later, a Los Angeles-based gay couple, Jirka Ambroz, a Czech citizen, and Rasmus Dixen Ambroz, originally from Denmark, won their case at the Constitutional Court of the Czech Republic to be recognized as their children's fathers and gain dual Czech and U.S. citizenship.

A N.J. court approved the couple's adoption of the children.

Until the laws are changed, same-sex partners remain banned from adopting in the Central European country. Czech law only allows married straight couples to adopt. Same-sex marriage has not been legalized.

Filip Milde from the We Are Fair group, the Czech same-sex marriage campaign, told Expats.cz that without marriage equality "rainbow" couples and families with children suffer and are degraded as second-class citizens every day.

We are Fair is the Czech LGBTQ advocacy group behind the #CzechMarriageEquality campaign launched in 2016. Same-sex marriage and adoption have gained support in the republic even as a conservative wave has washed over some other countries, like Hungary and Poland.

Recently, a new Median agency survey shows two-thirds of Czechs believe same-sex couples should be allowed to marry (67%) and adopt (62%).

Median researchers polled more than 1,000 people over the age of 18 from all over the Czech Republic.