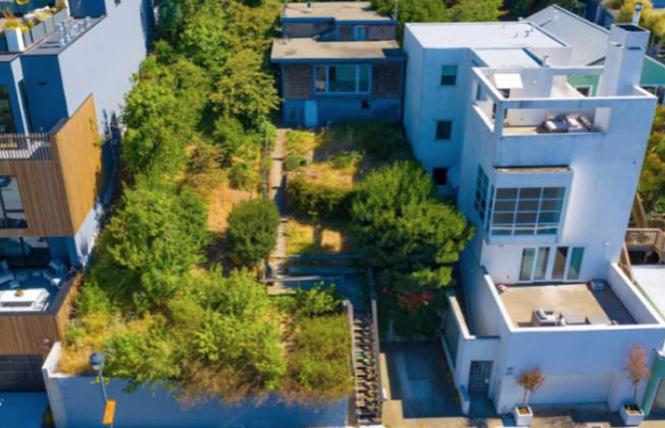 Hearings on requests from supervisors to landmark two LGBTQ historic sites in San Francisco are expected to take place in the coming weeks. If approved for listing, they would bring the number of properties in the city granted local landmark status specifically for their ties to LGBTQ history to six.

At its February 17 meeting the city's Historic Preservation Commission is scheduled to vote on landmarking the home where the late lesbian pioneering couple Phyllis Lyon and Del Martin lived throughout most of their 54 years together. Gay District 8 Supervisor Rafael Mandelman authored the resolution unanimously supported by the Board of Supervisors to begin the landmark process for the property at 651 Duncan Street.

The supervisors would need to vote a second time on declaring the site a city landmark. A survey of San Francisco's LGBTQ cultural heritage released in 2015 had called on city officials to designate the Lyon-Martin House a historic site.

District 6 Supervisor Matt Haney is seeking a similar process in order to declare the Eagle Bar, a gay-owned bar located South of Market in the Leather and LGBTQ Cultural District, a city landmark. The supervisors' land use and transportation committee could take it up as soon as next Monday, January 25.

The Board of Supervisors would then need to vote in support of starting the landmark process. Should it do so, the historic preservation commission would have 90 days to take up the matter and send it back to the supervisors for a final vote on designating the entertainment venue at 398 12th Street historically important.

As the Bay Area Reporter first reported in December, Haney decided to seek landmark status for the Eagle following the sale of the property in September to Robert G. Scypinski, according to property records. Attempts to contact Scypinski have gone unreturned, and he has yet to reach out to Haney's office regarding the landmark request.

Mandelman was also prompted into action following the sale of the Lyon-Martin House last summer several months after Lyon's death in April at the age of 95. Martin died in 2008 at the age of 87 weeks after the women were the first same-sex couple to legally marry in California that June.

Their 5,700 square foot Noe Valley property sold for $2.25 million and sits atop a steep hill. The parcel includes the couple's two-story cottage and an undeveloped area the women had tended as a garden.

Owners plan rehab of historic home
With its views of the city's skyline, the property is a prime location for a larger development. According to emails obtained by the B.A.R., the owners Paul McKeown and his wife, Meredith Jones-McKeown, intend to construct a single-family residence on the empty lot, which has an address of 649 Duncan.

As for the Lyon-Martin House, the emails indicate the couple plans "only to improve 651 Duncan only to the extent appropriate after much further study (potentially kitchen/bath, etc. or other non-impactful ideas)," wrote their architect, Yakuh Askew, in early November.

Neither the owners nor Askew responded to the B.A.R.'s request for comment by the paper's deadline Wednesday. They have met with both Mandelman and city planning staff to discuss the landmark request.

According to Askew's email the focus of the meetings was "to discuss how we can all work together to facilitate the appropriate designation for 651 Duncan and be party to any discussions moving forward."

During a virtual conversation about the landmark request for the Lyon-Martin House that the California Preservation Foundation hosted January 19, architectural historian Shayne E. Watson said she expected there would be some opposition to listing the site as a city landmark. The supervisors can vote to do so, however, without the support of the property owners.

"We do expect to get some pushback on the landmarking," said Watson, a lesbian who co-wrote San Francisco's LGBTQ historic context statement released six years ago.

Should the landmark be approved then any development proposal for the site would need to be reviewed and approved by the city's historic preservation commission. During this week's online talk Mandelman said he was eager to see the report about the Lyon-Martin House from the planning department's preservation staff.

"There is a lot to determine in how we define the historic aspect of the site and what to preserve for the future," said Mandelman. "I am glad there will be thoughtful analysis of this amazing and historic queer site. I think this conversation is important for this site and for other sites."

Lyon and Martin co-founded the influential Daughters of Bilitis, the first political and social organization for lesbians in the United States. They made global headlines in 2004 when they were the first couple to be married by San Francisco officials in defiance of California's prohibition of same-sex marriage.

The state's supreme court would later annul that and the thousands of other marriages that took place during what became affectionately known as the "Winter of Love." It was the reason they would marry again four years later after various political and legal fights to secure marriage rights for same-sex couples.

The Lyon-Martin House would be the city's first LGBTQ historic site in a solely residential neighborhood and the first focused solely on lesbian history. To date, San Francisco has granted city landmark status to only four sites solely for their importance to LGBTQ history.

All are located in commercial corridors. Two are gay bar locations, one is the former home to the AIDS Memorial Quilt, and the fourth was the late gay supervisor Harvey Milk's residence and former Castro Camera shop at 573 Castro Street.

The supervisors are expected in the coming weeks to approve city landmark status for the YWCA/Issei Women's Building located in San Francisco's Japantown. Already listed on the National Register of Historic Places, the property at 1830 Sutter Street was where the early gay rights group the Mattachine Society hosted its first convention in May 1954.

With the uncertainty surrounding the preservation of the Lyon-Martin House, the property is among those likely to be up for consideration as one of the National Trust for Historic Preservation's 2021 list of the 11 most endangered places in America, said Christina Morris, the group's senior field director of its Los Angeles office, during this week's virtual talk.

"It is one of the National Trust's most effective public relations and advocacy programs we have," noted Morris. "It helps to promote and encourage high-profile preservation wins."

Nominations for the list are being accepted through February 1 and the selected locations will be announced June 3. To learn more about the annual list visit www.savingplaces.org/11-most-nominations; to submit a site for consideration email 11Most@savingplaces.org

Anyone with information about the history of the Lyon-Martin House or its owners can email Pilar LaValley, the senior preservation planner working on the San Francisco planning department's report about the site, at pilar.lavalley@sfgov.org