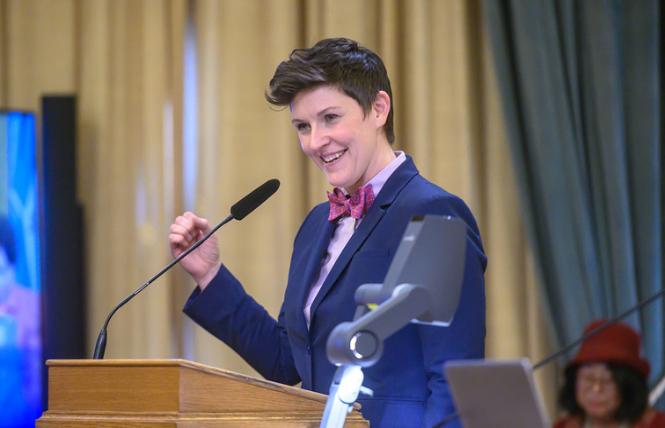 The executive director of Openhouse, the leading service provider for San Francisco's LGBTQ seniors, has announced she will be leaving the position this spring in what she called "the most difficult decision I have ever made."

"It is with great sadness that I am writing to let you know I have made the decision to step down from my role as the Executive Director of Openhouse," Karyn Skultety, Ph.D., a bisexual woman who has held the position since February 2017, wrote in an emailed statement on the afternoon of January 12. "My family and I have decided that we will be moving to Colorado, and my last day as executive director will be May 31, 2021."

Skultety, 44, emphasized that the decision was one of a personal and familial nature, as many reassess their lives in light of the COVID-19 pandemic.

"I love being your executive director. I also love — and am called at this time by — the person I am outside of my work: a wife, mother, daughter, sister and LGBTQ+ chosen family member," she wrote.

In her statement, Skultety noted the pandemic.

"COVID-19 has forced all of us to ask questions about ourselves, our families, and our lives. It has also reminded us how quickly things can change. My family and I are privileged in so many ways, and we have managed to maintain that perspective, even amidst the daunting challenges of the past year," she wrote. "Nevertheless, I have been shaped by this pandemic. I have watched my kids struggle. I have gone through a COVID-19 scare with a family member, which highlighted my role as a caregiver to my parents as they age.

These experiences have shown me the need to prioritize my family at this moment," she added. "I am called to focus my time, energy, and effort on supporting us as we embark on an adventure to Colorado, the state I grew up in."

Skultety, known for her colorful bow ties, noted she is excited about "what the coming months will bring" to Openhouse and that she is "awed by the strength Openhouse possesses as an organization" as its board begins the process of choosing a new leader.

"We are grateful for Karyn's fierce and competent leadership over the past four years, which has ensured that the organization possesses the strength, self-sufficiency and sustainable model of care to embrace this transition," Tim Sweeney, the Openhouse board of directors co-chair, stated in the release. "While we are sad to see her leave our family and community, we fully support her need to focus on the changing needs of her immediate and extended family."

Senior housing milestone
Skultety had stepped down as the vice president of health services at the Institute on Aging to join Openhouse as its executive director in 2017.

In partnership with Mercy Housing, Openhouse runs the senior housing communities at 95 and 55 Laguna streets.

One of Skultety's first tasks was to get construction completed on the 55 Laguna project. Then, Openhouse worked with Mercy and the city on the lottery that selected tenants. The agency also started more programs for seniors, both at its housing complexes and those who live elsewhere in the city.

She also oversaw the buildout of a new community center for LGBTQ seniors as part of the second residential tower at 95 Laguna Street that is part of Openhouse's campus. But construction problems delayed its planned opening in 2019 into early 2020, and the COVID pandemic has further pushed back the agency's plans to dedicate the space.

While the health crisis has upended how the agency provides services to its clients and residents of the Laguna street buildings, Openhouse has continued to offer most of its programs virtually over the last 10 months.

"As the Openhouse housing came into reality, Skultety led the organization in expanding services to reach more than 3,500 seniors and creating new models of care for LGBTQ+ seniors," the Openhouse release states. "This included the formation of a partnership with On Lok to create Community Day Services, one of the nation's first community-based adult day programs co-designed for and with the LGBTQ+ community."

The agency plans to house the innovative program, as well as its other ongoing services, at the new Openhouse Community Center at 75 Laguna when it does open to the public.

"The grand opening has been delayed indefinitely by the COVID-19 pandemic, but 10,000 square feet of service space await when it is safe to resume on-site services," the agency stated in its release about Skultety's pending departure.

The Openhouse board stated it expects to have a new executive director in place by May.