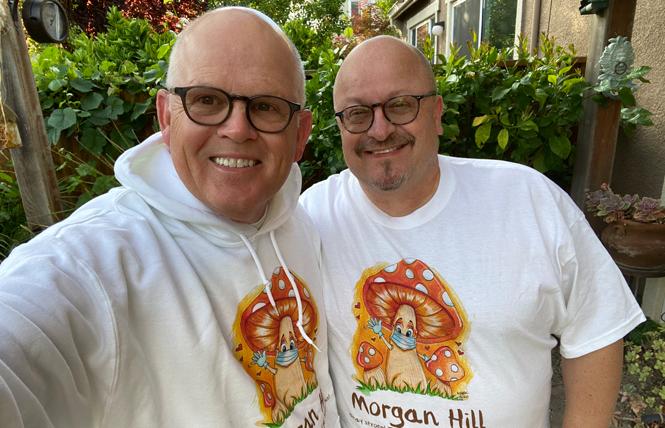 For close to 17 years Rene Spring and his husband, Mark Hoffmann, have called Morgan Hill home. And during that time the bedroom community south of San Jose has seen rapid development of new homes and businesses.

An avid hiker who regularly posts photos to his Facebook page of the numerous animals he encounters on his morning hikes, from wild pigs and turkeys to deer and coyotes, Spring decided four years ago he wanted to have more say in the future of his new hometown. So the native of Switzerland took leadership roles in several community groups and served as a planning commissioner for the city.

He is a big champion of Morgan Hill, setting up a popular Facebook page called "It's Ours, Our Morgan Hill," to promote the local civic scene. But the coronavirus outbreak has made doing so a bit harder the last nine months, noted Spring in a recent phone interview with the Bay Area Reporter.

"Prior to COVID-19, I was out in our community whenever I had a minute to do so," said Spring, 56, a program management director for a global software company who has been working from home since March. "I am a people person. I loved doing that and I miss being able to do so to be honest."

In 2016, Spring decided to run for the District C seat on the Morgan Hill City Council. He was elected, becoming the first known LGBTQ person to serve on the governing body, and in November, he handily won a second four-year term.

"I can bring change. I bring in a voice that was missing on the council before," said Spring, who became a U.S. citizen in 2006. "I am a voice for the environment. I am pretty creative so I like to think outside the box if I can."

His swearing in ceremony will take place at 7 p.m. Wednesday, December 9, on Zoom as the council is meeting remotely due to the health crisis.

"You can imagine I am extremely happy and humbled about it. Down here in our city, we don't have any polls so you don't know where you stand," he said. "As an incumbent you can go either way; people like your track record or don't. People like what I was doing, and I am happy my district sent me back."

He wanted to continue serving on the council so there was a progressive, LGBTQ voice on the body advocating for smart development that includes more affordable housing and office space so residents do not have to commute north to their Silicon Valley jobs.

"I am not in the camp of build as much as you can. I want us to build in a sustainable way and not grow outside the city limits," he said. "We haven't annexed one acreage of land since I have been on council, which was the way it used to be in this city."

Spring is a strong advocate for the protection of Morgan Hill's rural charms and wild landscape. The city is the gateway into the sprawling Henry Coe State Park, which saw roughly 56,000 acres burn due to the SCU Lightning Complex Fire this summer.

"One of the reasons I ran for council was I really wanted to stop the urban sprawl outside of our city limits. We still have ag land and open space, that means a lot to me," said Spring. "I want to preserve it, as do a lot of the people here. It is why they voted for me four years ago."

Voters throughout Santa Clara County overwhelmingly renewed on the November 3 ballot a parcel tax to preserve open space throughout the South Bay. It has helped protect a large swath of Coyote Valley along Highway 101 between San Jose and Morgan Hill from being bulldozed for warehouses and tech campuses.

"There are endless amounts of reasons for why it is good for the environment. It helps with climate change; it helps protect water, as we need the groundwater. Besides being amazingly beautiful when take your time to go hike out there, it is extremely important for wildlife," said Spring for why he backed renewal of the tax and creation of the greenbelt planned for the area. "The cities to the north of us had done a huge mistake and got rid of all their orchards and beautiful ag lands. Once the land is gone, you can't get it back. I want our grandkids to be able to enjoy the beauty of the land as much as I can now."

Spring first moved to the Bay Area in 1998 and met Hoffmann, 63, an artist who also works as a mail carrier, that year in San Francisco. They married in 2008, and Spring is a step-dad to the couple's three adult children and a now a grandfather called "Opa" to three grandkids.

Like many families, they opted not to gather in person for Thanksgiving this year due to the pandemic even though their children all live in San Jose.

"That is really tough. We respect social distancing because we don't live in the same household," said Spring. "We do celebrate birthdays in the driveway. We don't visit in house anymore; it is really hard."

He has turned to baking, especially breads, while he sequesters at home. His posts of his finished creations on Facebook have fostered a new way for him to connect with his constituents.

"There are a whole bunch of new bakers in town. It was fun and I am continuing to do it," said Spring. "The European in me, the Swiss in me can't go for a walk to the bakery and get fresh croissants. I have to bake it myself when I have a craving."

He and Hoffmann had been living in South San Jose but ended up looking at homes to buy in Morgan Hill since it was more affordable and an easy commute for Spring.

"I didn't know anything about Morgan Hill when I moved down here," recalled Spring. "It is an amazing community; I love living here."

After his first successful council race led to news stories about that him being the first gay elected councilperson in South County, meaning Morgan Hill, San Martin, and Gilroy, Spring began to meet other LGBTQ residents of the area. There is a growing LGBTQ community in the three cities, he said, leading to a need for LGBTQ-focused services in that part of the county.

"I want people who live in San Francisco to know there is this wonderful community here. Morgan Hill is less than an hour away; come live here and visit," said Spring. "You are welcome here. They embrace the LGBTQ community here."

UPDATED 12/7/2020 to correct the spelling of Mark Hoffman's last name.