Out in the Bay: Queer twins wade through intergenerational trauma together 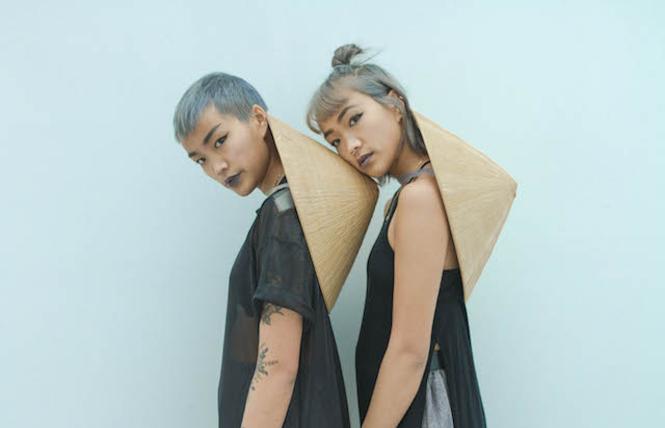 Sal and Nancy Tran are children of Vietnamese immigrants, artists and twins who grew up in Vallejo, California. The youngest of seven kids, they've uncovered antidotes to ancestral trauma through experiencing parallel night terrors.

"It's overwhelming, but to understand that we have the ability to break cycles of trauma," is important, filmmaker Sal Tran says in this week's Out in the Bay feature with Nancy Tran. "It's scary, but I believe we are the people in our families to do that."

Growing up in an abusive household, Sal Tran says, they "didn't have time to grieve, be mad or disappointed." Instead, musician Nancy Tran explains, "I internalized it," and "didn't know how to acknowledge it so I started blaming myself."

During high school, the twins found freedom in band. "That exposed us to a lot of personalities," Nancy Tran says. "It was pretty fluid and that helped us have a different perspective."

Band, drumline, and color guard pushed the twins to think beyond binaries and break through confinements of what they were supposed to be.

"I feel like most artists are queer, whether they identify as queer or not," Sal Tran says. "I think there's the fundamentals of embracing the fluidity of where art can take you."

Sal Tran wrote and directed the short film, "Xanh," which has been featured at the Transgender Film Festival in both San Francisco and Seattle, as well as the Korea Queer Film Festival in Seoul. The film's nonbinary protagonist finds liberation through shopping for themselves while dealing their mother, a seamstress who attempts to feminize their child by making clothes for them.

On set as the wardrobe stylist, Nancy Tran helped Sal Tran with the production of the film. More than siblings, the twins are collaborators. Through a queer lens, they make amends with their "Vietnamese-ness" through incorporating images like the Ao Dai, a traditional Vietnamese garment, into their work.

"I hated wearing the Ao Dai as a kid," Sal Tran says, but now it's a part for their production company, Sunkissed Productions. For the twins, embracing their Vietnamese-ness feels like coming home.

As artists in the current sociopolitical climate, they're thinking about how to center Black lives. As Vietnamese Americans, they believe their part in this movement is to talk with the Vietnamese elders. "Lets be real, Vietnamese people are hella anti-Black," Sal Tran says. "I believe the conversation starts at the dinner table."

Hear more from Sal and Nancy Tran on this week's Out in the Bay-Queer Radio from San Francisco. The program re-airs at 9:30 a.m. Saturday, November 28, on KSFP Radio, 102.5 FM in San Francisco only, and is available anytime on Out in the Bay's website.

Truc Nguyen is a producer of Out in the Bay-Queer Radio from San Francisco. Learn more and listen at https://www.outinthebay.org/