Out in the World: US election brings global relief, LGBTQs ready to restore human rights 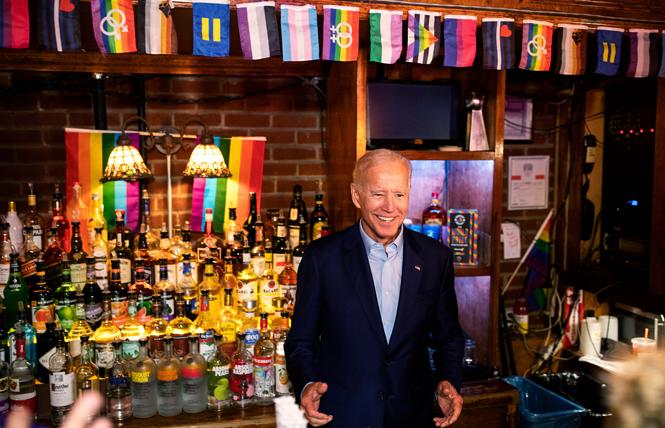 LGBTQ people around the world breathed a collective sigh of relief as news spread last weekend that Democrats would return to the White House as Joe Biden was declared president-elect.

Queers were also excited about Vice President-elect Kamala Harris' historic feat of being the first female vice president, the first Black woman, and the first Indian American woman to hold the post.

"LGBTQ people are over the moon that Harris is of Jamaican descent," gay Jamaican attorney Maurice Thomlinson wrote to the Bay Area Reporter, expressing his and his countrymen's pride. "As LGBTQ Jamaicans, it is even more significant that she is an ally because it will embolden our calls for inclusion and acceptance by our Jamaican families!"

LGBTQ people around the world knew the stakes were high as they watched and waited with much anticipation as the results trickled in for four days following Election Day.

Saturday morning many Americans awoke to the news Biden was elected president and Oakland native Harris would be vice president of the U.S.

World leaders called Biden and Harris to express their congratulations.

President Donald Trump and other Republicans went on a legal attack, baselessly claiming election fraud. Trump has so far refused to concede.

Late Monday, Attorney General William Barr ignored the fact that there has been little evidence of election fraud. ABC7 News reported that Barr ordered Department of Justice prosecutors across the country to pursue "substantial allegations" of voting irregularities, if they exist, before the presidential election is certified.

Nonetheless, LGBTQs around the world were thrilled.

Frank Mugisha, executive director of Sexual Minorities Uganda, expressed that he and others felt "relief, and a sense of back-to-the-normal-world" in an unusual year with the global pandemic, racial unrest around the world, and four years of increasing right-wing rhetoric and attacks against the LGBTQ community.

"The last four years, we [have] hung on [a] balance," wrote Mugisha in an email interview with the B.A.R.

Thomlinson said he had a "sense of impending doom" leading up to the election.

"I [was] certain that silent Trump supporters were willing to give him another term, despite the havoc that he wreaked on the lives of LGBT people," he wrote.

"Many Caribbean governments have refused to recognize human rights of LGBT people because they argued that these were somehow 'special' rights, and Trump and his State Department reinforced that dangerous worldview," he continued.

Mugisha described the "threats to bring back the anti-gay law in Uganda," along with multiple assaults against Uganda's LGBTQ community — including this year's arrest of 49 queer youth at a shelter during the pandemic — during the Trump administration's tenure in the White House.

In August, a court summoned the two officials responsible for leading the arrest and torture of the 49 LGBTQ youth. The officials and the judge did not appear in court.

"We have not had much support from the U.S.," wrote Mugisha, who is confident with the election of Biden and Harris the situation will change for LGBTQ Ugandans.

Mugisha wrote that he does not believe Biden and Harris will save LGBTQ Ugandans, but he knows what it means for his community and country.

"We shall have another level of protection from our conservative governments," he wrote. "This will enable us to do our advocacy and speak up on violations and hold our own governments accountable."

Thomlinson is currently fighting for marriage equality in Jamaica. Biden and Harris' election gives him hope for his own battle, he wrote.

Like many LGBTQ people around the world, OutRight Action International Executive Director Jessica Stern told the B.A.R. in an email statement that her staff and agency partners, who are located throughout the world, "anxiously" followed the U.S. presidential election.

"Both possible outcomes would have had tremendous implications for LGBTIQ people across the world," said Stern, listing off a grim potential future under four more years of a Trump administration.

The Harris factor
LGBTQ people of color are especially encouraged by Harris' election as vice president.

"It is so good for us being a minority ... this shows that our voices can be heard," wrote Mugisha.

Thomlinson pointed out that Jamaica has been "notoriously resistant in supporting human rights for LGBT people," but country leaders were quick to congratulate Harris.

"They now cannot ignore her calls for greater inclusion based on her own lived example," said Thomlinson.

Harris has been a longtime ally of the LGBTQ community and got her political start when she was elected district attorney in San Francisco.

"This election is about so much more than Joe Biden or me. It's about the soul of America and our willingness to fight for it. We have a lot of work ahead of us. Let's get started," Harris tweeted after media outlets called the election Saturday.

Human rights and LGBTQ advocates are ready to work but expressed clear expectations and goals for the Biden administration.

Applauding the election of Biden and Harris, Stern said, "They bring in a leadership which is openly and actively supportive of LGBTIQ equality."

She was cautious about queers' expectations for restoring the LGBTQ movement globally and at home.

"The political shift in the U.S. will not happen overnight or automatically change the actions of others," Stern noted. "However, OutRight is looking forward to welcoming the U.S. back into the network of allies dedicated to a world in which LGBTIQ people can live free from discrimination and violence."

HRW's statement echoed a "bounce forward" response that has reverberated from industries and organizations to people throughout the novel coronavirus pandemic.

"It is not enough to turn the clock back four years. The world has changed. So must the U.S. government's response," the statement declared about the loss of faith in the U.S. by close allies due to the country's departure from international human rights standards and its response to the pandemic.

"The challenge for President-elect Biden is not simply to adopt a better human rights policy but also to introduce human rights principles as a genuine guide," stated the HRW release. "Only an affirmation and entrenchment of those principles has a chance of persuading allies and adversaries alike that Washington's commitment to human rights is more than the passing preference of a given president."

Mugisha; Thomlinson; Fabrizio Marrazzo, spokesman of Italy's Gay Center in Rome; and gay Indian Prince Manvendra Singh Gohil expressed hopes that their countries would strengthen ties with the U.S. during the Biden administration.

The US matters
Many LGBTQ activists from Africa to Europe spoke about the influence the U.S. has on their governments and the importance of this election.

"You could clearly see that after Trump's win four years ago, the appetite of conservative populists grew tremendously and the same awful rhetoric and action against LGBTQI people, which was unthinkable before Trump's era, was suddenly present in our political and public discourse as well," prominent gay Czech marriage equality activist Czeslaw Walek wrote to the B.A.R.

He is looking forward to a "change of rhetoric and the rudeness that Trump brought to American politics [that] influenced our politics too," Walek wrote. Four more years of that would have had "devastating effects on our lives."

Hopeful for the future, Walek wrote, "Biden will bring decency, empathy, and support to public discourse: this is what we all need."

"What happens in the United States affects us here in Africa," wrote Mugisha.

He only hopes for the "extra radical rhetoric" to lessen and to be able to advocate on behalf of the Ugandan LGBTQ community.

"This election was crucial because of the significant role that America plays both economically and socially in the Caribbean," wrote Thomlinson, noting trade and court decisions on LGBTQ rights.

"The United States is the largest trading partner for much of the Caribbean and our cultures are heavily influenced by America," he wrote.

Hope for the future
Eyeing the future, LGBTQ advocates around the world expressed their wish list for the new administration that includes less anti-LGBTQ rhetoric, restoring the U.S.'s position as a human rights leader and influencer on other countries, and strengthening ties among countries and regions.

Stern is looking forward to the U.S. reinstating its human rights stance on the global stage, reversing many of the Trump administration's policies, language, and funding that took the country away from its traditional position on international human rights.

Some of the things she wants to see the Biden administration do is restore the U.S.'s role at the United Nations, particularly on the Human Rights Council and the World Health Organization, along with ratifying major human rights treaties at the U.N. and the Organization of American States.

She hopes to see America's recommitment to international standards for human rights and renouncement of the Trump administration's harmful definition of human rights based on "natural law" and "natural rights" in the Commission on Unalienable Rights and a return to inclusive definitions for all gender identities and removal of religious exemptions.

Stern would like to see a new U.S. Special Envoy for the Human Rights of LGBTI Persons appointed and resourced, and to see increased funding for USAID and the State Department for LGBTQ civil society organizations globally working to promote LGBTQ rights around the world.

The U.S. LGBTQ expert's office was launched by the Obama administration.

"Even in 2020, there is not one country in the world where LGBTIQ people live with full safety, rights, and dignity," Stern said.

In Italy, where Biden's election "brought a lot of enthusiasm," Marrazzo wrote to the B.A.R. that he hopes there will be a continuation of the Obama administration's LGBTQ policies, such as implementing an international commitment to LGBTQ rights in Europe and the world.

Walek hopes the Biden administration will "loudly call out" Hungary and Poland for their anti-LGBTQ movements and harm to their LGBTQI citizens, he wrote.

Walek and Mugisha said they hope Biden will appoint new ambassadors to the Czech Republic and Uganda who can work on LGBTQ issues with their respective governments.

"What we wish for is to have politicians who will not summon demons of hatred against us LGBTQI people, but who let us live as we want to," Walek stated.

Thomlinson expressed hope that Harris and Biden will be able to persuade Caribbean governments to change its own perspectives and policies about LGBTQ rights by leading by example.

Stern looks forward to working with and holding the Biden administration accountable for an inclusive intersectional human rights agenda and to "reestablish respect for LGBTIQ rights throughout U.S. foreign policy, she said.

"Our work for LGBTIQ equality is far from over," she added.