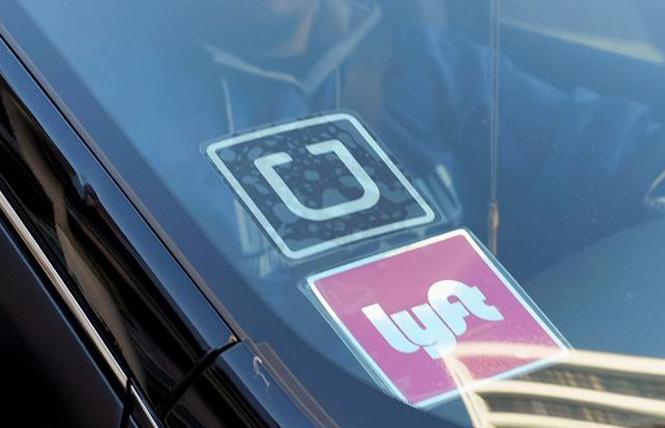 Uber and Lyft spent over $200 million for Yes on Proposition 22. Photo: Courtesy AP

The passage of Proposition 22, which grants exemptions to Uber, Lyft, and other app-based companies from California's gig worker law, dealt a crushing blow to workers' rights, opponents said, and a win that advocates said may soon go nationwide.

The measure, which passed with 58.4% of the vote, according to unofficial returns, was the app-based services' answer to the controversial AB 5, the gig-worker bill that was signed into law by Governor Gavin Newsom last year.

AB 5 changed the status of app-based drivers, among other workers, from independent contractors to employees. Uber and Lyft had been fighting the law in court and secured signatures to put Prop 22 on the ballot.

Cherri Murphy, a Lyft driver and independent social justice minister in the East Bay, is a Black queer woman who is a lead organizer with Gig Workers Rising, a leading advocacy organization for labor protections for gig workers. She said that Prop 22's success was a loss for economic justice.

"We were in for a fight up and down the ballot regarding racial and economic justice, including Prop 22," Murphy said. "It gutted wage and labor protections and created a special law for Lyft, DoorDash, and Uber. It guts workers' rights to collective bargaining, and to file for unemployment in the middle of a pandemic and a recession."

Murphy believes many Californians voted for the measure because of the over $200 million the companies spent on advertising during the campaign.

"This ballot measure was deceptive in its campaigning," Murphy said. "Two hundred million dollars was spent tricking voters into thinking this was a pro-worker campaign, but it exempts any ordinances created for workers to take sick time off in the middle of a pandemic."

Anthony Foxx, chief policy officer at Lyft and former U.S. secretary of transportation under former President Barack Obama, was among several who has expressed a desire to bring Prop 22 to other states now that it passed in progressive California.

"Ideally, now that this issue has been resolved in California we can have a broader conversation about how to replicate something like Prop 22," Foxx told the Hill last week.

Responding to that prospect, Murphy said all she can do is keep fighting.

"Organizing will continue," Murphy said. "I'm so proud to stand beside other app-based workers and unions — everyone who stood up to make this clear."

In a statement on November 10, Uber spokesperson Davis White praised the passage of the measure.

"California voters agreed that instead of eliminating independent work, we should make it better," White stated. "Soon, drivers in California will be guaranteed a minimum earnings standard of 120% of minimum wage and will gain access to important new benefits like health care, accident insurance, and more."

The measure does guarantee 120% of the local minimum wage for the time drivers are actively engaged in trips. While it does not mandate or provide health insurance, it requires for some drivers a stipend they can use to cover some health care costs.

Proposition 15, known as the "split roll" fix, would have repealed 1978 commercial property tax caps for properties worth over $3 million, generating billions of dollars in tax revenue for schools and local governments.

But it failed, 51.7%-48.3%, according to preliminary results. Though it would not have applied to residential property, opponents portrayed it as a stepping-stone to repealing 1978's Prop 13, often called the third rail of California politics. Proponents touted increased money it would have provided the state's education system.

Proposition 21 was resoundingly rejected, with 59.6% voting no, according to preliminary results. Similar to 2018's Prop 10, Prop 21 would have expanded local government's ability to enact rent control laws, ending statewide limits on such ordinances that were imposed by the Costa-Hawkins Act in 1994.

San Francisco was the only California county where Prop 21 passed, according to election returns.

The AIDS Healthcare Foundation provided $40 million, almost all of the funding for Prop 21. When reached for comment, René Christian Moya, the director of Housing is a Human Right at AHF, blamed Newsom for opposing the proposition.

"Running against both the governor of California and his allies in the powerful real estate industry was never going to be easy. Given the headwinds we faced — some very deep-pocketed and deceitful opponents — we are disappointed, although not completely surprised that Prop 21 fell short at the ballot box tonight," Moya stated to the B.A.R. November 3. "We vow to continue the fight for housing justice for California's 17 million renters and express our profound gratitude to our dedicated campaign team as well as great thanks to over three-hundred organizations, elected officials and individuals who endorsed Prop 21 — a coalition that will live to fight on in this battle."

AHF was also a major bankroller of Prop 10. When asked if the foundation's money would be better spent on HIV/AIDS services, Ged Kenslea, the senior director of communications for AHF, wrote that "we believe that we can walk and chew gum at the same time between our HIV/AIDS care and treatment programs and our innovative housing programs and advocacy such as Proposition 21."

"Research has shown that stable housing is a crucial determinant of health outcomes and well-being, something even more important for people living with chronic conditions like HIV or AIDS," Kenslea wrote. "AHF is also confident that our housing efforts with this ballot measure (as well as with our Healthy Housing Foundation, which currently provides housing to over 700 extremely low-income or formerly homeless individuals in eight former SRO hotels in greater Los Angeles) fall under both advocacy and health care."

Proposition 19, on the other hand, passed with 51.1% voting yes, according to preliminary results.

The measure will change property tax transfers in two ways. Californians 55 and older, the disabled, and those displaced by wildfires could move their property tax rates with them throughout the state.

The proposition will also change rules related to inheritance, requiring children or grandchildren to live in a house if they are also to inherit its low property tax rate.

The Bay Area Reporter will have more on the other state propositions next week.