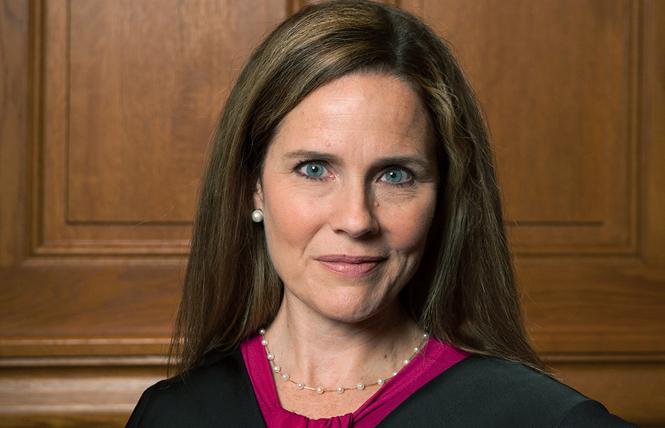 For at least the past 15 years, the U.S. Supreme Court has had a 5-4 conservative majority. Until 2018, the moderate conservative Justice Anthony Kennedy served as the swing vote, and his leftward bent on LGBTQ+ rights resulted in major decisions striking down anti-sodomy laws, protecting LGBTQ+ people from discrimination, and securing marriage equality. When he retired, the conservative bloc struggled to find its equilibrium, giving the liberal justices opportunities to form unlikely coalitions in key cases. One of these was Bostock v. Clayton County, which held that LGBTQ+ people were protected from workplace discrimination under Title VII.

With the confirmation of Justice Amy Barrett to the Supreme Court, and the dawn of a 6-3 conservative super-majority, the struggle for LGBTQ+ rights in the courts may have stalled. Most legal observers anticipate that Barrett will be hostile to LGBTQ+ rights, based on her radical views of "religious freedom." Barrett, like some of the other justices, believes that the Constitution protects the "right" of religious individuals and organizations to ignore laws with which they disagree.

The justices specifically declined to adopt this position in the 2018 Masterpiece Cakeshop case, in which the court held that a baker did not have a constitutional right to discriminate against gay and lesbian customers. However, in a series of cases, the Supreme Court has created, and slowly expanded, a narrow religious freedom doctrine for religious institutions. In 2012, the court held that religious institutions had a right to ignore anti-discrimination laws in the selection of clergy. This right has no basis in the text of the Constitution, but the conservative justices have reasoned that any government interference in the selection of clergy would create an undue entanglement in religion. In 2019, the court expanded this nascent religious freedom doctrine to cover all church employees, including secular teachers at religious schools, largely on the same grounds.

On November 4, in the shadow of the national election, the Supreme Court heard oral arguments in another case seeking to further expand the court's new religious freedom doctrine. In Fulton v. Philadelphia, the court heard the appeal of Catholic Social Services, which lost its contract to provide foster care and adoption services with the city of Philadelphia because it refused to provide services to LGBTQ+ people. The city determined that this was a violation of its anti-discrimination law and ended the contract.

The question before the justices is whether Philadelphia violated the religious freedom of CSS. In order for the court to find in favor of CSS, it would have to expand its religious freedom doctrine once again, to allow religious institutions to discriminate against their customers and clients.

During oral arguments, Justice Brett Kavanaugh accused the city of "looking to pick a fight" because no same-sex couples had actually been turned away by CSS. However, finding in CSS' favor would almost certainly result in LGBTQ+ people being excluded from key public services because religious institutions have become a critical part of the U.S. social safety net. They have taken a central role in poverty and homelessness programs, adoption and foster care programs, and even our health care system.

In adoption and foster care alone, allowing discrimination by religious institutions would mean tens of thousands of LGBTQ+ children and millions of LGBTQ+ couples potentially losing access to foster care or adoption services. It would mean as many as 60% of homeless shelter beds becoming unavailable to the homeless members of the LGBTQ+ community. It would mean one-sixth of hospitals refusing to serve LGBTQ+ people.

Perhaps even more troubling, however, was a question by Chief Justice John Roberts. Even though the case has nothing to do with same-sex marriage and CSS is not challenging marriage equality, Roberts specifically asked CSS' lawyer if it wanted the court to overturn Obergefell v. Hodges, the 2015 case that legalized same-sex marriage nationwide. CSS' lawyer demurred, but that question should send chills down the spine of every American. For a chief justice to unilaterally raise a legal issue that was never raised by the litigants at trial or on appeal is an almost unprecedented breach of judicial norms. It signals a court that is ready to enforce its radical anti-LGBTQ+ ideology, and, just as President Donald Trump flouted democratic norms, we may be seeing the first signs that his judicial appointees or the other conservative justices will do the same on the nation's highest court.

Fulton is the first test of LGBTQ+ rights on the Barrett court that is stocked with three Trump-appointed activist judges. So far, it appears that we're in trouble. Just a week after Barrett's confirmation, the court is already moving quickly to legalize discrimination against LGBTQ+ people, and the justices have made known their desire to begin overturning the precedents that we worked for decades to achieve.

Nevada may offer a path forward. In this election, Nevadans approved a constitutional amendment protecting marriage equality. This means that if the marriage equality cases (Obergefell and Windsor) are ever overturned by the U.S. Supreme Court, Nevadans will still be protected. The LGBTQ+ community should follow this example. Relying on the federal courts is simply not going to be an option anymore. We need to adapt and begin codifying our legal gains in statutes and state constitutional amendments. We need to take our case to the statehouse, not the courthouse. Until we flip the Supreme Court, that is likely our best (and maybe only) path forward.

Michael Vargas is an adjunct professor of law at Santa Clara University Law School and an attorney at Rimon, P.C. in Menlo Park. Vargas is also the co-president of the Silicon Valley Stonewall Democrats and policy chair for the Rainbow Chamber of Commerce Silicon Valley.