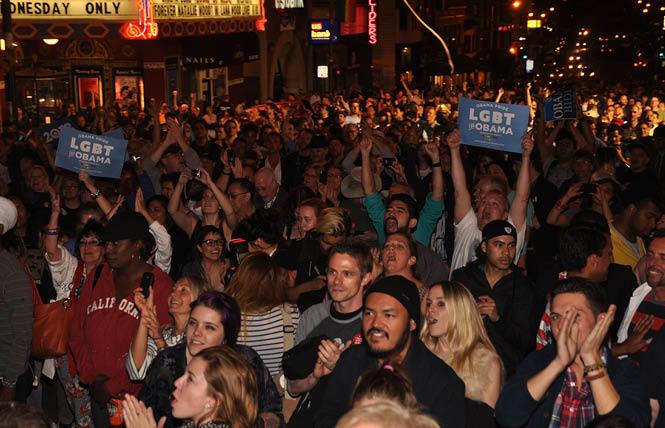 For politicos, election night is usually a swirl of party hopping between public campaign celebrations and more private get-togethers. But the COVID-19 pandemic has largely put the kibosh on such revelry in 2020.

There are a few in-person election night parties being hosted by candidates this year, but most are abiding by health rules calling for people to avoid large gatherings in order to prevent transmission of the coronavirus. The evening of Tuesday, November 3, is largely going to be a home alone affair, with election watchers glued to their TVs, cellphones, and computer screens from the safety of their living rooms.

"We are still trying to figure out what we are going to do to be honest with you. I don't know if we are going to have a party; it is something we have debated," David Campos, a gay man who chairs the San Francisco Democratic Party, told the Bay Area Reporter in a brief phone interview October 28 ahead of the monthly meeting for the party's oversight committee. "I am not really sure if any of that is going to happen, to be honest."

With prognosticators and candidates on both sides of the political aisle calling this year's national elections the most consequential in generations, and control of the White House, U.S. Senate and various statehouse chambers up for grabs, the thought of not being able to gather with others to cheer or commiserate the outcomes is disappointing, noted Campos.

As the B.A.R. reported online last week, local LGBTQ community members who had planned to host an election night gathering in the streets of San Francisco's Castro district reversed course and advised people to instead stay home Tuesday night. Gary Virginia, one of the event hosts, updated the event Facebook page October 28 to alert people that "with an abundance of caution, the name and nature of this event on November 3rd has been changed to 'Election Night Watch Party in San Francisco' with a pivot toward 'get out the vote' and 'ballot tracking' actions across all time zones, and an evening 'watch party' from homes."

Instead of mingling among the masses on Castro Street in the heart of the gayborhood, those who had planned to attend are now advised to "consider a shout out or noisemaker from your home window, doorway, balcony, or sidewalk with a mask on" should the election results in the presidential race be announced before midnight Tuesday. People are also being encouraged to "consider a 'Light Up' night activity (red, white or blue) with outdoor home & business lights to show support, encourage safety" Tuesday night.

LGBTQ candidate gatherings
The Political Notes column checked in with a number of LGBTQ candidates around the Bay Area to see what they have planned for Tuesday night once the polls close. The response was a mixture of watching returns come in at home with family, hosting virtual events, or moving their celebrations to outdoor venues.

One of the few candidates hosting a public event Tuesday evening is Jackie Fielder, a queer educator running for a state Senate seat against gay incumbent Senator Scott Wiener (D-San Francisco). She is inviting her supporters to join her starting at 8 p.m. at the Spark Social food truck park at 601 Mission Bay Boulevard South adjacent to the UCSF Mission Bay campus.

"All the early mornings at bus stops, all the afternoons in the sun dropping literature, all the phone calls, all the fundraisers, all the hard work that my team and our thousands of volunteers have put in all comes to a head on Tuesday night. And to celebrate we are throwing a socially distanced party!" Fielder wrote in an emailed invitation to her supporters last Thursday, October 29.

Wiener told the B.A.R. he opted to forgo a public party this year and instead will be gathering privately at an open-air space with a small group of his campaign team, backers, and friends on Tuesday night.

Joel Engardio, a gay man seeking the open District 7 seat on the San Francisco Board of Supervisors, is eschewing the normal indoor party for a private outdoor "drive-by appreciation" Tuesday night an hour after the polls close to thank his campaign supporters.

"My campaign team and I will line the sidewalk and thank the volunteers and donors who slowly drive by," he told the B.A.R. "For those who are comfortable, they can park and gather outside socially distanced and masked to hear me say a few words and hopefully share some early results."

In the South Bay, where Democratic Assembly candidate Alex Lee is likely to be elected as the first out bisexual to serve in the state Legislature, his campaign is hosting a virtual party Tuesday night. Lee is running for the open Assembly District 25 seat that includes parts of Alameda and Santa Clara counties.

"We'll be doing a fun watch party in my campaign discord," she told the B.A.R.

People can join via https://fierce.vote/event/virtual-election-watch-party/

Devin Murphy, a gay man running unopposed for a seat on the Pinole City Council in the East Bay, told the B.A.R. last week that he didn't plan to host a campaign event Tuesday night. If anything, he said he might virtually join members of the Lambda Democratic Club of Contra Costa County, which he is currently president of, to watch returns come in.

"No, unfortunately not," said Murphy when asked if he would be throwing a celebration.

Slightly disappointed by that fact, Murphy nevertheless is excited to join the council as its only second out LGBTQ member. His swearing in will either take place on December 1 or December 15, depending on how soon elections officials certify the results.

"I am just ready to get to work," he said. "I am excited about the opportunity to serve."

Community election events
Those looking for a non-candidate-centric event tomorrow night have several options for watching returns come in with others.

San Francisco-based drag queen Juicy Liu, the alter ego of GAPA Chair Michael Nguyen, is co-hosting a virtual results viewing party November 3. Nguyen, who is one of the ambassadors this year for the Drag Out The Vote campaign, is teaming up with writer, comedian, and playwright Luna Malbroux to present the online election night watch party from 8 to 10 p.m.

Joining them will be the San Francisco AIDS Foundation's senior community mobilization manager Ande Stone and Baruch Porras-Hernandez, the community events manager for the agency's Strut health clinic in the Castro. To RSVP for the event, click here.

The San Francisco Sex-Positive Democratic Club is also throwing an online event Tuesday night. It too kicks off at 8 p.m. and will be accessible here.

"Election Night 2020 is likely to be one of the most surreal evenings of our lives," noted the political group. "Once the polls close, hop into our Zoom room with a beverage of choice, share your thoughts, and be in community as we wait on the edge of our seats for the results to come in."

And the gay-owned Manny's in San Francisco's Mission district will be closing down Valencia Street between 15th and 16th streets Tuesday starting at 5 p.m. to host its own election night viewing party. Tickets cost $18 per person but must be purchased as part of a table of people within the same household or "pod." (Half of each ticket price will benefit local small businesses.)

Tickets must be purchased in advance here and come with rules attendees must adhere to, such as wearing masks and no tablehopping.

"We opened Manny's two years ago on election night 2018," noted owner Manny Yekutiel, 31, in a news release about the outdoor event. "There is no way we were going to let a pandemic get in the way of coming together safely to dine and watch as the country finally defeats Donald Trump, flips the Senate blue, and keeps our strong majority in the House of Representatives!"