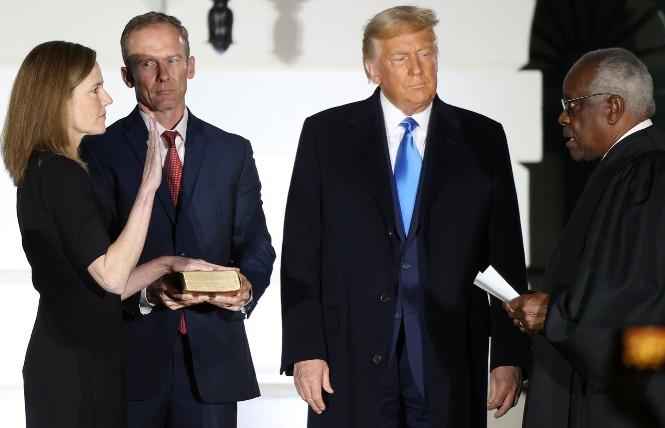 Federal Judge Amy Coney Barrett was sworn in as the newest member of the U.S. Supreme Court Monday night, following her confirmation vote in the Senate, which was mostly along party lines.

Barrett was confirmed October 26 on a vote of 52-48, with only one Republican, Susan Collins of Maine, voting against. Her confirmation tilts the high court firmly to the right, as she becomes the sixth conservative justice.

Barrett's swift confirmation, and her swearing in at the White House, is expected to have dramatic impact immediately, including in ongoing disputes over the presidential election. The Supreme Court has voted 4-4 on several emergency requests to curb the use of mail-in ballots, with the tie votes leaving in place state court decisions that protect such ballots.

On November 4, she will participate in oral arguments in a case, Fulton v. Philadelphia, which will review a lower court decision that held a Catholic foster care agency could not discriminate against same-sex couples. The conflict is a long-standing one and has implications beyond church-run organizations and foster care to commercial businesses.

Shortly after the election, on November 11, the Supreme Court will take up a case challenging the Affordable Care Act. And there are cases on the court's docket that Barrett could provide a necessary fourth vote to accept — involving the definition of "religion" in employment disputes and whether Title VII protections apply to the military, just to name two.

The National LGBT Bar Association issued a statement Monday night, saying, "Judge Barrett's record and words have shown that she will be a threat for LGBTQ+ rights, marriage equality, and health care on the Supreme Court."

Lambda Legal Defense and Education Fund called the vote "a dark day for our justice system and American democracy."

"Amy Coney Barrett deeply alarmed us during her confirmation hearings when she refused to say whether she believed cases that are the backbone of the legal rights of LGBTQ people — such as Lambda Legal's landmark case, Lawrence v. Texas, which decriminalized same-sex intimacy, and Obergefell v. Hodges, which legalized same-sex marriage — were correctly decided. We fear that all the progress we have made in recent years is now at risk," stated Lambda Legal.

One of the Senate's independent members, Angus King of Maine, gave a floor speech suggesting strongly that, once the Democrats take the majority, Republicans should expect they, too, will break rules around the nomination and confirmation of justices.

Collins was the lone Republican vote against Barrett, even though Senator Lisa Murkowski of Alaska (R) had vowed last month not to vote to confirm. Collins' reelection this year has been in jeopardy since she strongly supported the confirmation of Brett Kavanaugh in 2018.