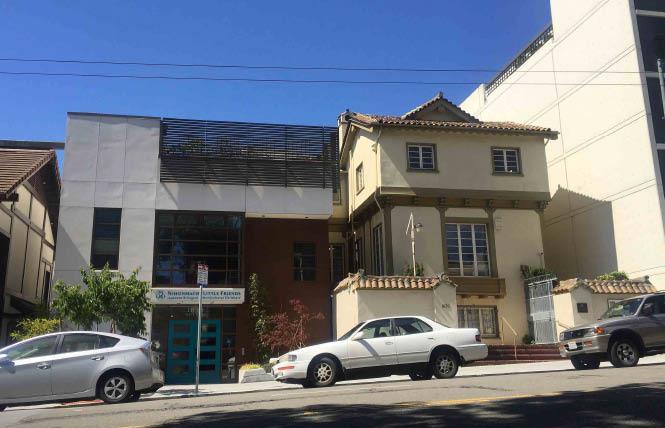 A day after San Francisco officials moved forward with the process to landmark the home of an iconic lesbian couple, a historic Japantown site with ties to LGBTQ history took a step closer to becoming a city landmark.

At its meeting October 21 the city's historic preservation commission unanimously voted 6-0 in support of a request to designate the Japanese YWCA/Issei Women's Building as a city landmark. Earlier this year the property at 1830 Sutter Street was officially listed on the National Register of Historic Places.

The Japantown building is also now listed in the California Register of Historical Resources, providing some protections to the two-story-over-basement, wood frame structure designed by famed architect Julia Morgan. Its designation as a city landmark will provide it with even greater protection from seeing its exterior facade from being altered or the building being demolished should it ever change ownership.

Apart from the historic events that occurred within the building, the structure itself is "an excellent example of the work of master architect Julia Morgan," noted city planner Francis McMillen in presenting the landmark designation request to the commission.

Gay historic preservation commissioner Jonathan Pearlman said the Y site would be a "fine addition" to the city's list of local landmarks.

"This is such a rare moment for us when architecture we typically celebrate as a landmark is tied into so much of the history of San Francisco's culture going back to the early 20th century," he said.

Fellow commissioner Lydia So, who noted Morgan inspired her to become an architect, highlighted how the site not only recognizes the "perseverance" of female Japanese Americans but also "alliances with so many other cultural groups and the LGBTQ community."

The owner of the site, the Nihonmachi Little Friends, is supportive of having it become a city landmark. Karen Kai, with the child care center, told the commission it has been a long time coming, as it was first proposed to become a local historic site in 2013.

"I don't know if that is really long for you as the process, but for us it seems like a really long time," said Kai, adding that it also has been "really fruitful and productive. It taught us a great deal about our building, our community, and our ties to other communities."

Two are gay bar locations — the Twin Peaks in the Castro and the now defunct Paper Doll in North Beach — and one is the former home to the AIDS Memorial Quilt on upper Market Street. The fourth is the late gay supervisor Harvey Milk's residence and former Castro Camera shop at 573 Castro Street.

Tuesday the Board of Supervisors approved a request from gay District 8 Supervisor Rafael Mandelman that the city begin the process to make the house at 651 Duncan Street in the city's Noe Valley neighborhood a city landmark. It was long the home of the late lesbian pioneering couple Phyllis Lyon and Del Martin and was recently sold by the late couple's family to David R. Duncan for $2.25 million.

The historic preservation commission now has 90 days to take up the matter before sending it back to the supervisors for a final vote on designating it a city landmark.