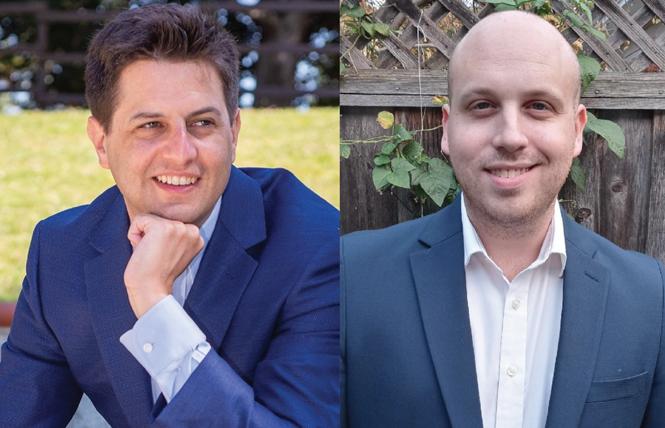 Two gay men who grew up in the South Bay are aiming to make LGBTQ political history in their respective cities come the November 3 election. Either would be the first out male city council person in their hometowns.

In Cupertino, Joseph "J.R." Fruen is believed to be the first out person to seek a council seat in the city. Thus, if elected, the attorney would be the first LGBTQ person to serve on the City Council.

In neighboring Santa Clara, planning commissioner Anthony Becker is seeking to become the second LGBTQ person to serve on the City Council. The first was Jamie McLeod-Skinner, a lesbian elected in 2004 who served for eight years and now lives in Oregon, where she came up short in this year's primary race for secretary of state.

Fruen, 41, and Becker, 35, are part of a crop of younger LGBTQ candidates seeking elected office throughout the Bay Area this fall. They are advocates of building more housing and denser developments in their hometowns to address the sky-high home prices that make it near impossible for many of the people they grew up with to afford to live there.

And they have attracted broad support from across the political spectrum and within the LGBTQ community. The two main LGBTQ political groups in Santa Clara County — the Bay Area Municipal Election Committee and the Silicon Valley Stonewall Democrats — both endorsed Fruen and Becker, as did the San Jose Mercury News and the Santa Clara County Democratic Party.

While Fruen is one of five people running citywide in Cupertino for two council seats, Becker is one of three people seeking Santa Clara's newly created District 6 council seat. The two talk often, as the district Becker wants to represent is within the boundaries of the public K-8 Cupertino Union School District, on whose citizen advisory committee Fruen serves.

This is Fruen's first time running for public office, while Becker is mounting his third campaign, having lost a mayoral bid two years ago and coming up short when he first ran for a council seat in 2016.

Becker graduated from San Jose State University with a degree in radio film and television. He is a freelance filmmaker and works for a company that polices problematic content on the internet. While he makes $60,000 a year, he has been public in his campaign that he struggles to afford to live in Santa Clara as a renter and is priced out of the local housing market.

"I didn't leave mainly because this is my home. I was always comfortable growing up here," said Becker, whose grandparents moved to the city in the 1950s. "It is a great community for everybody to start their lives, whether you are gay, straight, whatever."

As he has knocked on doors to talk to voters, Becker said he encounters longtime residents seriously considering selling their home in order to move where their children now live or young families already wondering how their children will be able to afford to live there when they become young adults, Becker told the Bay Area Reporter in a phone interview this week.

"They just want be somewhere they can retire where their kid can be close by; that is the biggest factor," said Becker, whose partner, Abel Cardona, works for Amazon. "Every parent I talk to is fearful their children can't afford to live here. I can relate to that."

His parents ended up buying a place in Los Banos when he was a teenager and he graduated from high school there. But they maintained a house in Santa Clara, which was sold after his father died from liver cancer in 2014.

Rather than move away, Becker found an apartment to rent. And his dad's passing motivated him to become more involved civically, leading to his running for office. Now that he is seeking a district seat, Becker told the B.A.R. he is "pretty confident" of his chances this time out.

Fruen is a third generation resident of Cupertino whose maternal grandparents voted on incorporating as a city in 1955. His parents ended up moving to Santa Clara but he often stayed with his grandparents in Cupertino.

After earning a B.A. in European studies and German with a minor in Italian from UCLA in 2002, he moved back to the Bay Area and graduated from Santa Clara University's law school in 2014. Two years later he opened his own practice, focusing on trademark law.

He and his husband, Clifton Der Bing, a licensed psychologist, are renters in Cupertino who would like to be able to own a home there someday.

"I might be the first person who grew up here to serve on council," Fruen told the B.A.R. in a phone interview this week.

Concerned about the direction of his city, and prompted by the health crisis to reevaluate his priorities, Fruen said he decided to enter the council race in order to enact policies he believes will improve the lives of his neighbors.

"It is a lot easier to get policy passed if on the dais than if in the public making comments, writing letters and creating popular pressure for a particular policy outcome," he said. "You can also ensure the conversation on the dais includes viewpoints not being represented."

His biggest concern is that current city leadership espouses anti-housing views, which Fruen believes is having a broadly negative impact. Not only is the local school district struggling with declining enrollment as families are priced out, he argues it is also depressing sales for local businesses as there is less of a customer base in the city.

"Our city is aging. People don't spend the same way they do when they have kids or are a young couple," he pointed out. "It is an artifact of the unaffordable cost of living here. If we can help solve that problem, we can resuscitate our small business community in our city."

The two are both running against their local political establishments and are opposed by the mayor of their cities. Coincidentally, each received a bit of news coverage over rainbow-flag flaps involving their mayors this summer.

In June, Becker made headlines after he was barred from attending the city's Pride flag raising ceremony as a stand-in for the vice mayor who had a scheduling conflict. City staff pointed to an obscure rule that his participation needed to be approved by the council, and as the website San Jose Spotlight reported, Mayor Lisa Gillmor informed Becker he could only observe the ceremony if he took "proper social-distancing precautions."

For Fruen it came in August when Cupertino Mayor Steven Scharf, who is running for reelection to one of the two council seats on the ballot next month, gave his supporters yard signs bearing a rainbow flag motif. It not only raised eyebrows but was seen as a dig against Fruen as San Jose Inside reported.

The upside, however, was a bump in campaign donations for Fruen, who told the website some residents did so to protest Sharf's co-opting the LGBTQ community's symbol for his own behalf.

Should Becker and Fruen win election, they won't just be breaking through a pink political ceiling but shaking up their cities' power structures.

Web Extra: For more queer political news, be sure to check http://www.ebar.com Monday mornings for Political Notes, the notebook's online companion. This week's column profiled the new president of the League of California Cities' LGBTQ Caucus.