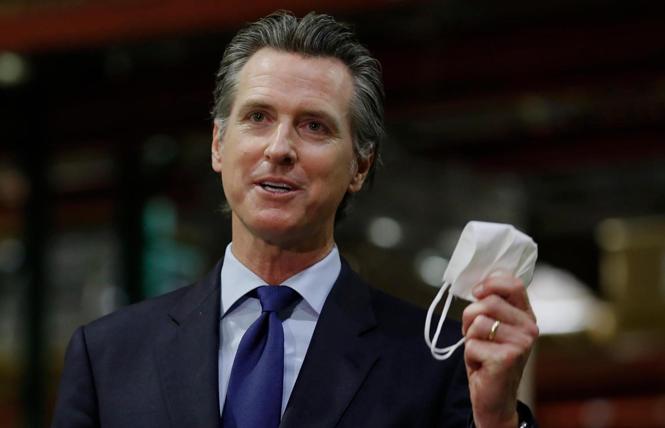 Governor Gavin Newsom held a face mask as he urged people to wear them to fight the spread of the coronavirus during a June news conference in Rancho Cordova, California. Photo: AP/Rich Pedroncelli, Pool

This week, California Governor Gavin Newsom announced that he had created a scientific safety review workgroup to advise the state on COVID-19 vaccines. Normally, the country would rely on the federal Food and Drug Administration to approve any vaccine. But thanks to President Donald Trump's consistent failure to deal with the pandemic, states do not have confidence that any FDA decision would be made solely on the efficacy and safety of a vaccine.

Already, several promising clinical trials of vaccine candidates have been paused, which is routine during the test phase when problems are discovered. Trump has consistently been beating his drum that a vaccine would be available before the November 3 election — an impossibility that is simply a desperate ploy for votes. The president has also severely undermined the country's public health agencies and leaders, from the Centers for Disease Control and Prevention to Dr. Anthony Fauci, the nation's top infectious disease expert. The public's loss of trust in federal agencies by Trump's failure to communicate accurately about vaccines was summed up by California senator and Democratic vice presidential candidate Kamala Harris when she said at her debate with Vice President Mike Pence a couple of weeks ago, if doctors determined a vaccine was safe, she would be "the first in line" for it.

That's exactly right. The president, who had his own bout with COVID-19, left Walter Reed National Military Medical Center without an appreciation for prevention measures such as face coverings and maintaining social distance. He remains unrepentant and still flagrantly flouts these practices that have been shown to reduce the spread of the novel coronavirus. In short, we can't trust Trump or his politically appointed officials when it comes to public health.

Newsom, on the other hand, is prudent to take a cautious approach to a vaccine. His workgroup, which includes San Francisco Health Officer Dr. Tomás Aragón, and doctors from Stanford, UCLA, UC San Diego, and other institutions, is a key piece of the state's initial COVID-19 vaccine distribution plan, according to a press release from his office. That plan was submitted to the CDC last week.

Golden State residents shouldn't think, however, that a vaccine will be widely available soon. It almost certainly will not. The governor and health officials have prioritized those who will receive it first: those at highest risk of becoming infected and spreading COVID-19. "While a small number of doses of an FDA-approved vaccine could be deployed before year's end, the reality is that the COVID-19 pandemic will be with us well into 2021 — and widespread vaccine distribution likely won't occur for many months," stated Dr. Erica Pan, the acting state public health officer.

The governor's 11-member workgroup will independently review the safety of any vaccine approved by the FDA before it's distributed. And California is not alone. The San Francisco Chronicle reported that at least six other states and Washington, D.C. plan to independently review vaccine safety and efficacy. And, while it's unlikely that an FDA-approved vaccine would be found unsafe, Newsom is right in taking this extra step to confirm the results — a necessary waste of funds for states because the president has purposely cast doubt on the impartiality of the federal health agencies he leads.

In the meantime, we should all continue wearing masks and staying physically distant from others, especially as Mayor London Breed announced Tuesday that San Francisco is now in the yellow tier, the least restrictive, and the only county in the Bay Area to have met that goal. That's a major accomplishment and is due to residents' commitment to following public health guidelines and the work of public health officials, doctors, nurses, and others. As Pan stated, "Across the country, states are seeing increases in COVID-19 transmission, but thanks to Californians' adherence to our public health guidance and our slow and stringent reopening, that hasn't happened yet here in California."