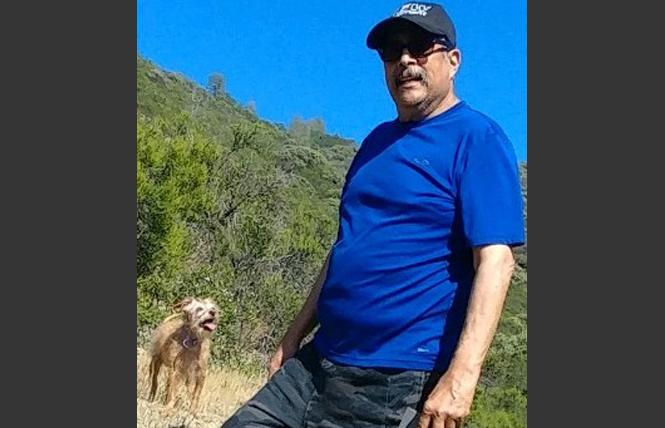 Santos Rangel and his dog, Daisy.

September 16, 1956 — September 29, 2020
On the morning of September 29 at 2:23 a.m., Santos Rangel died peacefully at home with his partner, Don, and his close friend, Tony, after a very difficult three years battling myeloma. Santos faced his cancer as with much of his life, with humor, kindness, humility, and love.

Santos was a second-generation native Mexican American, growing up in the Bay Area and attending his first gay Pride in San Francisco while still in high school. He was an active part of the leather community, having been a lifelong member of the Phoenix Uniform club, for which he held several offices.

He loved the outdoors and taking annual trips to Yosemite to hike and camp. Santos also loved a good brownie and was equally happy to share.

He had many friends, some from his childhood, many through his activities with the Phoenix, and others through his work at AT&T. Santos spent many days with his beloved Aunt Jessie until she passed.

In addition to Don and Tony, Santos is survived by his dog Daisy, his childhood friend Terrell, his ex David from Australia, many friends from the Phoenix and elsewhere including Jimmy, Curt, Warren, Steve, Brett and Joe, and his friend Marco in Los Angeles.