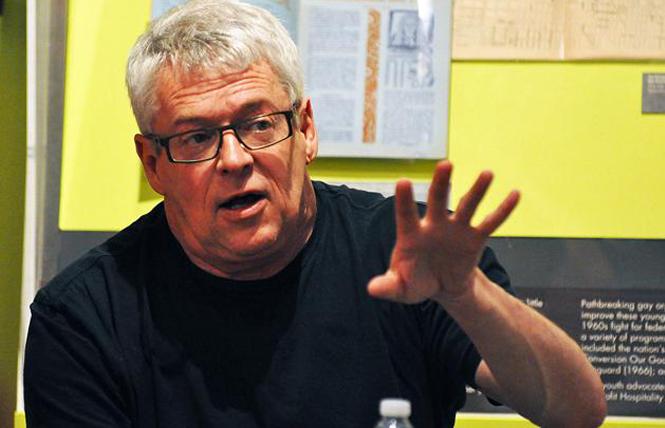 As the world passes the grim milestone of 1 million COVID-19 deaths — one-fifth of them in the United States — activists are moving beyond the statistics to the people affected by planning a week of mourning for the victims.

Kristin Urquiza, a bisexual San Francisco woman who lost her father to COVID-19 and became nationally recognized after speaking at this year's Democratic National Convention, is joining forces with longtime gay activist Cleve Jones, the founder of the AIDS Memorial Quilt, to put together the week of mourning from October 4-11.

Urquiza lost her 65-year-old father, Mark, to COVID-19 on June 30. In an obituary for him, Urquiza cast blame on politicians who refused to "acknowledge the severity of this crisis."

It was then that the 39-year-old resident of the Richmond district was contacted via Twitter by "someone with the Democratic National Committee," she told the Bay Area Reporter.

"I did research and saw they were very connected with [Democratic presidential nominee] Vice President Joe Biden," she said. "That began a conversation to see if it'd be a good fit for me to share my story as part of the convention."

During her speech, Urquiza discussed how her father, who lived in Arizona, regretted trusting President Donald Trump — who has admitted to downplaying the threat posed by COVID-19 — after he contracted the virus.

"My dad was a healthy 65-year-old," she said in her remarks. "His only pre-existing condition was trusting Donald Trump — and for that he paid with his life."

Jones, 65, was watching the convention that night.

"I was very moved," he told the B.A.R. "I'm from Phoenix and this woman's story about her dad made me want to reach out to her, so I made calls to friends of mine in Arizona to say how moved I was by her."

To Jones' surprise, Urquiza "follows me on Facebook, is queer, and lives in San Francisco."

When Jones was evacuated from his Guerneville home due to wildfires in August, he and Urquiza arranged to meet at the AIDS Memorial Grove in Golden Gate Park.

Jones and Urquiza decided to plan a special time for people to mourn COVID-19's victims, which grew to a week of mourning when they found similar efforts were already underway planned for early October. 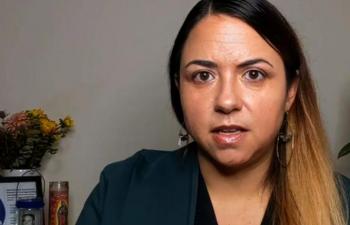 Events planned
The week of mourning will begin in Washington, D.C. October 4 with an art installation on the National Mall, according to Urquiza.

"Over the course of the week we will be hosting a virtual event at 9 a.m. Pacific daily, mirroring what's done at the 9/11 Memorial," Urquiza said, referring to victims of that tragedy. "We will read a selection of names and highlight a number of the folks who have passed."

This event will coincide with a number of virtual and in-person events across the country, a map of which is available online.

The week will end October 11 with a funeral procession and vigil at 5 p.m. at San Francisco's Ocean Beach.

Both Urquiza and Jones said that the physical distancing required to contain the spread of COVID-19 has robbed people of the usual methods of mourning.

"We've had an incredible catastrophe," Urquiza said. "I hope this gives people a tiny bit of space to start their grieving process and have that outlet of mourning."

Jones compared the changes in mourning to what happened to many victims of the AIDS epidemic — the similarities to and contrasts with the COVID-19 pandemic were a major feature of his discussion with Urquiza at the grove, he said.

"During HIV/AIDS we were denied the normal avenues of grieving," he said. "People were rejected by their churches and synagogues, and that was one of the realities that led to the creation of the memorial quilt."

Another similarity, Jones said, is the sense that only certain people have to be worried about contracting the viruses.

"We heard endless statistics of gay men, hemophiliacs, African Americans," Jones said. He said some people have the attitude that "I don't have to behave responsibly because only old people get sick."

In fact, younger people are now becoming sick with COVID-19, as well as people of all ages.

When asked about the cavalier attitude some officials have had toward both viruses, Jones interjected "it's worse than that."

"They mocked the people who were suffering," he said. "That's one of the more dreadful parallels — both epidemics started with Republican presidents who didn't just not address it, they mocked it. I saw bumper stickers that said 'AIDS: It's killing all the right people.' Who's dying of COVID? Old people, Black and Brown people. It's this othering. When the president calls it the 'Kung flu' or the 'China virus,' I'm reminded of when HIV was a 'gay disease.' Most of the people who died in this country of AIDS were gay and bisexual men, but worldwide — because we labeled it as a gay disease and failed to respond — the result of that was the deaths of millions of heterosexual men, women and their children around the planet because the only nation on earth that had the resources to respond failed because of homophobia and racism."

Urquiza's organization, Marked By COVID, has put up a number of signs in the Castro's traditional mourning site on the side of the Bank of America building at 18th and Castro streets. She said she is happy to be working on the week of mourning with Jones.

"Living here in San Francisco I knew who Cleve was and about the quilt, ACT UP, and the other groups of that era," she said.

Urquiza announced a group of organizations that will be working to help put on the week of mourning, including PoderLatinx, Mijente, USPIRG, the Center for Popular Democracy, the March for Our Lives, and the COVID Memorial.

"We're very glad to be joining the week of mourning. Our goal is to help tell the stories of those we've lost in a way that reaches as many people as possible. We want everyone to recognize that the friends, family, and neighbors we've lost to COVID are not numbers, and they are not forgotten," a spokesperson with the COVID Memorial who only identified themself as Duncan stated. "The memorial will be organizing projections of the stories we've collected during the week, so that we can share those stories as widely as possible."

"For the past six months, we have mourned our loved ones in silence," González wrote in an email. "During the week of mourning, we are coming together whether socially distanced or virtually to participate in the deeply-held, life-affirming tradition of honoring our dead. Yet, no healing can come without a resolve to do what is necessary to protect the living.

"The Trump administration's gross mismanagement and willful neglect amount to nothing short of state violence. In the name of our ancestors, on whose shoulders we stand, we will make ourselves heard," she added.

Urquiza said she is always happy to share her story.

"One of the things that's important to me is humanizing the loss we've been experiencing," she said.