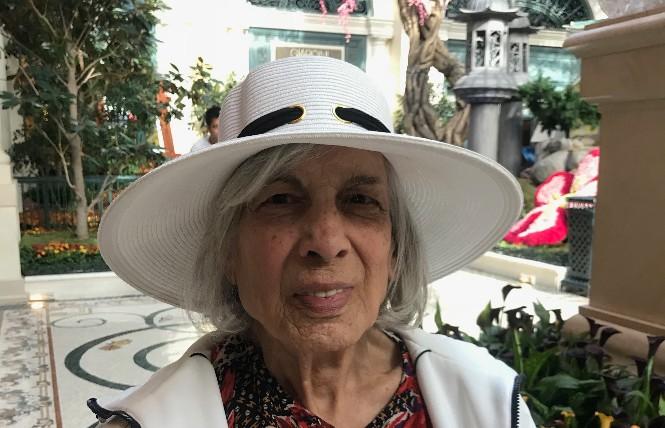 Denise D'Anne, a transgender woman who once served as co-president of the Harvey Milk LGBTQ Democratic Club and was a longtime city employee, died Wednesday, September 2. She was 86.

A cause of death was not given by Geoffrey Scott, who was an "adopted" grandson of Ms. D'Anne's. Ms. D'Anne died at her home in the city's Mission district, he said.

"I met her in 1995 and everyone would call her 'grandma' at the recycling center," Scott told the Bay Area Reporter in a phone interview September 3. "We informally adopted each other."

Ms. D'Anne realigned her gender identity in 1968, and was an early pioneer in the transgender movement.

She served as Milk club co-president in 2010, according to a list of past leaders on the club's website.

David Waggoner served with her as co-president.

"I am sorry to hear of Denise's passing," he wrote in a Facebook message. "She was a powerhouse and a trailblazer and it was an honor to serve with her as a co-president of the Milk club. She is one of the last in a long line of trans and gender-nonconforming legends of San Francisco, from Vicki Marlane to José Sarria. I am grateful to have known her and to have witnessed her unreserved passion for justice for all."

"We are all deeply saddened to hear that our dear friend Denise D'Anne passed away," Haaland wrote in an email to the B.A.R. "She was a lifelong champion for the environment, labor, the LGBT community, renters, and so many social justice causes.

"She consistently pushed us all to do the right thing, and spent her entire life in service to the community," Haaland added. "Our world is diminished by this loss of a true progressive trailblazer. She remains alive in our hearts."

Scott said that Ms. D'Anne arrived in San Francisco in 1970. She became a city employee in what would become the Department of Human Services. She was a member of Service Employees International Union Local 400, where she served as shop steward, editor of the Local 400 newspaper, and a member of the executive board. She helped write new bylaws that, at her insistence, included a clause banning discrimination based on sexual orientation.

Over the years, her obituary noted, Ms. D'Anne stalwartly defended union interests on local and state ballot initiatives, and took a leadership role in the fight for pay equity. In addition to speaking in various forums, she contributed op-ed pieces defending the rights of workers, especially women and minorities.

In 2019, the San Francisco Living Wage Coalition honored her as Labor Woman of the Year.

As an active member of the National Organization for Women for many years, Ms. D'Anne worked to pass the city ordinance establishing the Commission on the Status of Women. She also helped establish the Women's Building and the Women's Credit Union, and was an executive board member of the Democratic Women's Forum, her obituary noted.

In 2007, San Francisco Tomorrow honored her as an Unsung Hero for her role as a pioneer in the city's recycling program.

According to her obituary, Ms. D'Anne was born Anthony Albanese in New York City on November 30, 1933. Originally from Brooklyn, she spent most of her childhood on the East Side of Manhattan in an Italian immigrant community of modest means. Her mother was a chef, who instilled in Ms. D'Anne a lifelong interest in fine food.

Scott said that as Anthony, Ms. D'Anne served in the U.S. Army in Europe, and in the early 1950s settled in Los Angeles, where she worked for a railroad company and earned a degree in political science from Los Angeles City College.

Unfortunately, Ms. D'Anne left behind no living relatives. In her final years Scott and his partner, David Scott, cared for her. She was well-loved in San Francisco, not just in the LGBTQ community but also among environmental and labor activists of all persuasions.

"She was really proud of who she was," Geoffrey Scott said.

Geoffrey Scott said that he and others are putting together a short documentary on Ms. D'Anne's life. The pandemic has made it difficult to talk to people, but he said that he hopes to resume work on the project when it's safe to do so.

A memorial service for Ms. D'Anne is planned for the spring of 2021 and will be announced at that time. Those wishing to be notified of the memorial service should send an email message to that effect to thegreenladydenise@gmail.com

Updated, 9/4/20: This article has been updated with additional comment.